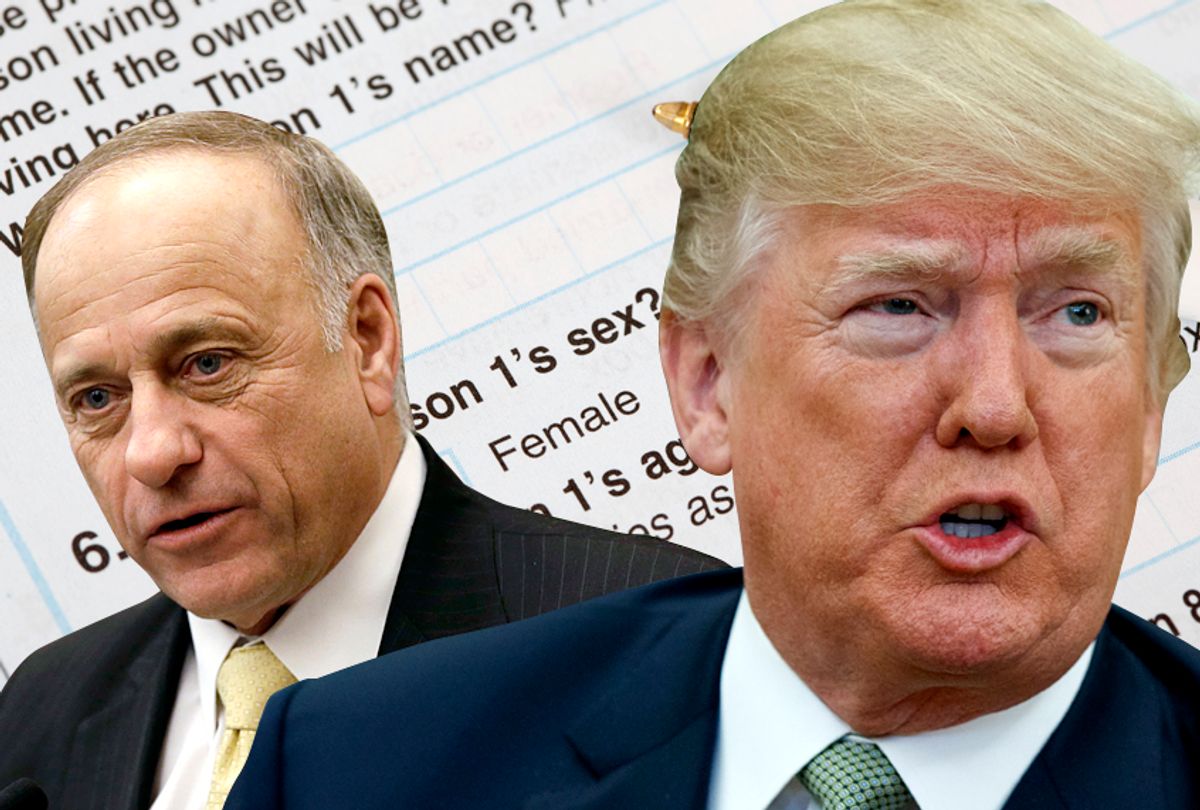 Despite continuing internal confusion in the Trump administration — so what else is new? — Trump will apparently not become the first president in U.S. history to delay the decennial census. Less than 24 hours after warning that he is still “trying to do that,” Trump has reportedly abandoned his nearly two-year long battle to politicize the census by including a question about citizenship status.

To muddy the issue further, of course, Trump turned to Twitter on Wednesday to claim that the administration was not doing what it officially announced it was doing the previous day:

Pushed by hardline conservatives like former Kansas Secretary of State Kris Kobach and former White House adviser Steve Bannon, the proposed citizenship question is part of Republicans’ long game to redistrict themselves into uncontested power by attempting to disenfranchise or erase large numbers of nonwhite immigrants.

Commerce Secretary Wilbur Ross, who oversees the Census Bureau, claimed that by adding the citizenship question, he was “responding solely to the Department of Justice's request" for information to better enforce the Voting Rights Act.

"There’s no evidence in this record that the secretary [of Commerce] would have asked this question had the Department of Justice not requested it," Solicitor General Noel Francisco argued in front of the Supreme Court.

This was almost certainly a bald-faced lie. It was later revealed that Ross himself had asked the Justice Department to send such a letter after Kobach proposed wording for a citizenship question in a July 2017 email. Chief Justice Roberts called the Trump administration's explanation “contrived.”

While the Trump administration argued in court that there was not enough evidence that the question would decrease the response rate, research from the Census Bureau itself shows that Latinos in the U.S. were undercounted by 1.5 percent in the 2010 census, and African Americans by nearly 2 percent. Republicans in Congress have since directed the bureau to spend no more on the 2020 Census than it did 10 years earlier, which they likely thought was a stealthy way of ensuring the results were equally inaccurate.

The late GOP redistricting strategist Thomas Hofeller played a substantial role in pushing Republicans to take up the crusade to add the citizenship question as a means to rig the next round of redistricting, according to documents uncovered by his daughter after his death and later provided to advocacy groups. Congressional and legislative districts are traditionally drawn based on the total number of residents found by the census, not the number of citizens or voters. Hofeller conducted a 2015 study and drawing such districts entirely on the basis of citizenship would advantage “Republicans and non-Hispanic whites.”

Trump's Wednesday tweet claiming he hasn't caved after all was likely aimed at Republicans who are upset that he appeared to be giving up the fight.

Rep. Steve King of Iowa, a notoriously racist Republican, called on Trump to "delay the census until you can ask the question." Rep. Chip Roy, R-Texas, called on the president to “ignore” his own lawyers — and the U.S. Supreme Court — and print the census with a citizenship question anyway.

Calls to boycott the census have been circulating on social media ever since the possible addition of a citizenship question was announced in last year, and #BoycottTheCensus began trending on Twitter nationally shortly after the Trump administration's decision was announced on Tuesday.

The president has falsely suggested that the census is meant “to find out if somebody’s a citizen as opposed to an illegal,” when even the Census Bureau itself notes that it does not share information with law enforcement agencies. Despite an apparent defeat on the citizenship question, Trump and the GOP appear to have been successful in spreading the sentiment that a question that would serve to undermine the census actually belongs on the census.

A Harvard/Harris poll released on the same day Trump dropped the question found that 67% of voters said the census should be able to ask whether people living in the U.S. are citizens, including 88% of Republicans, 52% percent of Democrats and  63% of independents. Trump may not have rigged the census this time, but the Republicans’ long game may yet prove successful.