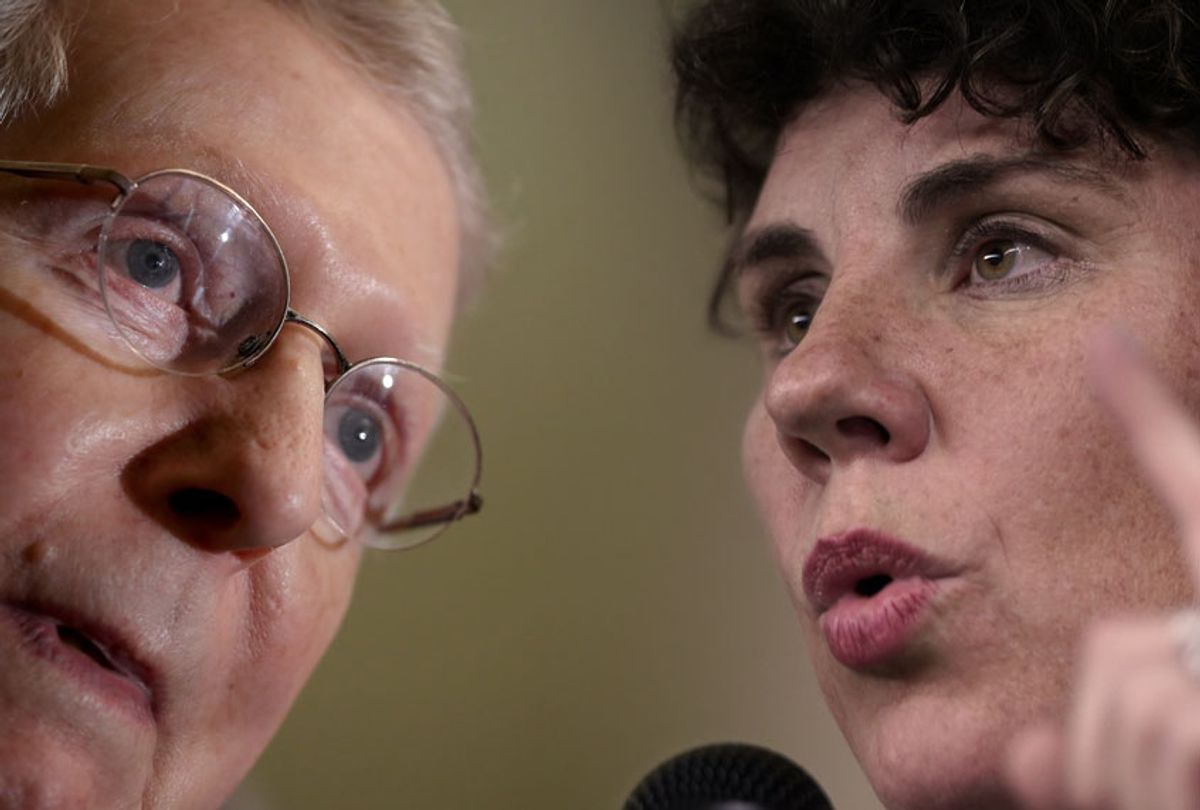 Amy McGrath, the former fighter pilot vying for the Democratic nomination to run against Senate Majority Leader Mitch McConnell in Kentucky next year, raked in $2.5 million in the first 24 hours of her campaign.

McGrath's team confirmed the sky-high figure to NBC News, which campaign manager Mark Nickolas said represents the most ever raised by a Senate campaign in its first day. The campaign noted that more than $1 million of that total was donated within the first five hours of its announcement, and the average donation was $36. The previous record was the $1 million netted by former NASA astronaut Mark Kelly when he announced his candidacy for the Senate in Arizona earlier this year, according to the Democratic Senatorial Campaign Committee.

The entirety of the $2.5 million in donations came in the form of online contributions, with checks and promised contributions not being counted in that figure. McGrath previously flexed her fundraising muscles in 2018 when she raised $8 million in the House race against Rep. Andy Barr in which she was narrowly defeated. While McGrath continues to make waves, McConnell is also a formidable fundraiser, having raised and spent more than $30 million in his successful campaign against Democratic rival Alison Lundergan Grimes in the 2014 Senate election.

Speaking to Salon Talks last year, McGrath expressed disappointment with McConnell's Senate leadership, claiming he had harmed ordinary Americans in order to advance his personal or the Republican Party's political agenda. Her comments foreshadowed the message of her announcement video earlier this week, which describes how McConnell allegedly failed to answer letters sent to him by constituents, including "a woman suffering from diabetes who fears losing her health care and coverage for her pre-existing condition; a coal miner forced to retire by black lung disease, who's looking for someone to offer more than words; a student, who can only afford college as long as she can get her federal loans and has no idea how she'll pay off her debt."

"I'm continually disappointed in Mitch McConnell," McGrath told Salon Talks. "I mean, I think there's a pattern when he wasn't in the leadership, when he was in the minority, of obstructing in our country and just basically doing things that hurt people in our country for purely political reasons. And now that he's in the leadership, it's scary to me that — the priorities are what we really throw me. The first priority was the repeal of the Affordable Care Act without any replacement. And to try to push that through without a CBS score, without having the facts of what it would do to people, having to push it through at midnight. That's wrong, that's not America."