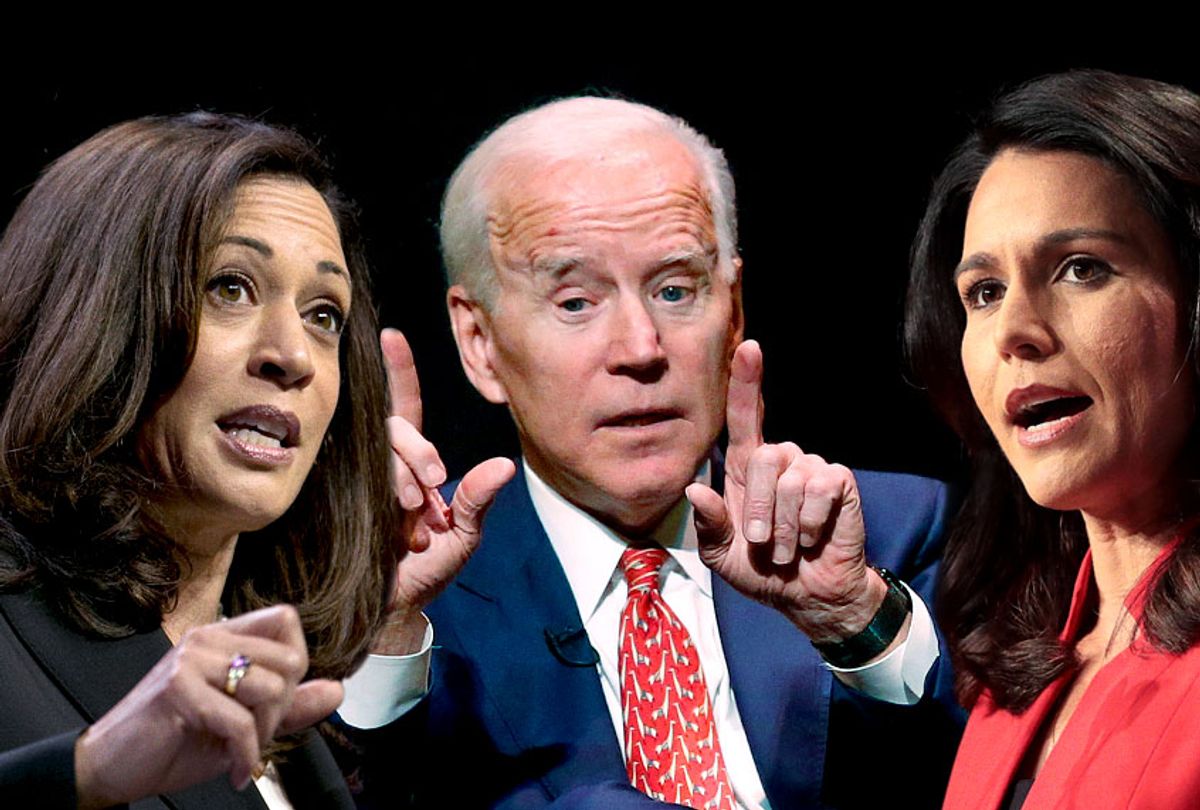 "Really, what she's saying is her position is the same one she was criticizing Joe Biden for. So this is just a political ploy, and I think a very underhanded one, just to try to get herself attention — to move herself up in the polls," Gabbard told CBS News on Monday. "I think that we need to be above that — all of us."

Gabbard claimed that Harris had claimed Biden was a racist "when he's clearly not," an accusation that Harris campaign spokesman Ian Sams refuted in the Hill. "She literally said in the debate, 'I do not believe you are a racist,'" he told the outlet.

When asked by CBS News if she thought there was too much focus on racial issues, Gabbard said, "I think there are still racial injustices and inequalities that exist in this country that we need to address. I think it's important for us to look forward toward the future to see how we can come together as a country — how we can break down these injustices and inequalities and come together and work toward a brighter future. Every single candidate will need to stand up, and speak out and defend their own record."

After confronting Biden on the issue of race during the debate, Harris told the former vice president, "I do not believe you are a racist, and I agree with you when you commit yourself to the importance of finding common ground." She then segued into a personal story about how she had benefited from busing as a child.

"It was hurtful to hear you talk about the reputations of two United States senators who built their reputations and career on segregation of race in this country," Harris told Biden. "And it was not only that, but you also worked with them to oppose busing. And you know, there was a little girl in California who was part of the second class to integrate her public schools, and she was bused to school every day and that little girl was me."

Harris saw a big boost in the polls after the Democratic debate, with many pundits attributing the spike in her support to her viral confrontation of Biden. Yet Harris later aroused controversy among liberals when she told an audience in Iowa, "I think of busing as being in the toolbox of what is available and what can be used for the goal of desegregating America’s schools."

This prompted David Axelrod, the former chief strategist for President Barack Obama's 2008 and 2012 campaigns, to tweet, "It sounds here like @KamalaHarris is now taking something more like the @JoeBiden position on school busing. So what was that whole thing at the debate all about?"

Former second lady Jill Biden also took exception to Harris' comment, telling CNN's Chris Cuomo in an interview that aired Monday that it was the "biggest surprise" so far in the Democratic nominating contest.

"He got into politics because of his commitment to civil rights. And then to be elected with Barack Obama — and then someone is saying, 'You know, you're a racist.' I think the American people know Joe Biden," she said. "They know his values. They know what he stands for, and they didn't buy it."

You can watch Gabbard's full interview below: