Jill Biden says she was surprised by Kamala Harris' attack, but the American people "didn't buy it"

"The one thing you cannot say about Joe is that he's a racist," the former second lady says 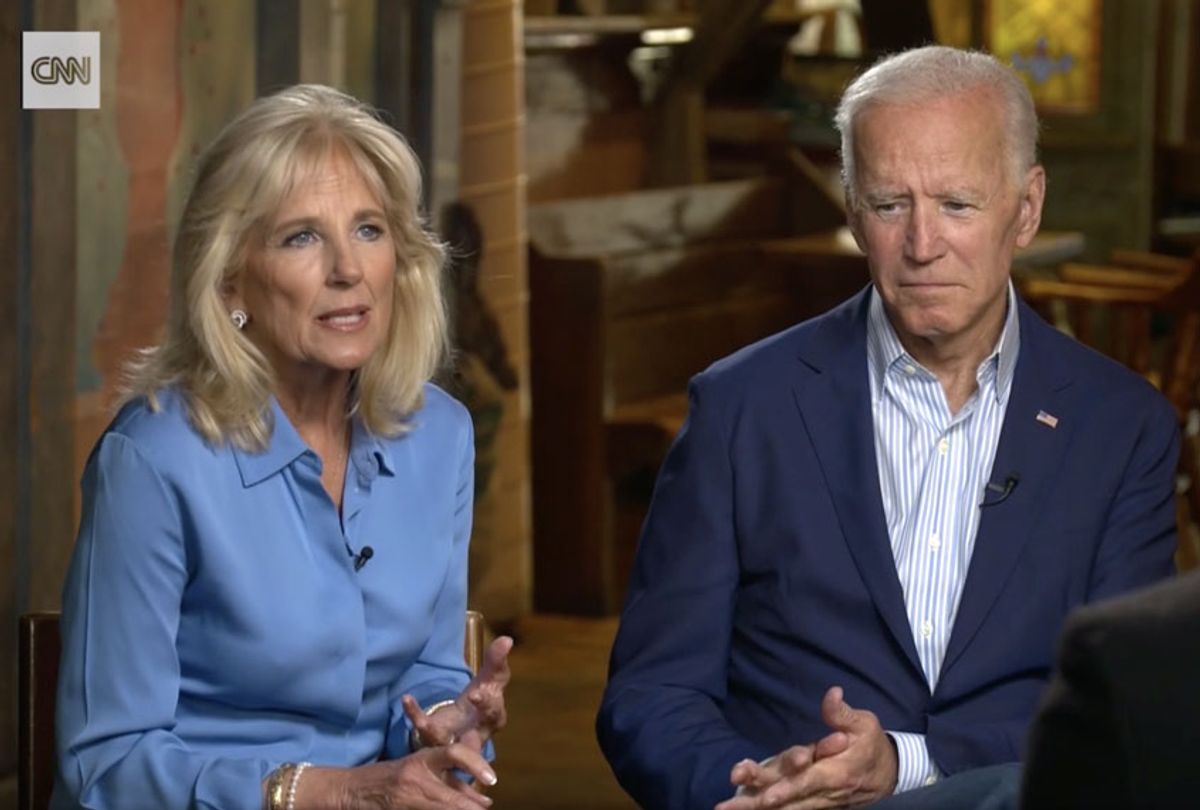 "I mean, the one thing you cannot say about Joe is that he's racist," the former second lady said in an interview with CNN host Chris Cuomo, which aired Monday.

"I mean, he got into politics because of his commitment to civil rights. And then to be elected with Barack Obama — and then someone is saying, 'You know, you're a racist,'" Jill Biden said while sitting alongside her husband. "I think the American people know Joe Biden. They know his values. They know what he stands for, and they didn't buy it."

Jill Biden was referring to the moment when Harris confronted her husband over the issue of race at the first Democratic debate late last month. The freshman senator took aim at Biden over his civil rights record, as well as remarks the former vice president made last month about his "civil" working relationship with segregationist senators in the 1970s.

She also criticized Biden's past opposition to a federal busing policy that provided transportation for black students to local schools attended by mostly white students before describing the experience of "a little girl in California" who traveled across districts as part of the second class of students bused to integrate the public schools in her county.

"And that little girl was me," Harris said. "So I will tell you that on this subject, it cannot be an intellectual debate among Democrats. We have to take it seriously. We have to act swiftly."

Harris recently backtracked on the issue of federally-mandating busing, telling reporters that busing should be "considered by a school district" — a notable reversal from the position she took while sparring with Biden at the Democratic debate. Harris, at the time, told the former vice president that the "federal government must step in" on the issue of busing.

In response to the senator's fiery attacks, Biden has argued that his decades-old opposition to federally mandated busing was "taken out of context." He has sought to defend his position on the policy by reiterating that he was supportive of voluntary school busing and court-ordered busing mandates, but he opposed busing when it was mandated by "unelected" officials. Biden has also claimed he "wasn't prepared" for the way in which Harris confronted him on stage.

Biden apologized Saturday for warmly recalling his memories of working alongside segregationist senators during his time in the Senate — a move he had pointedly resisted for weeks. Speaking to a mostly black audience in the key early-voting state of South Carolina, Biden said he regretted those remarks, which drew criticism from many Democrats and prompted renewed scrutiny of his record on race.

"Now, was I wrong a few weeks ago to somehow give the impression to people that I was praising those men who I successfully opposed time and again?" he asked. "Yes, I was. I regret it. I'm sorry for any of the pain and misconception I may have caused anybody."

The former vice president, however, stopped short of saying that it was wrong of him to work with senators who were staunchly opposed to desegregation as he went on to defend his civil rights record.

"But did that misstep define 50 years of my record for fighting for civil rights — racial justice — in this country? I hope not. I don't think so. That just isn't an honest assessment of my record," Biden said. "I'm going to let my record and character stand for itself and not be distorted or smeared."

Biden began his apology by claiming that the upper chamber "was full of segregationists" in the 1970s and that he did not believe he was wrong to work with "those who we find repugnant to make our system of government work for all of us."

The debate over the issues of busing and school desegregation was thrust to the forefront of the 2020 race after Harris confronted Biden during the first Democratic primary debate, which spanned two consecutive nights in order to make room for the top 20 candidates in the Democratic primary field. The senator's breakout performance was widely lauded, boosting her in post-debate polls — sometimes by double-digits — at the expense of Biden, who saw his lead over the pack of presidential hopefuls shrink substantially.