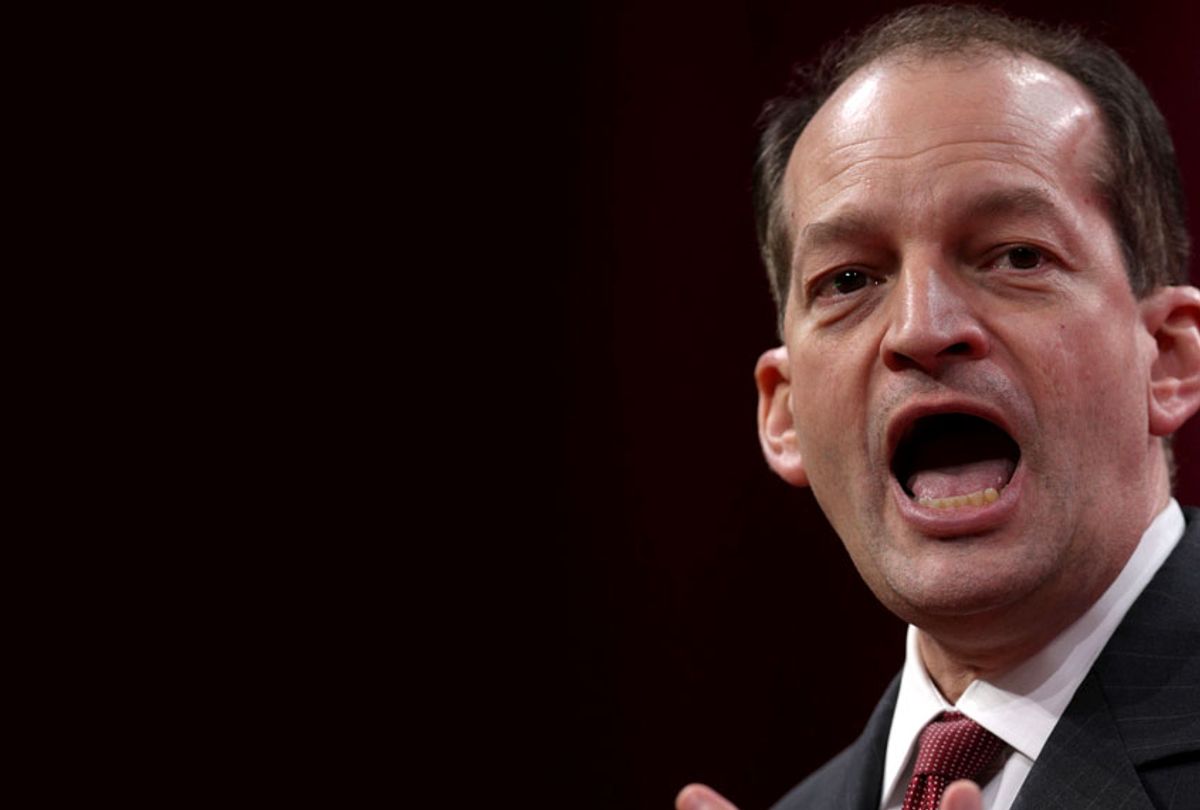 Acosta came under renewed scrutiny in recent days over his role years ago as a U.S. attorney in Miami, during which time he cut a secret non-prosecution agreement in 2008 with billionaire Jeffrey Epstein. A federal probe of an alleged sex trafficking operation involving underage girls was brought to a close, while Epstein pleaded guilty to state charges involving a single victim.

Epstein avoided a federal trial at the time and served only 13 months in prison for state prostitution charges. While he was required to register as a sex offender, he was allowed to leave jail six days a week for 12 hours due to a work release provision.

Federal prosecutors in New York unsealed a new criminal indictment Monday charging Epstein with operating a sex trafficking ring in which he allegedly sexually abused dozens of underage girls, some as young as 14, in New York in Florida. New York prosecutors said their case involves new evidence and new victims, including a "vast trove of lewd photographs" of young-looking girls.

Epstein pleaded not guilty to the charges in Manhattan federal court on Monday afternoon. The arrest brought renewed attention to his earlier plea agreement, which critics have criticized as too lenient.

Appearing with Trump on the White House South Lawn, Acosta said he called the president Friday morning to tell him of his decision to resign.

The president praised Acosta as a "great labor secretary — not a good one" and a "tremendous talent."

"This was him — not me," Trump said of the resignation decision. "I said to Alex, 'You don't have to do this.'"

Trump also tweeted Friday: "Alex Acosta informed me this morning that he felt the constant drumbeat of press about a prosecution which took place under his watch more than 12 years ago was bad for the Administration, which he so strongly believes in, and he graciously tendered his resignation."

"Alex was a great Secretary of Labor and his service is truly appreciated," the president added, noting that Acosta would be replaced on an acting basis by the current deputy secretary, Pat Pizzella.

In the wake of Epstein's arrest, Acosta tweeted Tuesday: "The crimes committed by Epstein are horrific, and I am pleased that NY prosecutors are moving forward with new evidence."

The new charges prompted dozens of top Democrats, including Speaker of the House Nancy Pelosi and Senate Minority Leader Chuck Schumer, to call for Acosta's resignation from Trump's Cabinet.

Trump said earlier this week that "a lot" of people were involved in the 2008 case, in addition to Acosta, for whom he felt "badly."

"I do hear that there were a lot of people involved in that decision," the president said. "Not just him. I can only say this from what I know and what I do know is that he's been a great — really great secretary of labor. The rest, we'll have to look at it. We'll have to look at it very carefully. But you're talking about a long time ago and again it was a decision made, I think, not by him but by a lot of people. So we're going to look at it very carefully."

Trump, who has previously described Epstein as a "terrific guy" who "likes beautiful women," also attempted to distance himself from the financier, saying he was "not a fan" and that the two had a "falling out" years ago.

During his Senate confirmation hearing in March 2017, Acosta defended his record as a U.S. attorney and addressed his decision to not indict Epstein on federal charges.

"At the end of the day, based on the evidence, professionals within a prosecutor's office decided that a plea that guarantees someone goes to jail, that guarantees he register [as a sex offender] generally and guarantees other outcomes is a good thing,'" Acosta said at the time.

You can read Acosta's full letter of resignation below: