"Stranger Things 3" gives us a meaner Hopper, and we're not loving it

Discussions about retrograde masculinity are so 2019, but sadly the 1985 Jim Hopper fits the bill 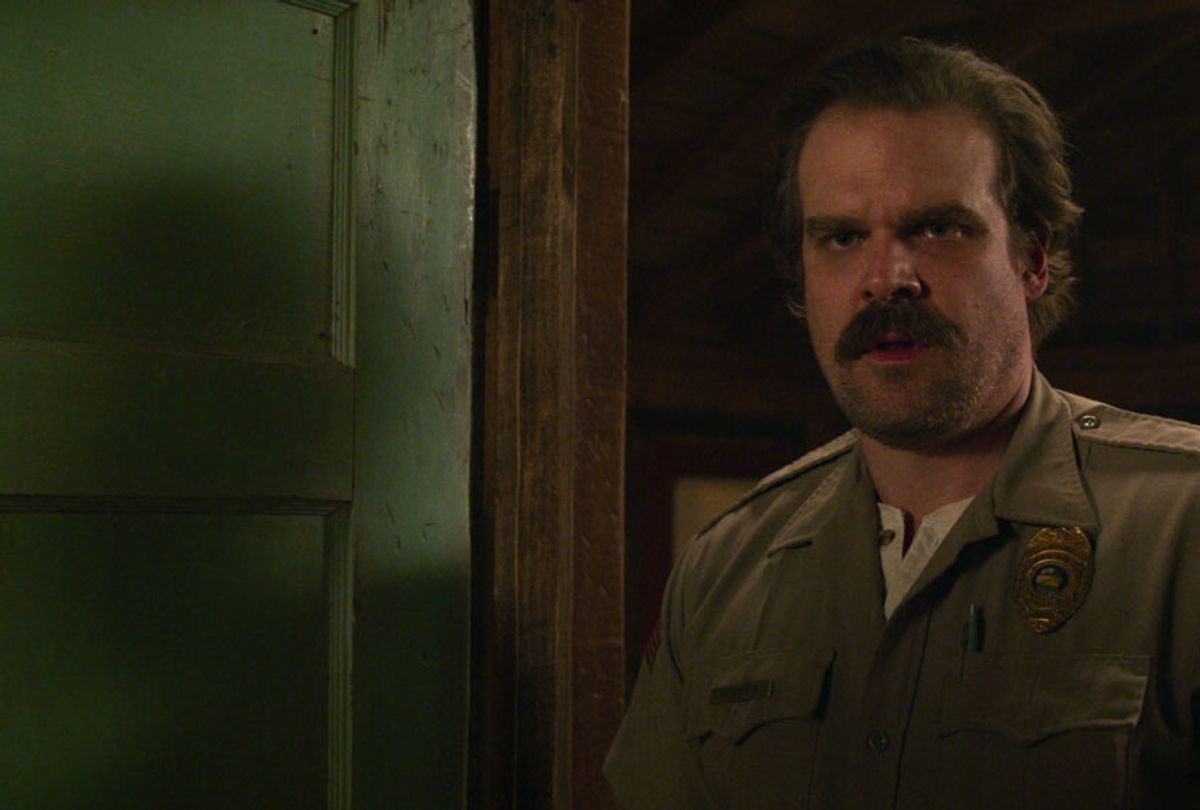 For a moment, let us contemplate the dad bod — the abdominal pudge, the softened jaw-line, the comfortable burliness. Entire industries exist to combat this side-effect of middle age, marketing to frets over decreased virility and sex appeal, lost youth and the inevitability of decrepitude. None of those supplement commercials mention the cuddliness, though.

Dad bod might not play well on the beach, but on a couch at the end of a long day, there are few better things to lean against. It is reviled; it is beloved.

For better or worse, “Stranger Things” hero Jim Hopper is Mr. Dad Bod of Summer 2019, and whether that’s a good thing depend on where you stand on Hawkins’ chief of police by the end of the third season.

David Harbour’s heroic cop probably didn't enjoy more onscreen time this season than other characters, but his sheer abrasiveness took up enough space to make it feel like he did — and not in a good way.  Hopper is a leathery work in progress, a man whose young daughter died and marriage failed, softened by a getting a second chance at parenting after taking in Eleven (Millie Bobby Brown). But in the show's third season he's combative, even with friends,  punch-happy and contentious enough to divide fans.

Either he’s a hero, or a toxic Fat Rambo (as Alexei the would-be Russian defector nicknames him), or more like the domineering lawmen Actual Rambo would have battled in “First Blood.” The Hopper of season 3 wears his internal softness on his exterior, and not proudly. He seems quicker to anger and less likely to compromise.

Honestly, maybe it's us. We may have expected too much of the fictional man in part because the actor who plays him seems like the kind of guy many viewers want to share a beer and, what the heck, a life with. But Hopper, attractively imperfect soul that he is, also is a figure of his time — rather, the films and TV series of his time. Like every other occupant and cranny in “Stranger Things,” Hopper is an amalgam of 1980s good guys and movie and TV dads, the father figures who reflected the best traits of our own parents or fantasies of what we wished our fathers were.

For the most part, he lived up to that portrait in the first two seasons. Well, moreso in season 1 than 2, when we also were reminded that in addition to being a cop, Hopper's a weird misanthrope who lives in a secluded cabin in the woods, where he unsuccessfully hides a girl who isn’t his biological daughter.

And here's where the question of what was in fashion three decade ago crashes against today's standards. Although nostalgia for 1980s pop culture is in fashion, we’re also witnessing a new assessment and redefinition of masculinity, a lens that does not favor the latest updates to Hopper’s character profile.

A man introduced in season 1 as a gruff, lonely alcoholic has transformed into a controlling paternal figure who would rather scare off El’s boyfriend Mike (Finn Wolfhard) than attempt to navigate the adolescent compulsion to make out. And we'll admit, that part was funny in a classic, overly protective dad kind of way.

But even the woman Hopper carries a torch for, Joyce Byers (Winona Ryder), is not spared his bitterness.  Joyce has gone through as much of an emotional wringer as Hopper, if not more, and more recently. When she stands him up for a date he pushes her into accepting, he refuses to let her off the hook. Even when they’re in the middle of a mission to save their kids and the world, he take every opportunity to gripe about her ghosting (which, by the way, she did for very good reasons).

Their incessant arguing is a cover for unresolved sexual tension, of course, and in case we don’t get that, Hopper’s conspiracy-obsessed pal Murray (Brett Gelman) annoyedly says as much to silence an argument that’s making an anxious, dangerous car trip towards a final battle with well-armed Russians that much more unpleasant.

But there’s fun, “Moonlighting”-style bickering as a foreplay substitute, and there’s the version Hopper reels Joyce into, which feels unfair, diminishing and mean-spirited, considering Joyce is still mourning Bob Newby (Sean Astin), a gentle, doting nerd who was entirely made of dad bod. In many ways Bob is — was — the anti-Hopper, a man who reveled in his softness instead of battling it, and who sacrificed his life for the people he loved.

So on some level, the Fat Rambo act isn’t merely a guise employed against Soviet adversaries attempting to infiltrate all-American Hawkins, unleash the Upside Down and endanger his daughter. It’s the flailing of a man at war with his own vulnerability, which only emerges again after he appears to be gone, and in the form of a letter.

Just as irksome about this change in a favorite "Stranger Things” character is that we’re witnessing it in the midst of a series that has demonstrated an evolved depiction of masculinity in spite of its initial underdevelopment of its girls and women. In season 3, Hopper sits near the extreme end of a wide spectrum of male personalities, uncomfortably close to the side occupied by Dacre Montgomery’s rage-filled Billy and Cary Elwes’ awful Mayor Kline,  with Joyce’s sons Will (Noah Schnapp) and Jonathan (Charlie Heaton) resting on the opposite end.

All of the boys in the third season of “Stranger Things” are in many ways more evolved and idealized than the adults who raise them, when and if we meet those adults at all, which is of course in line with any number of 1980s PG films. Even Billy behaves with uncharacteristic empathy in the rare time he can shirk off the Mind Flayer’s control (although he’s a problematic character for other reasons).

But this jibes with the centering of the children as the tale’s heroes; El and Mike make out a lot, but they’re still innocents who don’t quite comprehend the opposite sex.  Lucas (Caleb McLaughlin) and Max (Sadie Sink) have a more established relationship, but even Lucas is mystified by women and mostly falls in line with what Max wants out of respect and intimidation.

Steve Harrington (Joe Keery) tries so many times to fulfill popular guy stereotypes over the course of the series and fails. He loses nearly every fight he’s pressed into; he lets go of his relationship with his girlfriend Nancy (Natalia Dyer) peacefully, respecting her agency; he reacts to his friend Robin (Maya Hawke) coming out to him as a lesbian with acceptance and caring. He's a terrific 2019 dude.

Dustin (Gaten Matarazzo), however, delivers the sweetest surprise by not only mentoring Lucas’ sister Erica (Priah Ferguson) in her budding nerdiness, but in not being too proud to sing the theme to “The Neverending Story” — one of the girliest geek fantasy movies — in front of the adults and kids who know him. The fate of the world was on the line, but Dustin could have been embarrassed in the moment even so. Instead, he crooned his heart out with full-throated passion and in harmony.

And yet they are all still very much boys: In a scene when El enters her psychic space to spy on them, they aren’t above cracking farts and giggling at their raunchiness.

Set against all those very modern versions of adolescent masculinity, Hopper comes off as — much as one hates to slap him with this label — toxic.

Early in the season El closes her bedroom door on Hopper to give her and Mike some privacy. When Hopper finally gets it open, she and Mike clumsily and ineffectively play it off as if they’re doing nothing untoward. El has shown him before that there’s not much he can do to stop her. She knows her dad is soft, in other words. Only now, that enrages him more than we’d like to see.

Nevertheless Hopper, wherever he is, is redeemable and doesn’t have to travel far — emotionally speaking — to get back in our good graces.

Even within this season there was the joy of watching Hopper enjoying the heck out of a “Magnum P.I.” episode, and proudly wearing a Hawaiian shirt worthy of his hero. Enamored fans loved these details enough to create memes mashing Hopper into the old Tom Selleck series, and they’re heroes for doing that.

That also makes us pine for the possibility of what could have been if Hopper had won over Joyce by embracing more of his soft center instead of clinging to his anger like a weapon. When all is said and done, many of us would take dad bod Thomas Magnum over Fat Rambo in any circumstance — and in the end, it was his combination of tough guy and gentle soul that saved them all.

In any case, given Hopper’s current circumstances, we're guessing that Season 4 will show us a different man altogether, likely one who is a lot stringier and a good deal stranger. We can only hope some of the old dad we adored remains. A lot of people miss that guy.