"Stranger Things" wants to be everybody's memory and nobody's parable

Stop trying to find commentary on the '80s in "Stranger Things." It's designed to capture feeling, not history 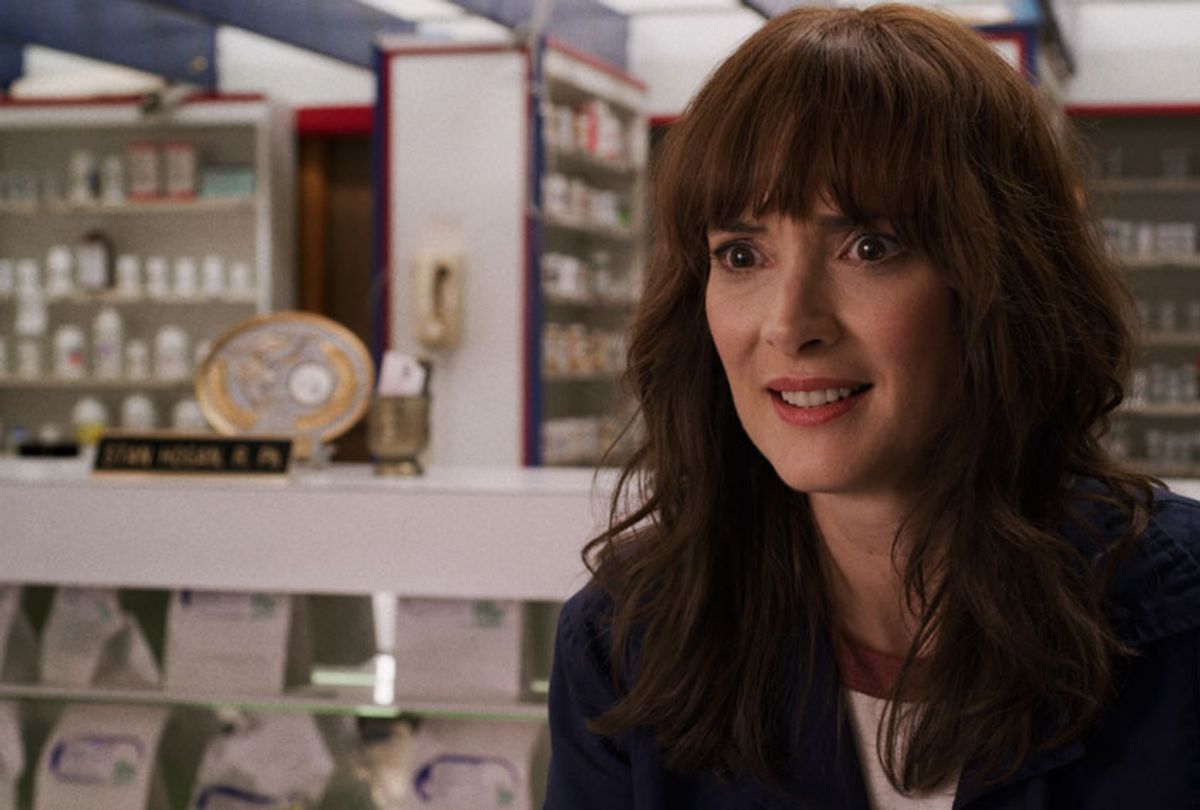 Those seeking parallels between the version of 1985 depicted in “Stranger Things 3” and the world of 2019 need not look far. The season premiere drops us into the center of Starcourt, Hawkins’ shiny new mall where all the kids run free and enjoy their favorite pastimes — movies, games, ice cream served up by high school hero Steve Harrington (Joe Keery). Soon after we witness the effect of the mall’s arrival on Joyce Byers (Winona Ryder), one of the few townsfolk who still works in the largely abandoned downtown shopping district.

We meet the mayor of Hawkins, Larry Kline, a corrupt and vain politician played by Cary Elwes who abuses his office to secure land grants that favor the shadow company behind Starcourt. And we soon come to discover that this company is actually a front for the Soviet government, with whom Mayor Kline is secretly . . . colluding.

Matt and Ross Duffer seem to be making several commentaries here, but Elwes insists in multiple interviews that neither he nor the Duffer Brothers intended Kline as a Trumpian caricature.

Anyone familiar with previous seasons of “Stranger Things” and the analysis published in the wake of their release has no reason to doubt that. Corrupt politicians come in all forms, have appeared in countless movies, and many have pulled strings in real estate to favor powerful allies over average working people. That and Russian meddling were as concerning in 1985 as in 2019.

But in the 1985 of “Stranger Things,” those topics only matter as much as they move the characters from the bucolic summer days leading up to July 4th into the final battle inside Starcourt, a gleaming maze of hiding places, back doors, staff-only hallway access and storage areas big enough to conceal entryways to secret lairs stocked by foreign invaders hiding under our noses — way under.

Sometimes a mall matters more as a plot device than as a commentary on corporate hegemony in 2019 or the choking out of independent businesses at the hand of large corporations. Sometimes a period piece’s focus on Russian meddling is meant as a nod 1984’s small town teens-versus-communists fantasy “Red Dawn” more than a wink at Vladimir Putin’s influence on the current White House administration.

And sometimes a show succeeds simply by being an effective memory and emotion trigger pegged to echoes manufactured by an industry, as opposed to recollections of reality as it was and is.

This is why the Duffer Brothers’ passionate deployment of nostalgia is a virtually unstoppable weapon. But in the way of all such artillery, this approach contains a number of flaws.

Not that the larger audience is noticing, or cares.

Perhaps instead of mining “Stranger Things” for nuggets of relevant cultural parables, we might consider what its declared political and social agnosticism tells us about Gen X and Millennial fans of the series.

More specifically, we might ponder the world that is in part a result of absorbing formative lessons about politics, other countries and unfamiliar people through the limited, specific vision perpetuated by movies and television.

Anecdotally speaking, “Stranger Things 3” is a hit, one that meets fan expectations by plucking out familiar chords on heartstrings attuned to the adventures of Mike (Finn Wolfhard), Will (Noah Schnapp), Dustin (Gaten Matarazzo), Lucas (Caleb McLaughlin), Eleven (Millie Bobby Brown) and Max (Sadie Sink). According to Netflix — and only Netflix — 40.7 million household accounts have been watching the show since its July 4 premiere, “more than any other film or series in its first four days.”

This stat has not been verified by a third party source, as traditional network ratings are. Neither has the statement that 18.2 million had already finished the eight-episode third season by Monday.

Regardless of these numbers, “Stranger Things” is a phenomenon because adults and kids enjoy it for more or less the same reason: Each season is window into a past that never was, but one so many Gen Xers and Millennials yearn to claim.

Making “Stranger Things” a Reagan-period fantasy is central to the series’ sales pitch; children of the ‘80s make up the bulk of Netflix’s subscribers, and it’s smart business to find a series that caters to that cohort's fondest memories — retro-culture’s love affair with “Heathers”-era Ryder being one of them.

Overwhelmingly the ‘80s remain an object of affection in modern popular culture because the people in charge of producing movies and TV also grew up in that time. Even so, recent shifts in culture and politics have produced significant reappraisals of the decade. Marrying the story to the 1980s leads to a number of interpretations, justified or off-base, of what the story has to say about the society and politics of that time.

Beyond dispute, however, is the durability of that particularly decade’s films and their influence.

Cinema buffs aren’t likely to cite the 1980s as the greatest filmmaking epoch, but it may be the era with more of an outsized influence on our modern relationship with movies and TV than any other, due to consumer tech innovation.

To put it more simply, kids who were around the same age as Mike, Will, Dustin, Lucas, Eleven and Max — or even Lucas’ kid sister Erica (Priah Ferguson) — watched a lot more movies at home on VHS, in addition to catching summertime blockbusters. This made it simpler for a lot of them (us) to tune out politics or cultural upheaval, beyond what famous people, movies or TV shows had to say about them.

The “Stranger Things” crew isn’t glued to small screens because they are ‘80s movie-style protagonists, not actual ‘80s children, and generally such characters don’t pay much attention to televisions save for the odd narrative-progressing news report or the device’s potential to serve as an accidental inter-dimensional portal.

But even this benevolent omission partly explains the narrative’s shortcomings — the story doesn't work as a parable of anything because the films to which is pays tribute aren't parables. They're alien invasion spectacles and shoot first, don't question action flicks.

Whether confronting the series’ depiction of race relations, its fantastical depiction of the 1980s as a more innocent time, or drawing allusions between the Upside Down and the dangerous rise of white nationalism, academics and critics have taken numerous shots at the “Stranger Things” exhaust port, only to have these missives glance off the surface. It's tough to take a series to task for flubbing a particular element of social commentary when its entire intent is to capture feeling as opposed to history.

This is why the whole we’d much rather hunt for Easter eggs or episodic homages to favorite films of our youth, or look out for blink-and-you-missed-it period details that the production flubs. (There were no red M&Ms in 1985! Oops!)

Nevertheless, given that “Stranger Things” is intended as a mash-up of genre fiction, it is reasonable to evaluate how well its story lives up to the science fiction and horror tradition of reflecting and critiquing political institutions and the injustice of modern social and cultural systems. And it consistently comes up short here because of the unquestioning moral heart of the films, TV series and timespan it channels.

Every generation engages in games of “remember when,” but Gen X is the demographic raised on MTV and retrospective entertainment, with entire series constructed around appreciation of our toys, favorite cartoons, shows and movies without much interrogation as to why these diversions of existed or what they say about our culture.

So it goes with the third season of “Stranger Things.” Although its overall tone moves farther away from its Spielbergian origins and closer to James Cameron and John Carpenter territory, its devotion to the 1980s black and white concept of good guys and bad guys feels less quirky and retro than repetitive.

But the series also coasts on the fact that the pop culture version of the 1980s has, in fundamental ways, sculpted our concept of history and modern reality. Hawkins, Indiana is nothing if not a vision of “real” America where everyone gets along and no one is judged or penalized for having less or more money than their neighbors. Where there are no outward examples of prejudice except for when an outsider moves to town — and, as seen in this season, he has reasons/excuses for being an abusive jerk. Where communism is as un-American as, well, socialism, because commies are diametrically opposed to the freedom-loving United States. Where anything terrible that happens is the product of dark supernatural forces that only a select few see and fight, almost entirely on their own.

This may be part of the reason why the man most evocative of 1980s materialism and excess, who built his fame on the appearance of being rich and famous, now sits in the Oval Office. Many of us believed the myth about him that TV and films peddled throughout the ‘80s and ‘90s, one that was revitalized and repackaged by a reality show producer in the Aughts.

Through Hawkins, the Duffer Brothers and “Stranger Things” distill and serve an America we thought we all knew and experienced, except those weren’t memories at all. They were someone else's dreams that were scripted and filmed, dreams we bought tickets to and plugged into our VCRs. And they are just that: dreams, with no intended meaning beyond how the audience interprets them.

The third season of “Stranger Things” represents an ending of sorts. Not The End, although its finale may end up marking the finish line for some folks, end-credits cliffhanger tease notwithstanding. But the finale’s developments could not have been plainer about some threads tying off. Will Byers ends his battle to hang on to childhood and what his friends view as childish pursuits by surrendering his Dungeons & Dragons paraphernalia.

Eleven loses her powers, which could just be supernatural powers or a metaphor for the abandonment of childhood magic; who can say?

She moves away from Hawkins with Joyce, Will and Jonathan Byers, leaving her friends and boyfriend Mike behind. She has lost her father, Jim Hopper, in the latest battle with the Upside Down. In other words, it’s time for her and everyone else to face the tougher realities of the adult world, one whose mundane elements don’t reflect actual reality and don't outwardly comment upon it. The way we choose to remember that world is what matters, and as any Xer may tell you, you can’t beat that feeling.