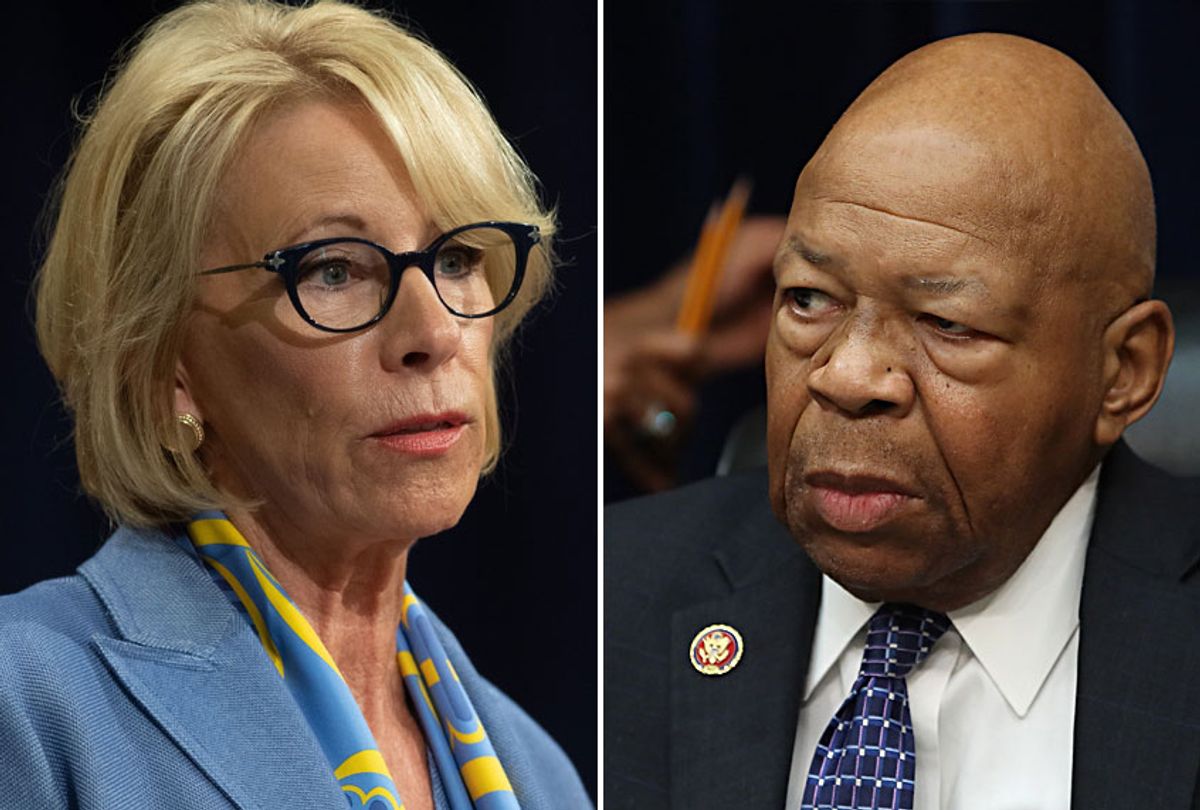 House Oversight Committee Chairman Elijah Cummings has expanded his panel's investigation into Secretary of Education Betsy DeVos, whose use of a private email account has come under scrutiny.

"New information has now come to light indicating that you and other department officials violated the department’s prohibition on using personal email accounts to conduct official business, violated the requirement in the Federal Records Act to forward these emails to your official account within 20 days and violated the requirement in the Freedom of Information Act (FOIA) to produce relevant records in response to public requests," Cummings wrote to DeVos in a letter revealing "disturbing new revelations" about how the secretary allegedly used her private email account while on the job.

According to Cummings' letter, DeVos has allegedly withheld information sought by members of the committee from both parties over the course of the past two years. The inspector general of the Department of Education has claimed that DeVos used her personal email account on a "limited" basis but failed to always properly preserve that correspondence. The inspector general also pointed to an occasion when DeVos' department allegedly rejected a Freedom of Information Act request on the grounds that no "responsive documents" were found relevant to it, even though this was later determined to be not true.

In addition, the letter claims the inspector general discovered that "78 percent of the political appointees surveyed admitted to using personal email and/or messages to conduct official business, which violates the department's prohibition."

The letter closes by asking DeVos to inform the committee if either she or any non-career official at the agency has used personal email, text messages, encryption software or phone-based message applications to conduct official business. It also requests copies of all correspondence involving official business sent through non-government email or other electronic accounts by DeVos or other non-career department officials.

Department spokeswoman Liz Hill responded by writing that the letter was "nothing more than political grandstanding," claiming that there is "nothing more to see here" after the inspector general conducted "a thorough report on this issue."

The questions surrounding DeVos' personal email use is particularly sensitive given the events of the last presidential election. After Democratic nominee Hillary Clinton was revealed to have extensively used a private email server during her tenure as former President Barack Obama's secretary of state, now-President Donald Trump made the controversy a driving force behind his campaign. Since that time, however, Trump administration officials including the president's daughter  have been found to have used private email servers.

This is also not the first time this week that Cummings has made headlines due to Trump officials refusing to acknowledge his authority. On Monday, he denounced White House counselor Kellyanne Conway for refusing to appear before Congress regarding accusations of violating the Hatch Act.

"This is a clear cut case," Cummings said in a statement to Politico. "We are not requiring her to testify about advice she gave the president or about the White House’s policy decisions."

He added, "We are requiring her to testify before Congress about her multiple violations of federal law, her waste of taxpayer funds and her actions that compromise public confidence in the integrity of the federal government."