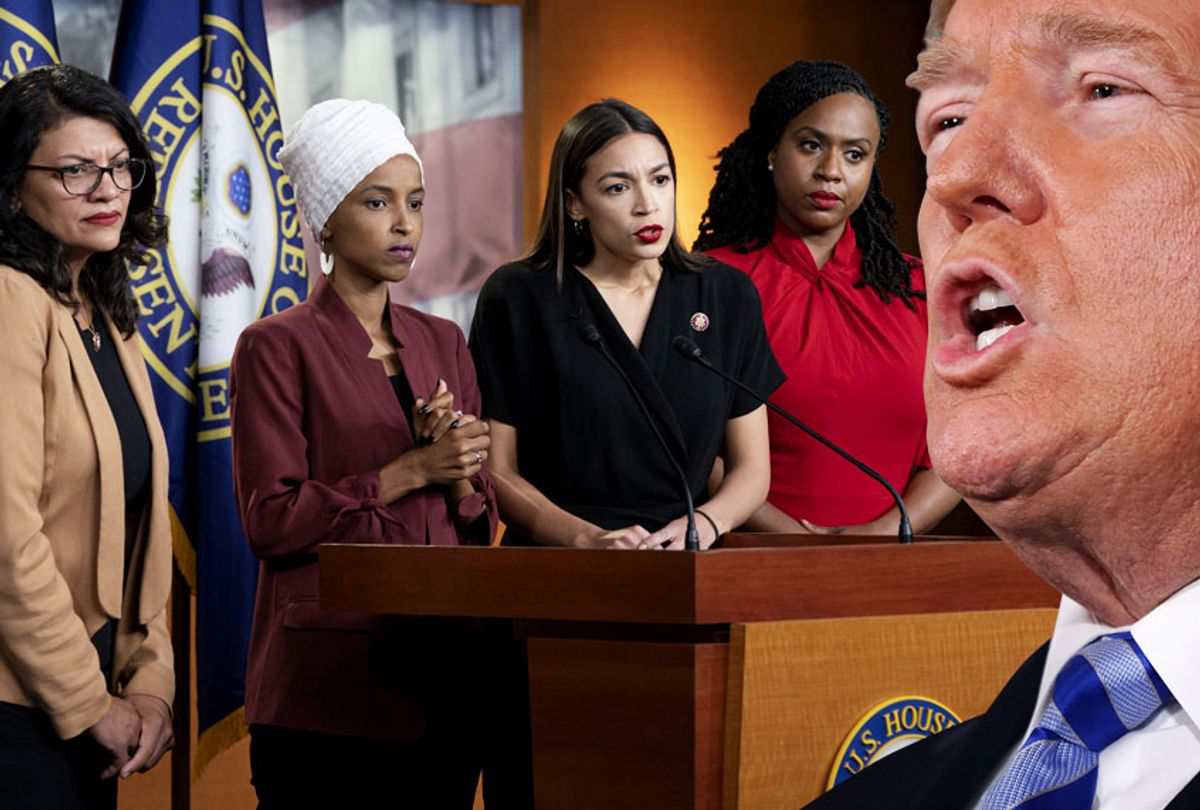 The House of Representatives voted Tuesday on a resolution to condemn President Donald Trump's spate of "racist comments" directed at a group of newly elected congresswomen of color.

The White House and Democrats in Congress have been embroiled in a public feud since the president tweeted Sunday that a group of progressive congresswomen "who originally came from countries where governments are a complete and total catastrophe" should "go back and fix the totally broken and crime infested places from which they came."

Trump did not mention the lawmakers he was criticizing by name, but his comments were widely interpreted as targeting four freshmen lawmakers known as "The Squad," which includes Democratic Reps. Alexandria Ocasio-Cortez of New York, Ilhan Omar of Minnesota, Rashida Tlaib of Michigan and Ayanna Pressley of Massachusetts. The four legislators are U.S. citizens and only Omar, who arrived to the U.S. as a refugee from Somalia, was born abroad.

Trump's comments about the congresswomen have provoked a political firestorm on Capitol Hill, where Democrats and some Republican lawmakers have rebuked the president for his remarks and denounced them as racist.

In his first public comments since the war of words began, Senate Majority Leader Mitch McConnell, R-Ky., told reporters Tuesday afternoon that "the tone of all of this is not good for the country" but declined to describe the president as racist.

"I think there's a consensus that political rhetoric has gotten way, way overheated all across the political spectrum," McConnell said, adding that Trump and members of Congress need to "contribute to a better level of discourse" and that everyone involved needed to "lower the incendiary rhetoric."

When asked by reported what he would do if someone told his wife, Transportation Secretary Elaine Chao, who is an immigrant from Taiwan, to go back to her country, McConnell noted she came to the country legally.

He said Chao "came here at age eight, legally, not speaking a word of English and has realized the American Dream."

"Legal immigration has been a fulfilling of the American Dream," McConnell added. "The new people that come here have a lot of ambition, a lot of energy, tend to do very well and invigorate our country. My wife's a good example of that."

"I'm obviously a big fan of legal immigration. It's been a big part of my family for a quarter of a century," he continued.

Earlier on Tuesday, House Minority Leader Kevin McCarthy, R-Calif., said at a press conference that he did not believe Trump's tweets were racist.

"I believe this is about ideology. This is about socialism versus freedom," McCarthy said, noting that the outspoken congresswomen "talked more about impeachment than anything else" at a press conference on Monday where they responded to the president's tirade.

"This is more from their base, it's about politics, and it's unfortunate," McCarthy said. "We should get back to the business of America."

Rep. Liz Cheney, R-Wyo., the no. 3 Republican in the House, said at the news conference Tuesday that she wanted to make clear the Republican Party's "opposition to our socialist colleagues has absolutely nothing to do with their gender, with their religion or with their race, it has to do with the content of their policies."

Also on Tuesday, Trump tweeted that the four congresswomen "have been spewing some of the most vile, hateful, and disgusting things ever said by a politician in the House or Senate" and asked why the House wasn't "voting to rebuke the filthy and hate laced things they have said?"

In a tweet shared later Tuesday morning, Trump argued that his tweets "were NOT Racist. I don't have a Racist bone in my body!" He also stated his belief that Congress should instead take action on "the filthy language, statements and lies" allegedly shared by the four congresswomen.

Asked Monday if he was concerned that his tweets were being called racist, the president responded, "It doesn't concern me because many people agree with me."

He also accused the four congresswomen of being "anti-America" and said that the lawmakers could leave if they were unhappy with the state of things.

He also mentioned Omar by name, falsely claiming the congresswoman praised the terrorist organization al Qaeda while further accusing her of "hating Jews." Trump also brought up comments Omar made earlier this year about the 9/11 terrorist attacks, which prompted immediate outrage from conservatives and spurred an increase in death threats against the congresswoman.

Omar and her colleagues issued a scathing rebuke to the Trump's attacks in a joint press conference Monday, calling his tweets "blatantly racist" and the "agenda of white nationalists."

Ocasio-Cortez addressed Trump's latest tweets Tuesday, writing on Twitter, "You're right, Mr. President — you don't have a racist bone in your body. You have a racist mind in your head, and a racist heart in your chest."