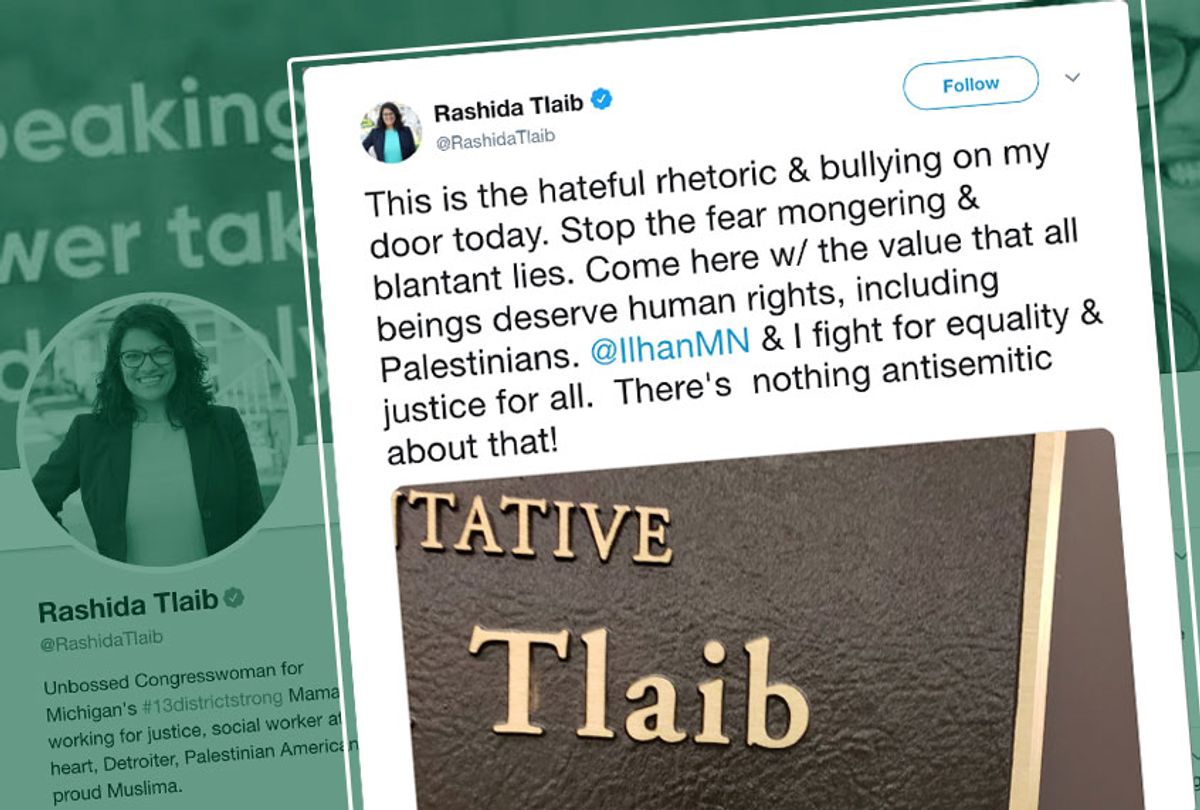 Rep. Rashida Tlaib, D-Mich., one of a handful of outspoken progressive lawmakers among the Democratic freshman class of 2019, shared a photo of a sticky note placed outside her office and addressed to her colleague, Rep. Ilhan Omar, D-Minn., who has been battling charges of anti-Semitism over the past few weeks. The anonymous critic accused the Minnesota Democrat of carrying out "Jihad against the Jews."

"Stop your disgusting Jew hatred," the blue sticky note reads. "Your sign says 'Justice for all' that means Jews too. Your Jihad against the Jews will fail." The note concluded with "Am Yisrael Chai!" which translates to "the nation of Israel lives."

Tlaib, who became the first Palestinian-American woman to serve in Congress in January, posted a picture of the note on her Twitter account on Tuesday, writing, "This is the hateful rhetoric & bullying on my door today. Stop the fear mongering & [blatant] lies." The congresswoman added that she and Omar "fight for equality & justice for all. There's nothing antisemitic about that!"

The sticky note appears to be a response to controversial comments Omar made about the American Israel Public Affairs Committee (AIPAC), a pro-Israel lobbying group, that prompted allegations of anti-Semitism by lawmakers on both sides of the aisle. The Minnesota Democrat, who this year became the first Somali-American and one of the first Muslim women to serve in Congress, has been a vocal supporter of the rights of Palestinians and has voiced her opposition to Israeli policies — from the lobbying influence of AIPAC to West Bank settlements — since she began her tenure on Capitol Hill earlier this year. The refugee from Somalia has been at the center of a political firestorm after she suggested politicians only support Israel to get donations from pro-Israel activists and claimed pro-Israel lobbying groups like AIPAC push "allegiance to a foreign country." Omar has apologized for her comments.

House Democrats scrambled to rebuke Omar's remarks, ultimately issuing two different resolutions in recent weeks condemning anti-Semitism and other forms of bigotry without singling out Omar by name. Efforts by congressional Democrats to admonish a member of their own party were not enough for Republicans, who demanded she be removed from her seat on the House Foreign Affairs Committee. Omar has not been stripped of her committee assignments.

President Donald Trump even seized on the controversy, accusing the Democratic Party of being "anti-Israel" and "anti-Jewish." His comments came after several 2020 Democratic presidential candidates declined to attend AIPAC's annual policy conference, which took place in the nation's capital and wrapped up on Tuesday. Vice President Mike Pence received a standing ovation from the crowd of more than 18,000 people at the event on Monday after he excoriated Omar and 2020 hopefuls for "boycotting" the most prominent gathering of politically-active American Jews.

Omar recently called for a "balanced, inclusive approach" to the Israeli-Palestinian conflict in an op-ed. She advocated for a foreign policy that focuses on "human rights, justice and peace as the pillars of America's engagement in the world — one that brings our troops home and truly makes military action a last resort." The freshman congresswoman explained valuing human rights "means applying the same standards to our friends and our enemies" — an apparent jab at the veteran leaders of her own Democratic Party and Republicans who alleged her criticism of America's closest ally in the Middle East was offensive and invoked anti-Semitic tropes.

In her op-ed, Omar revealed that "peace and respect for human rights" are values which drove her to run for office and persuaded Minnesotans to elect her. "Let us apply these universal values to all nations. Only then will our world achieve peace," she concluded.