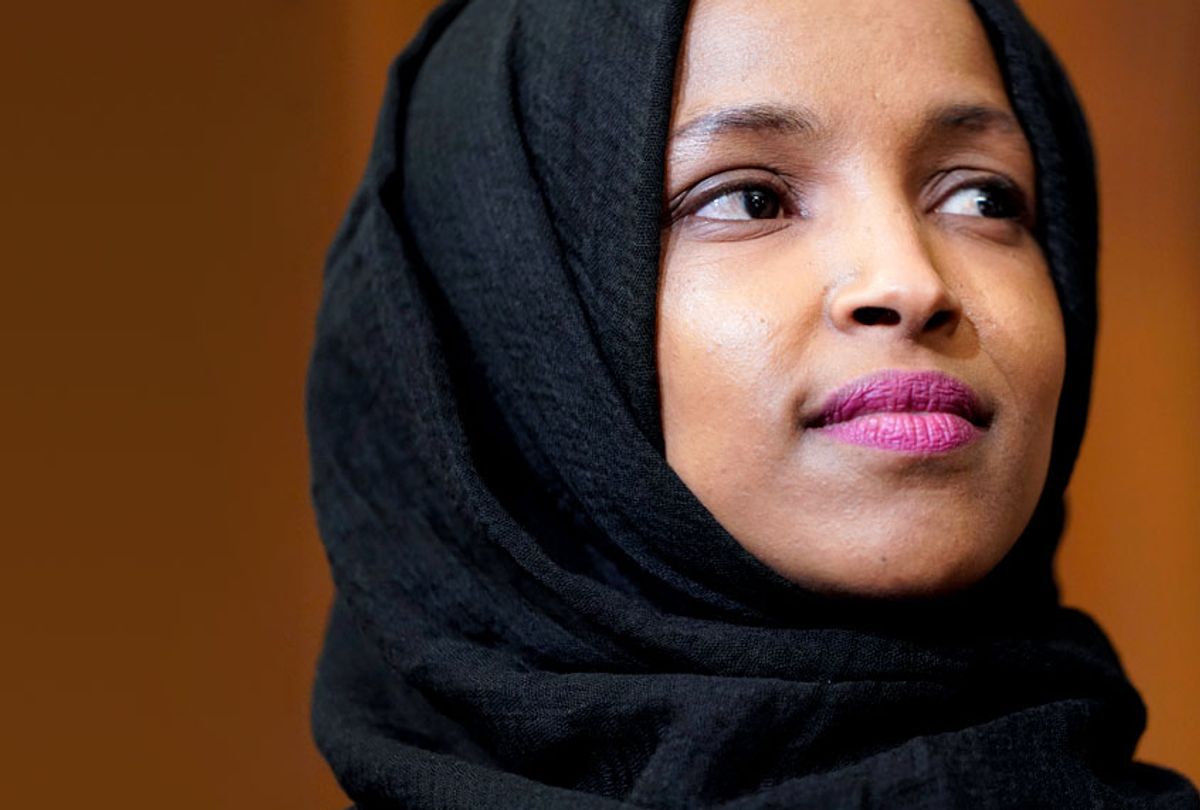 Rep. Ilhan Omar, D-Minn., will not be stripped from her seat on the House Foreign Affairs Committee over statements the freshman congresswoman made about Israel that prompted allegations of anti-Semitism by lawmakers on both sides of the aisles and pushes by Republicans for her removal.

"I don't know that that would do anything except exacerbate the situation even more," Committee Chairman Eliot Engel, D-N.Y., told CNN on Tuesday night, clarifying that the decision to strip the Minnesota Democrat of her spot on the committee would be up to House leadership – not him. "I'm looking to get rid of anti-Semitism – not looking to punish anybody."

Both Democrats and Republicans have criticized Omar, who this year became the first Somali-American and joined Rep. Rashida Tlaib, D-Mich., as the first Muslim women to serve in the Congress, for what they considered to be anti-Semitic remarks. The freshman congresswoman "unequivocally apologized" for Feb. 11 tweets critical of pro-Israel lobbying group AIPAC that critics alleged were offensive and anti-Semitic and swiftly spurred bipartisan condemnation.

Omar defended herself on Sunday after she came under fresh scrutiny for comments she made in a book store last week that pro-Israel advocates are pushing "allegiance to a foreign country."

In the wake of Omar's remarks, House Speaker Nancy Pelosi, D-Calif., and other top Democrats have been preparing a resolution to bring floor action against the Minnesota Democrat and to condemn anti-Semitism. The four-page measure, drafted by Pelosi, Engel, Majority Leader Steny Hoyer, D-Md., and Rep. Ted Deutch, D-Fla., details the history and recent rise of anti-Semitism in the U.S. and does not call out Omar by name. A vote on the measure, which was originally thought to take place Wednesday, will likely occur Thursday, The Hill reported.

The delay is a result of Democrats updating the resolution's language to emphasize a broader "anti-hate" message, House Majority Whip James Clyburn, D-S.C., said Tuesday on Fox News. Rep. Alexandria Ocasio-Cortez, D-N.Y., and other lawmakers criticized the initial draft, arguing that the amendment supported by Democrats does not condemn hateful or offensive speech directed at other minority groups.

Omar has been a vocal supporter of the rights of Palestinians and has voiced her opposition to Israeli policies — from West Bank settlements to the lobbying influence of AIPAC — since she began her tenure on Capitol Hill this January. In criticizing the pro-Israel lobby, however, Omar was slammed by her freshman colleagues, veteran leaders of her own party and Republicans who claimed her inartful tweets invoked anti-Semitic tropes.

Nearly a dozen pro-Israel groups sent a letter to Pelosi and Engel asking to remove Omar from her spot on the House Foreign Affairs Committee. Additionally, the Anti-Defamation League, a non-profit that tracks and exposes anti-Semitism, wrote a letter to Pelosi on Monday requesting a House resolution to reject what the organization called Omar's "latest slur."

In recent days, Omar has been on the receiving end of anti-Muslim attacks. On Friday, an Islamophobic poster linking Omar to the Sept. 11 terrorist attacks was displayed at an event sponsored by the West Virginia Republican Party. The poster included a photo of the burning World Trade Center and a photo of the Muslim congresswoman below it.

Omar, meanwhile, has received support from prominent progressive lawmakers, including Ocasio-Cortez and Tlaib, who is the first Palestinian-American woman elected to Congress. Omar has spoken out against her Democratic colleagues, who have failed to come to her defense even as she faced mounting criticism.

"I am told everyday that I am anti-American if I am not pro-Israel. I find that to be problematic and I am not alone. I just happen to be willing to speak up on it and open myself to attacks," Omar tweeted Sunday.