Mulvaney was a member of the Tea Party and House of Freedom Caucus, and is now using Trump to build his empire 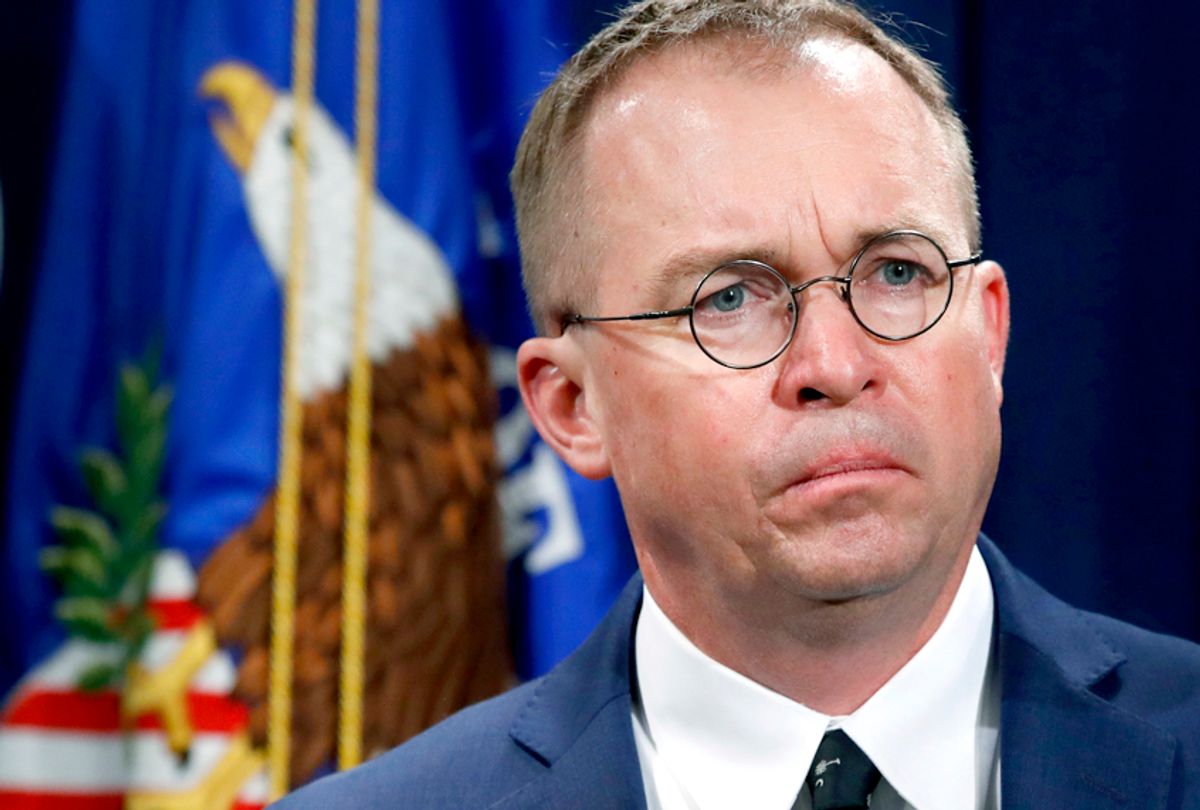 When Mick Mulvaney was representing South Carolina during his years in the U.S. House of Representatives, the far-right Republican had no interest in moderation: he was a member of the Tea Party and the House Freedom Caucus, and he was happy to talk to the John Birch Society. Mulvaney has since gone on to serve in the Trump administration, most recently as acting White House chief of staff — and an in-depth report by Seung Min Kim, Lisa Rein, Josh Dawsey and Erica Werner for the Washington Post delves into the ways in which Mulvaney, now 51, has favored a take-no-prisoners approach when it comes to pushing President Donald Trump’s agenda and doing everything he can to erase former President Barack Obama’s achievements.

For the report, the Post interviewed more than 30 people, including White House aides and former and current Trump Administration officials. And the Post journalists explain that Mulvaney has “made enemies on both sides of the aisle”: while “Democrats openly disdain” Mulvaney “as a saboteur,” some GOP Republican senators “freely signal they would rather deal with any other administration official than him.”

Mulvaney, according to the report, “has helped install more than a dozen ideologically aligned advisers in the West Wing” — and members of Trump’s cabinet “are pressed weekly on what regulations they can strip from the books and have been told their performance will be judged on how many they remove.” One of the White House officials interviewed told the Post that Mulvaney has been “building an empire for the right wing.”

The Post reports that because Mulvaney doesn’t consider foreign policy his strong point, he has “installed” Rob Blair as a national security deputy — and Blair “regularly battles with” National Security Adviser John Bolton. According to the Post, Bolton and Mulvaney “are barely on speaking terms.”

Immigration and health care, the Post reports, are two of Mulvaney’s top issues, and Mulvaney isn’t shy about putting enormous pressure on members of Trump’s cabinet where those issues are concerned. And while Reince Priebus and John Kelly (both of whom previously served as White House chief of staff in the Trump Administration) were, according to the Post, “more deferential to cabinet members,” Mulvaney has told them they are “being judged on how much they can deregulate, with the policy council monitoring them daily.”

Mulvaney was first elected to the U.S. House of Representatives as part of the 2010 red wave of 2010 (prior to that, he served in South Carolina’s state legislature). And he was reelected in 2012, 2014 and 2016. But despite being elected to four terms in the House, Mulvaney made his share of enemies in Congress — including fellow Republicans.

The Post reports that in 2019, “GOP aides routinely trash Mulvaney in private and say he has done little to improve his image from his House days, when he was a leading antagonist in forcing government shutdowns and other hardball tactics.” And Senate Majority Leader Mitch McConnell, according to the Post, “has told others on Capitol Hill that he would prefer to deal with Treasury Secretary Steven Mnuchin.”

The Post concludes its report by stressing that Mulvaney has a strong rapport with Trump, quoting Republican Jonathan Slemrod (formerly of the Office of Management and Budget) as saying that the acting White House chief of staff “thinks Trump is a political genius and doesn’t second-guess a lot of his decisions.” And Mulvaney is quoted as saying he plans to remain in Trump’s administration “as long as I feel like he values my opinion and I like working for him — and both those things are happening right now.”