“He gives us nothing outside of racist tweets,” Spencer said as he complained about President Trump on CNN 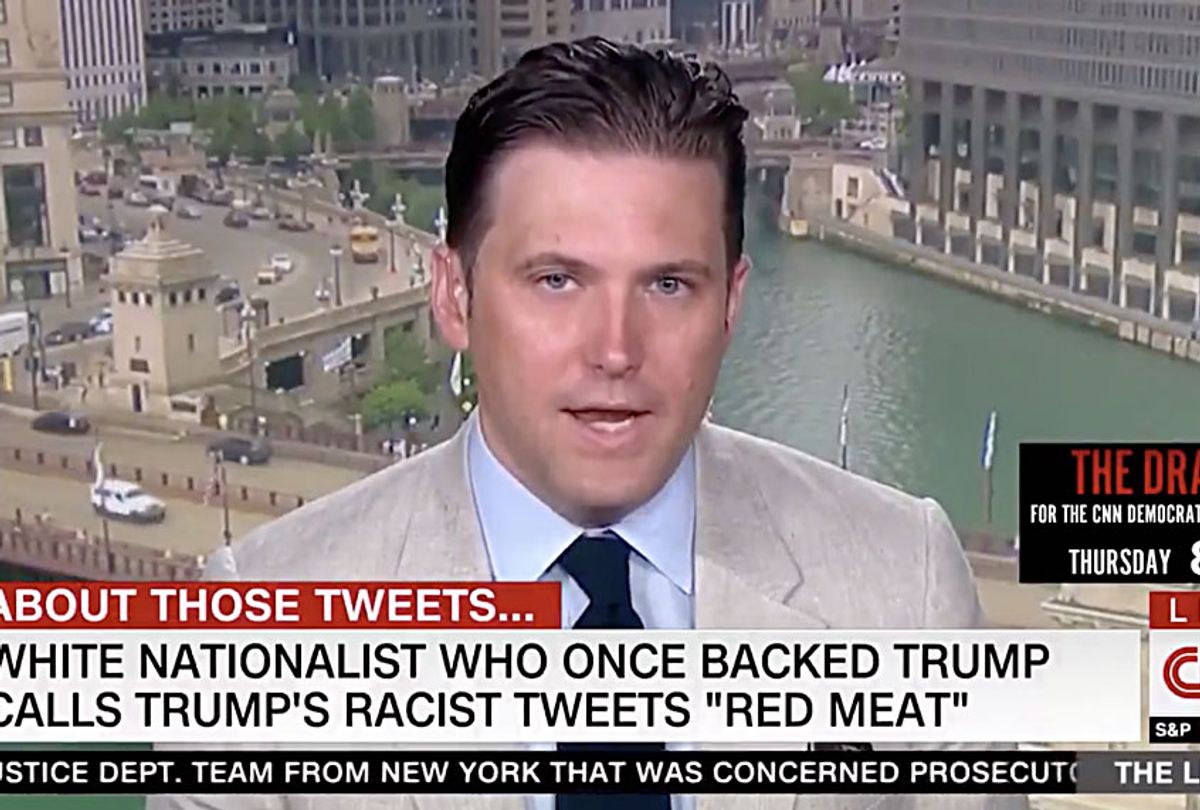 White supremacist Richard Spencer appeared on CNN on Tuesday to discuss President Donald Trump's racist tweets, prompting widespread criticism that the network had given a platform to a “horrendous racist.”

"Many white nationalists will eat up this red meat that Donald Trump is throwing out there. I am not one of them,” Spencer told CNN. “I recognize the con game that is going on.”

He later added, "He gives us nothing outside of racist tweets. And by racist tweets, I mean tweets that are meaningless and cheap and express the kind of sentiments you might hear from your drunk uncle while he's watching [Sean] Hannity."

Many took to Twitter, where Spencer’s appearance became a trending topic, to rebuke CNN's controversial decision.

"Between Richard Spencer and this, not CNN’s best day," wrote Charles P. Pierce of the Politics Blog.

Eddie Zipperer of the Daily Caller tweeted, "Meanwhile, @CNN was allowing Richard Spencer to dress up in his pundit outfit and use their airwaves to share his crappy opinions. Pretty ironic that on a day they're fully devoting to calling Trump racist, they themselves give a platform to a horrendous racist."

He later added, "Honestly, the fact that CNN chose to air his opinions is a million times more newsworthy than what Richard Spencer thinks about any subject ever."

The underlying issue being addressed by Spencer was a series of racist tweets posted by President Donald Trump on Sunday attacking four progressive Democratic congresswomen of color known as “the squad,” which includes Reps. Alexandria Ocasio-Cortez of New York, Ilhan Omar of Minnesota, Rashida Tlaib of Michigan and Ayanna Pressley of Massachusetts. In a series of tweets, the president said the freshmen legislators should "go back" to their supposed countries of origin, even though all four are American citizens and only one — Omar — was born outside of the U.S.

"So sad to see the Democrats sticking up for people who speak so badly of our Country and who, in addition, hate Israel with a true and unbridled passion. Whenever confronted, they call their adversaries, including Nancy Pelosi, 'RACIST.' Their disgusting language and the many terrible things they say about the United States must not be allowed to go unchallenged. If the Democrat Party wants to continue to condone such disgraceful behavior, then we look even more forward to seeing you at the ballot box in 2020!" Trump wrote in his controversial tweets.

Trump later doubled down on his tweets, rhetorically asking on Monday morning, "When will the Radical Left Congresswomen apologize to our Country, the people of Israel and even to the Office of the President, for the foul language they have used, and the terrible things they have said. So many people are angry at them & their horrible & disgusting actions!"

Spencer is perhaps most notorious for being a key figure in the 2017 Unite the Right rally in Charlottesville. According to the Daily Beast, Spencer is currently being sued over the event, which he claims was organized with nonviolent motives even though the agenda of white nationalists is inherently violent. In August of that year, Spencer and other white supremacists stormed the Virginia city. A torch-lit march poured into a large rally organized by the alt-right the proceeding day, which resulted in the death of a counter protester, Heather Hayer.