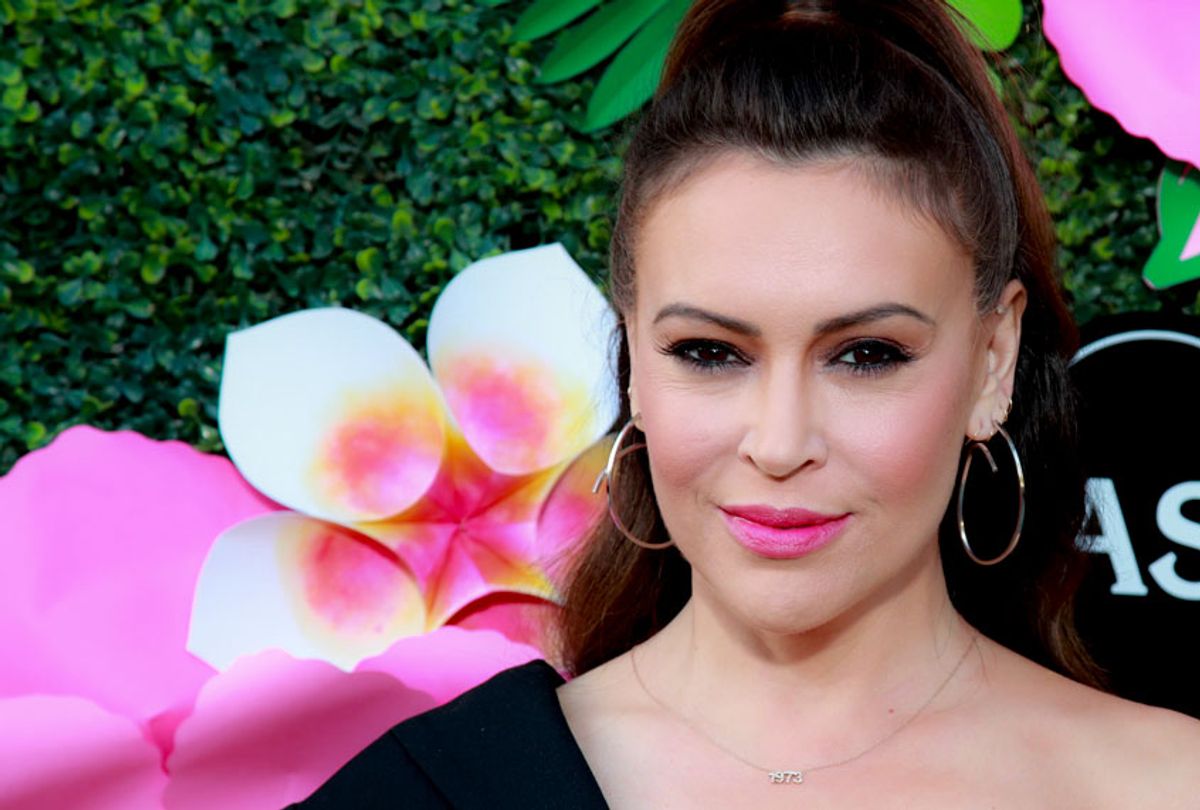 Last night, actress-turned-activist Alyssa Milano announced that she would be attending a campaign fundraiser for Democratic presidential candidate Marianne Williamson, who will also be appearing on Milano’s podcast “Sorry Not Sorry.”

Williamson, a self-help author, was something of a breakout character during the first round of NBC’s Democratic debates — but not necessarily in a positive way. Her responses were unpredictable, ranging from the off-topic (she referenced John F. Kennedy sending people to the moon while the other candidates discussed climate change) to the screwball. By the next morning, many viewers had determined that while Williamson was not a viable presidential candidate, she would excel as “Secretary of Crystals.”

Milano obviously anticipated some pushback in response to her financial support of Williamson.

The actress tweeted: “I know. I know. But she’s the only candidate talking about the collective, soulful ache of the nation & I think that’s an important discussion to have. And as I’ve said before, I’m not committing to anyone yet. I’m going to support everyone if given the opportunity until the choice is crystal clear.”

The “I know, I know” that kicks off her statement recalls discussions with friends who are announcing they’re giving bad exes another chances (“I know, I know. He’s got some issues, but you don’t know him like I do”). We’ve all used that phrase. It’s an indicator of attempting to justify problematic choices.

To be clear, Williamson is one of those choices.

Her kookiness isn’t benign. Williamson’s version of the “power of positive thinking” often presents as anti-science rhetoric. She’s waffled on the necessity of vaccines, at one point calling vaccine mandates “draconian” & “Orwellian.”

In a piece for The Daily Beast, Jay Michaelson points to a period in the '90s when Williamson would tell HIV-positive fans that “the AIDS virus is not more powerful than God.” If they could visualize themselves getting well, according to her, they could heal themselves.

“The results were predictable,” Michaelson wrote. “Some people went off their medication, since taking medicine showed you didn’t really believe that you could cure yourself, and if you lack perfect faith, it’s not going to work. Some even died.”

In that context, Williamson’s more recent musings on Twitter — statements like “God is BIG, swine flu SMALL.  See every cell of your body filled with divine light. Pour God's love on our immune systems. Truth protects,” and “The power of your mind is greater than the power of nuclear radiation. Visualize angels dispersing it into nothingness.” — are all the more unsettling.

Much of the public pushback Milano received about her support of Williamson centered on this element of the candidate’s background.

“Please do not use your platform to support people who do not support science and public health,” former CNN host Soledad O'Brien responded via Twitter.

So yes, to recap, a "Charmed" star is now speaking out in support of Oprah’s spiritual advisor, a move so predictably Hollywood it wouldn't normally raise eyebrows. But after Milano became one of the faces of #MeToo in 2017 — a decade after Tarana Burke launched the sexual assault and abuse advocacy movement — when she posted a tweet calling for anyone who had been sexually abused to post "me too" in response, the former child star's public identity has been increasingly positioned as that of progressive political activist, both on Twitter and with her recently launched podcast tackling "social, cultural and political issues through unapologetic conversations" called "Sorry Not Sorry." Milano isn't the first actor to make activism part of her celebrity brand, but progressive political causes are the bread and butter of her main Twitter presence, which boasts 3.6 million followers, while career updates like promoting her latest Lifetime movie are relegated to a secondary account.

The backlash to her Williamson support isn't the first time Milano's activism has received pushback, either. In May, she called for a sex strike in response to abortion bans being proposed or passed in several states — Georgia, Alabama, Texas, Ohio, Kentucky.

“Until women have legal control over our own bodies we just cannot risk pregnancy. JOIN ME by not having sex until we get bodily autonomy back,” Milano tweeted. “I’m calling for a #SexStrike. Pass it on.”

Unsurprisingly, many women did not see Milano’s call as a legitimate pathway towards comprehensive reproductive rights, not to mention the hypocrisy of her #sexstrike — advocating bodily autonomy by telling women what to do with their bodies.

As Chicago Tribune columnist Heidi Stevens pointed out, her call also had the unintended consequence of providing abstinence-only advocates with fodder. (“Yes!!! You know how many problems we would solve with abstinence before marriage? Unwanted pregnancy, STDs, among others.”)

Milano played an arguably valuable role in publicizing #MeToo, but in her desire to start another social movement — complete with a hashtag that is picking up steam on Twitter again today, because the internet doesn't forget — Milano’s call for a #sexstrike made light of, and potentially undermined, the legitimate work being done by reproductive rights and justice activists.

Celebrity activism can feel a little self-serving; it’s not unlike when corporations produce politics-lite merchandise in an effort to profit from a cultural movement. If Milano legitimately wants to champion progressive causes and women’s rights, she should consider backing a candidate who has a true chance of instituting political change. Otherwise she risks being little more than the human equivalent of a “Fight With Girl Power” t-shirt — or worse, doing active harm.