Ilhan Omar condemns racist chant at Trump rally: "I believe he is a fascist"

"I wasn't happy with that message," President Trump told reporters the day after the racist chant broke out 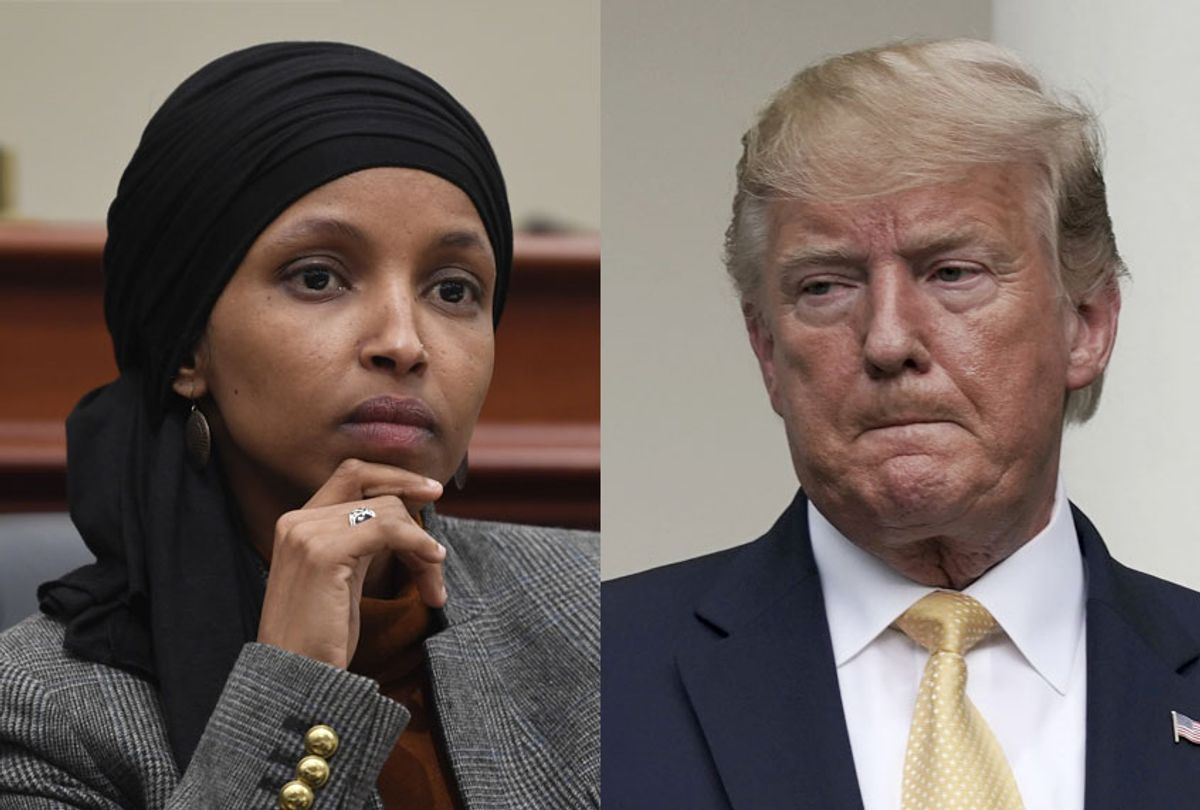 During an impromptu press conference in the middle of Independence Avenue, Rep. Ilhan Omar, D-Minn., denounced President Donald Trump as a "fascist" and "racist" for saying she should go back to the country where she was born — Somalia.

"We have said this president is a racist," Omar told reporters. "We have condemned his racist remarks. I believe he is a fascist . . . I want to remind people that this is what this president and his supporters have taught our country: that is supposed to be a country where we allow democratic debate and dissent to take place. And so this is not about me — this is about us fighting for what this country truly should be."

According to a second video clip of the exchange, Omar also criticized Sen. Lindsey Graham, R-S.C., for defending the president.

"Today, even Lindsey Graham defended his comment by saying that if I was wearing a MAGA hat — if there was a Somali person wearing a MAGA hat, they would not be deported," Omar told the reporters before segueing into her views on how Trump has discouraged "democratic debate and dissent" in America.

Omar is also reported by the Hill to have said, "I am not [scared for my safety.] What I'm scared for is the safety for people who share my identity."

While Trump continues to stand by the racist tweets that first started the controversy, he attempted to distance himself from the chant of "send her back" that broke out at his political rally in North Carolina on Wednesday.

"I disagree with it. I wasn't happy with that message," Trump told reporters in the Oval Office on Thursday.

When asked why he did not stop them, he said, "I think I did – I started speaking very quickly." In fact Trump, simply continued his speech without telling his supporters to stop the first time the chant broke out but then paused to let the chant continue on another occasion.

While Trump claims to be dissatisfied with the chants to send Omar back to Somalia, he expressed a similar thought in his Sunday tweets, which said that it was "so interesting to see 'Progressive' Democrat Congresswomen, who originally came from countries whose governments are a complete and total catastrophe, the worst, most corrupt and inept anywhere in the world (if they even have a functioning government at all), now loudly and viciously telling the people of the United States, the greatest and most powerful Nation on earth, how our government is to be run. Why don’t they go back and help fix the totally broken and crime infested places from which they came. Then come back and show us how it is done. These places need your help badly, you can’t leave fast enough. I’m sure that Nancy Pelosi would be very happy to quickly work out free travel arrangements!"

Trump later doubled down on those tweets, insisting that Omar and "the squad' consisting of Reps. Alexandria Ocasio-Cortez of New York, Ayanna Pressley of Massachusetts and Rashida Tlaib of Michigan all hate America and Israel.