Paralyzed by the God Emperor: As Democrats dither and bicker, the media gets punk'd again

Have we learned nothing? Maybe not: If the media and the Democrats get any more defensive, they may disappear 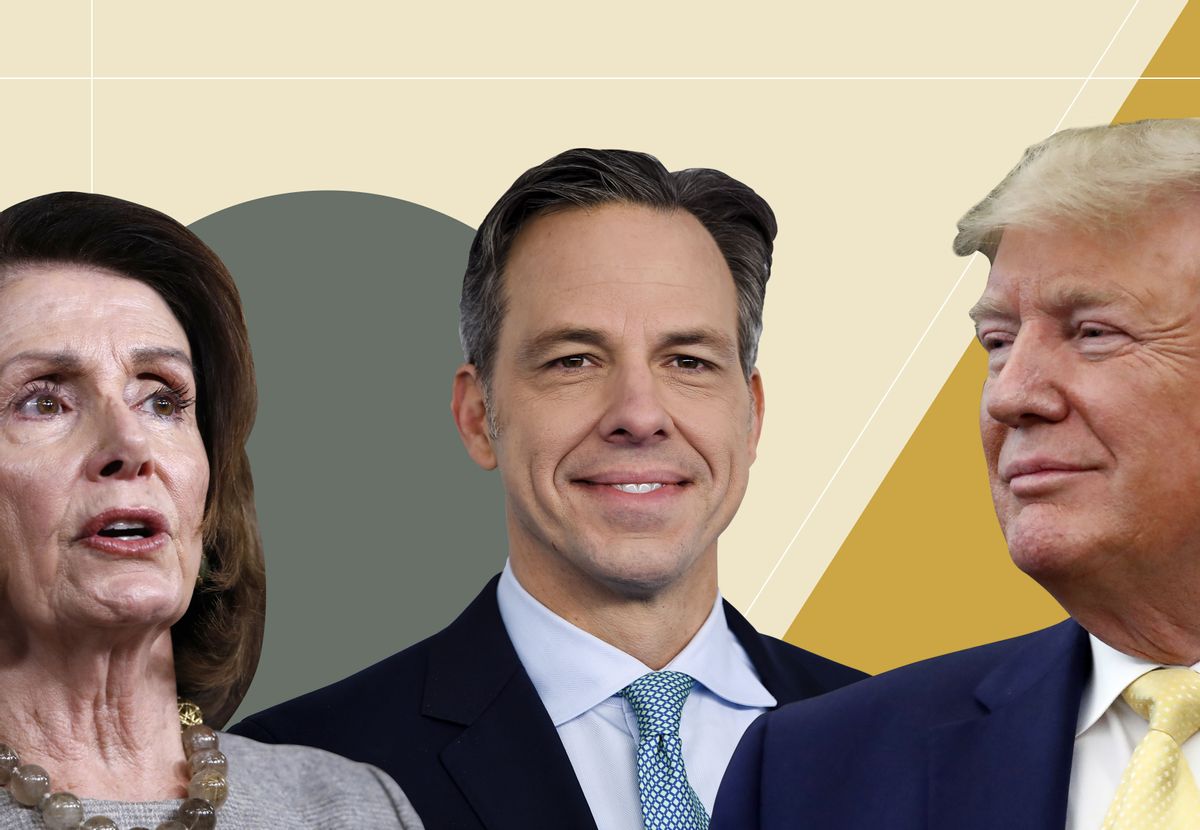 Over the past few days — which have felt like a runaway elevator ride into hell — there has been a lot of pointless debate about whether Donald Trump’s vicious, false and hateful attacks on Rep. Ilhan Omar of Minnesota and the other progressive congresswomen known as “the Squad” will help him or hurt him. I don’t know the answer, but we have to ask ourselves, first of all, what the question means.

We are clearly not asking whether this tactic will improve Trump’s capacity for governing effectively, or his position for posterity, or his role in the histories of this period that will presumably be written somewhere, by someone. Those ships have sailed, so long ago they can no longer be seen over the horizon. We are presumably asking whether or not he improves his chances of parlaying another electoral minority into another Electoral College majority, by exploiting the built-in weakness of our anachronistic political machinery and the directionless bitterness of a few million white people in a handful of “heartland” states.

To frame the question that way, I believe, is clarifying. We are no longer talking about saving democracy or about appealing to the better angels of anybody’s nature. We are talking about small and evil things, and our vision is limited to the least-bad choices in an all-bad situation. We are like the prisoners in a dungeon conjured by Dickens or Alexandre Dumas, trying to keep our spirits up by placing bets on cockroach races.

As Adam Serwer of the Atlantic and others have observed, asking these kinds of questions about Trump’s recent conduct — or his conduct throughout his career in public life — acknowledges that overtly racist rhetoric and policies appeal to Trump’s base of support and may also appeal to wavering “swing voters,” who perhaps voted for him in 2016 despite some misgivings and can potentially be persuaded to abandon him. After that, it is entirely logical to conclude that one viable strategy for the Democrats, in their quest to defeat Trump by peeling off a few of his voters among the fabled white working class of the Rust Belt, is to be a little more pro-racist or racist-adjacent or racist-curious.

One can of course present that dynamic in less inflammatory terms, so that it’s about some undifferentiated mass called the “public” which is “anxious” about “socialism” or “open borders” or excessive “wokeness” or whatever, and requires assurances from the Democrats that if they regain full power in Washington they won’t actually use it to do anything, and will be just as indecisive and ineffective as ever. I’m not necessarily arguing that analysis is incorrect, in the short-term, instrumental sense. I don’t know that. I’m saying it is somewhere between disheartening and terrifying.

Donald Trump is not actually a Machiavellian political mastermind, whatever his supporters and many of his supposed enemies may believe. But he has a salesman’s cunning for identifying the weak spots and vulnerabilities of his marks, and is an expert bullshitter and gaslighter. That leaves his opponents confused and cautious amid his blitzkrieg of lies, as well as understandably fearful that whatever path they choose will end by leading them straight into Trump’s chasm. But every fear hides a wish, as a character in David Mamet’s play “Edmond” puts it, and the Democratic Party’s fears of division and self-destruction have a noteworthy tendency to become reality.

Trump targeted those four charismatic women of color in Congress, of course, precisely because they had become a flashpoint of division and dissension among Democrats. As a lengthy report published this weekend in the Washington Post puts it, Trump told his advisers “he thought he was interjecting himself into Democratic Party politics in a good way.”

As for the substance of the perceived dispute between House Speaker Nancy Pelosi, Rep. Alexandria Ocasio-Cortez and their respective allies, that didn’t matter to Trump and he almost certainly didn’t understand it. As I wrote here last week, he perceived an opening to come sailing in and dunk on a group of powerful, strong and articulate women who have been presented to his supporters as cartoon villains — and that is certainly how the red-hatted hordes perceived his words and actions.

Asking whether the so-called public agreed with the so-called substance of Trump's racist tweets, vile incitements and outrageous lies, or found his conduct offensive, is missing the point on a grand scale. Of course his conduct was offensive. Of course the things he said were hateful and untrue. That was the point. To be more specific, the point was to thrill his fans with a theatrical display of almost-fascism that owns the libs (and horrifies the NeverTrumper “cuckservatives”) and that may or may not be meant seriously. Whatever “seriously” means with that guy. LOL who knows? Keep ‘em guessin’, God Emperor!

What we have now, after almost three years of continuous reality slippage in TrumpWorld, is pretty much the same predicament we started with, which is astonishing in itself. Despite endless and tiresome self-examination, the mainstream media keeps plodding along behind Trump, repeatedly falling for his stupid tricks, spinning condescending fantasies about his supporters and longing for the restoration of some imaginary time of normalcy, like the hapless dad in a 1980s sitcom.

Meanwhile, the Democratic Party — constitutionally uncertain about what it stands for or whom it represents — descends into internal bickering over how best to resist Trump or defeat him. It has landed for now on what Democratic leaders appear to view as the least risky strategy: Doing as little as possible while running out the clock on the presidential election, in order to protect their newfound House majority (with which they will continue to do as little as possible in the future).

After the infamous “Send her back” chants directed at Omar during Trump’s rally last week in North Carolina, most major newspapers and news sites dutifully reported that his advisers and family members — especially the ever-benevolent yet somehow powerless Ivanka Trump — were displeased with this unprecedented outbreak of rudeness and cajoled the president into a half-hearted and blatantly insincere disavowal. Everyone understood throughout this vapid exercise in virtue-signaling, of course, that Trump would walk back the walk-back almost immediately, delighting the faithful and pantsing the “fake news” industry one more time.

In seeking to decode the Democratic infighting, it’s almost impossible to tell where the legitimate dispute between progressives and moderates ends and where the media’s lust for a “Democrats in disarray” narrative — and a juicy “catfight” between prominent women — begins. No one forced Pelosi and Ocasio-Cortez to launch broadsides at each other in dueling interviews with the New York Times and Washington Post, respectively, or forced their allies and surrogates (on both sides, if you’ll pardon the phrase) to raise the temperature with a bunch of inflammatory tweets.

It’s clear enough that Pelosi was irritated by the Squad members’ refusal to vote for the controversial border-security bill that she herself was eager to see recede in the rear-view mirror. It’s also clear, as I wrote last week, that urban machine Democrats — including, in particular, several of Ocasio-Cortez’s neighbors in the New York congressional delegation — perceive her and the Justice Democrats (the reform group co-founded by her chief of staff) as an existential threat to their entire system of power.

No one has behaved impeccably in this squabble, but progressives have correctly observed that Pelosi holds the gavel and nearly all the power, and has decided to punish and marginalize a small group of leftists — who supported her in the speakership battle — far more vigorously than she has ever gone after the larger group of “Blue Dogs” or “Problem Solvers” who openly opposed her. Furthermore, Pelosi has the enthusiastic or perhaps panicked backing of numerous commentators, reporters and editors in the mainstream media, who appear to have ingested the unproven notion that vigorous internal debate over policies and priorities will damage the Democrats’ prospects in 2020. (Political history offers little or no support for this premise. If you have your hand up to say “1968,” a year of nearly apocalyptic chaos, I think that only underscores the weakness of the argument.)

New York Times columnist Thomas L. Friedman, having consigned his bromance with Saudi Arabia’s killer crown prince to the memory hole, went massively viral with his fear-mongering plea that Democrats should please pick a 2020 nominee he might feel OK about — rather than, one supposes, some scary socialist who might ask uncomfortable questions about the nature of economic power or the doctrine of endless secret war. In a subsequent comments thread, Friedman described the 2020 Democratic field as "so many candidates offering so many free things to so many people — some of them not even American citizens."

That followed what felt like an onslaught of opinion pieces by NeverTrump ex-Republicans urging Democrats to choose the path of caution and moderation, and preceded a Times news article depicting a private Nantucket gathering of Democratic governors as consumed with worry over too much "economic justice" and Squad-style SJW wokeness. (Although not so tormented that they didn’t finish off the seafood brunch.)

CNN anchor Jake Tapper tweeted out a bunch of attacks on AOC and the Squad members from unnamed House Democrats, ranging from the allegation that their dissent is only helping Trump to the Trumpian slur that Omar and Rep. Rashida Tlaib of Michigan are anti-Semites. (No Sherlock Holmes abilities are required to deduce that Rep. Josh Gottheimer of New Jersey was among Tapper’s sources, and conceivably engineered the whole attack.) As Alex Pareene of the New Republic eventually determined, Tapper had apparently not bothered to reach out to Omar or Tlaib’s offices for comment before publishing the blind items. (Both Pareene and Tapper formerly worked at Salon, for the record, although they did not overlap.)

What all this adds up to, in fact, is a coordinated top-down Democratic strategy: Avoid the polarizing prospect of impeachment at all costs, slow-walk investigations of Trump and his administration until they disappear under the presidential campaign, and allow Joe Biden (or, conceivably, Sen. Kamala Harris) to run on a platform of restoring Obama-era normalcy. Plenty of sensible and intelligent people have concluded that this is the best bet for defeating Trump, holding the House and just maybe squeezing out a majority in the Senate.

They could be right about that. I do not claim any certain knowledge to the contrary. But the larger question is whether such a near-term victory would prove Pyrrhic, by utterly avoiding the deeper social, political and cultural conditions that produced Trump in the first place. Biden, for instance, is clearly basing his campaign on the premise that there are no deeper systemic flaws that led to Trump. There is no crisis of democratic legitimacy and no profound, bitter class divisions — and the examples visible across the Western world mean nothing, because America is special and different. Our reality-show president is just a fluke, a piece of malicious malware injected into our collective hard drive by outsiders. Once he is purged, no traces of that dangerous code will be left behind.

At least for now, that big question is unanswerable. The same is true of the questions about the cautious, defensive, reactive postures of both the Democratic hierarchy and the mainstream media: Do they believe that more forceful and direct positions will worsen political divisions and serve to strengthen Trump, by scaring away the mythical Obama-to-Trump voters of Waukesha County and similar exotic climes? Or are they just protecting their own narrowing provinces of power? Or are we, perhaps, trapped in a feedback loop of perishing democracy and diminishing expectations, where it’s impossible to tell the difference? My cockroach will win, I tell you! Yours sucks.