Greta Thunberg started #ClimateStrike. Charles Shay fought on Omaha Beach. They'd like us to save the world 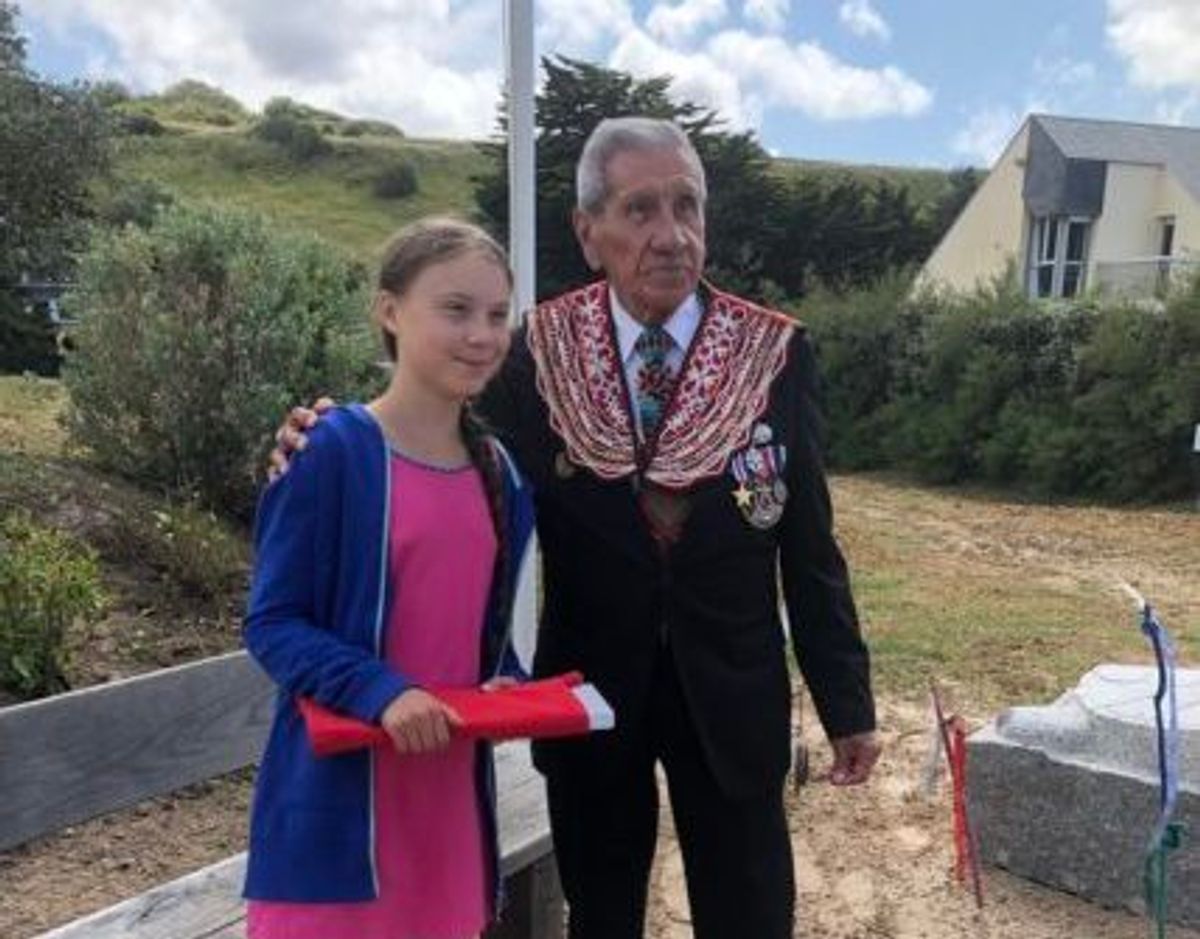 Climate activist Greta Thunberg on Sunday urged people to recognize "the link between climate and ecological emergency and mass migration, famine, and war" as she was given the first Freedom Prize from France's Normandy region for her ongoing school strikes for climate and role in catalyzing the "Fridays for Future" climate movement.

The 16-year-old from Sweden received the award before a crowd of roughly 2,000 people in the city of Caen. She shared the stage with D-Day veterans and prize sponsors Léon Gautier of France, who is 96, and Charles Norman Shay of the United States, who is 95.

"I think the least we can do to honor them," said Thunberg, "is to stop destroying that same world that Charles, Léon, and their friends and colleagues fought so hard to save."

Thunberg spent the day before the award ceremony with Shay:

On Twitter, Thunberg also highlighted some of Shay's remarks during Sunday's ceremony, calling them "the most powerful words on the climate and ecological emergency I've ever heard."

"All these many damages on Mother Nature make me sad," said Shay. "As a soldier I fought for freedom to liberate Europe [and the] world [from] Nazism 75 yeas ago, but this is no sense if Mother Nature is deeply wounded, and if our civilization collapses due to inappropriate human behaviors."

Agence France-Presse reported on Thunberg's remarks at the ceremony:

"This is a silent war going on. We are currently on track for a world that could displace billions of people from their homes, taking away even the most basic living conditions from countless people, making areas of the world uninhabitable from some part of the year.

"The fact that this will create huge conflicts and unspoken suffering is far from secret."

"And yet the link between climate and ecological emergency and mass migration, famine, and war is still not clear to many people. This must change."

The Freedom Prize website offers this background of the new award:

Focused on the meaning and values of the Allied landings, the Freedom Prize gives young people all over the world the opportunity to choose an exemplary person or organization, committed to the fight for freedom. Just like those who risked their lives when they landed on the Normandy beaches on 6 June 1944.

On 6 June 1944, it was in the name of the ideal of freedom that 130,000 soldiers, including a significant number of young volunteers, risked their lives and that several thousand died on these unfamiliar beaches. 17 nations were involved in Operation Overlord to open up “Liberty Road” on which nearly 3 million soldiers traveled in their bid to save the world from the barbarity of the Nazis. The Allied landings remind us that freedom is a universal demand.

Today, many situations around the world testify to its fragility. The Freedom Prize pays homage to all those who fought and continue to fight for this ideal.

Thunberg, responding to a recent question from a reader of the Observer, a British newspaper, made clear that her commitment to the fight for urgent climate action is unwavering.

"We must never give up," she said. "I have made up my mind and decided to never, ever give up."