"I can say this from a personal perspective as a soldier," the Iraq War veteran says of Harris 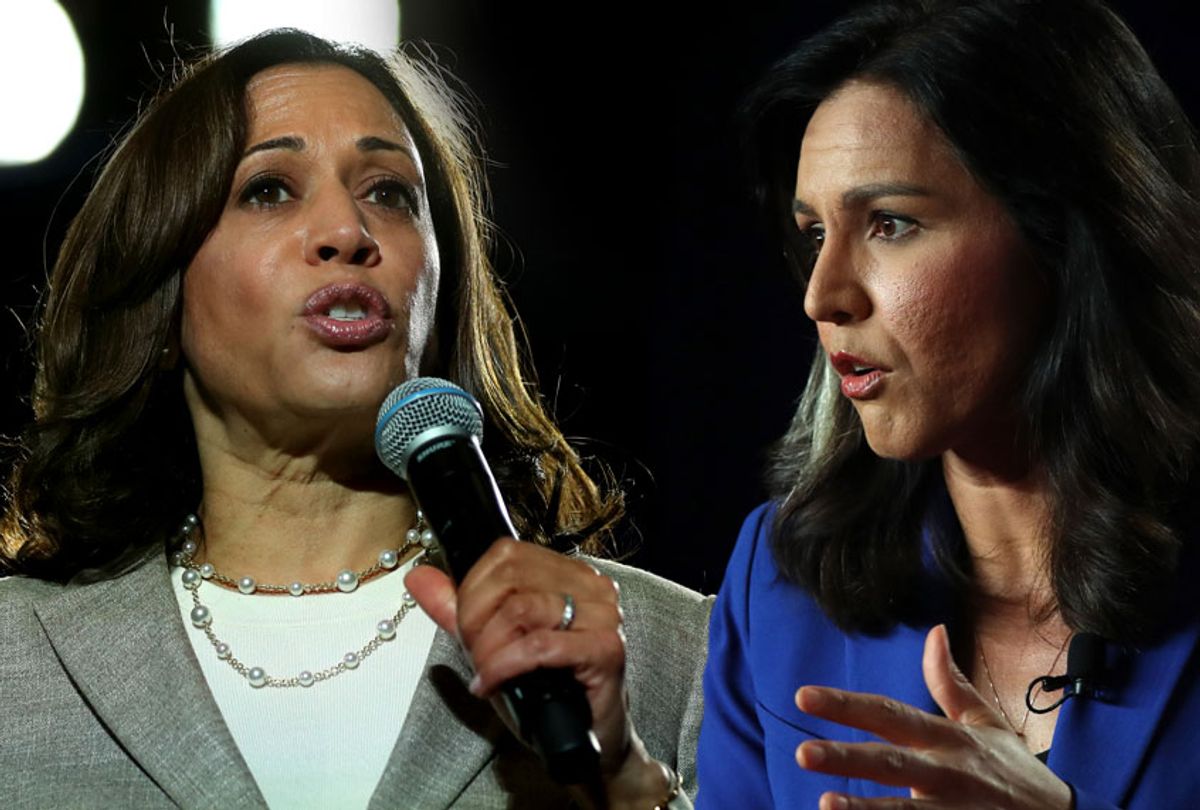 Rep. Tulsi Gabbard of Hawaii claims Sen. Kamala Harris of California, one of her rivals for the 2020 Democratic presidential nomination, "is not qualified to serve" as commander-in-chief.

"Kamala Harris is not qualified to serve as commander-in-chief, and I can say this from a personal perspective as a soldier. She has no background or experience in foreign policy, and she lacks the temperament that is necessary for commander-in-chief," Gabbard said Tuesday during an interview with Fox Sports Radio.

"I have seen the cost of war first hand and experienced the consequences of what happens when we have presidents from both political parties in the White House who lack experience and lack that foreign policy understanding, who therefore fall under the influence of the foreign policy establishments and military industrial complex," the Hawaii representative continued. "This is what is so dangerous and what we’ve seen over time."

This is not the first time Gabbard has targeted Harris. Earlier this month, she criticized the California senator for her viral exchange with former Vice President Joe Biden in the first Democratic presidential debate.

"Really, what she's saying is her position is the same one she was criticizing Joe Biden for. So this is just a political ploy, and I think a very underhanded one just to try to get herself attention — to move herself up in the polls," Gabbard told CBS News. "I think that we need to be above that — all of us."

When asked by CBS News if she thought there was too much focus on racial issues, Gabbard said, "I think there are still racial injustices and inequalities that exist in this country that we need to address. I think it's important for us to look forward toward the future to see how we can come together as a country — how we can break down these injustices and inequalities and come together and work toward a brighter future. Every single candidate will need to stand up, and speak out and defend their own record."

Gabbard has also tweeted that Harris' criticism of Biden was inappropriate, writing that "I agree with [former presidential adviser David] Axelrod. But let's get real. It wasn't a 'whole thing' — it was a false accusation that Joe Biden is a racist."

Ian Sams, a spokesman for the Harris campaign, told The Hill at the time that the California senator "literally said in the debate, 'I do not believe you are a racist.'"

Harris has seen a major bump in polls since the first Democratic presidential debate, emerging as a frontrunner alongside Biden and Sens. Bernie Sanders of Vermont and Elizabeth Warren of Massachusetts. Gabbard, meanwhile, has not broken through. She has faced criticism for her history of vitriolic and hateful views toward members of the LGBTQ community and her seemingly sympathetic views to Syrian dictator Bashar al-Assad.