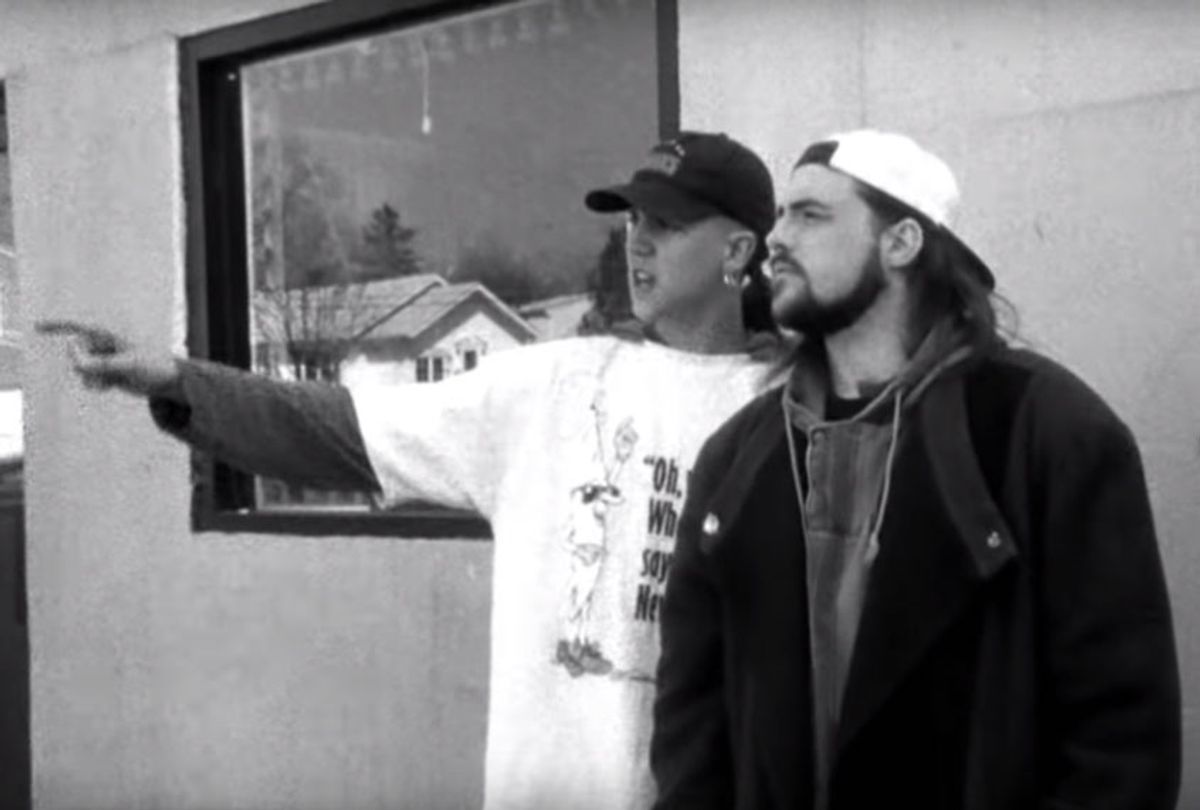 There is one scene in "Clerks" that epitomizes the best elements of that movie — or, for that matter, any Kevin Smith movie, including (hopefully) the upcoming "Jay & Silent Bob Reboot."

Jaded convenience store clerk Dante Hicks (Brian O'Halloran) and his best friend Randall Graves (Jeff Anderson), an extremely cynical clerk at the adjacent video rental store, are killing time during a slow work day by talking about "The Empire Strikes Back" and "Return of the Jedi." First Dante explains that "Empire" is a better "Star Wars" sequel because of its dark ending — hero Luke Skywalker getting his hand cut off, learning that villain Darth Vader is his father and seeing his best friend Han Solo get captured by bounty hunter Boba Fett — and concludes with the observation that "that's what life is, a series of down endings." Randall counters by pointing out that "Return" also had a pretty dark ending, albeit one that the filmmakers likely never intended: Because the climax included a massive imperial space station, the Death Star, being blown up by the rebel forces while it was still under construction, the chances are countless independent contractors were killed in the process.

"You didn't ask for that. You have no personal politics. You're just trying to scrape out a living," Randall complains. At that moment a customer interjects, explaining that he is a roofer and turned down a "simple re-shingling job" that would have been very profitable because the property was owned by a notorious mobster. He instead referred the gig to a friend, who accepted — and was killed on the clock as an innocent casualty when his criminal employer was murdered.

Here, in less than 200 seconds, are the various ingredients that make up the lives of countless nerds in modern America: The low wage and demeaning menial labor gigs. The existential despair ("Life is a series of downer endings"). The unending need to balance possible opportunities for self-improvement with the fear of how a cruel outside world might punish you for doing so ("You're just trying to scrape out a living.") And all of that wrapped up in an obsession with pop culture, one where seemingly frivolous conversations about the minutiae of beloved franchises are as much about the lives and souls of the nerds themselves as about the fantasy worlds to which they mentally flee to escape the drudgery of their day-to-day routines.

There are countless moments like this in "Clerks," which Smith wrote and directed when he was an obscure New Jersey indie filmmaker. After it became a hit in 1994, Smith launched what eventually became known as the View Askewniverse, a collection of offbeat comedies made by a nerd and for other nerds — or, as the underrated "Clerks" animated series might put it, the product of the "overactive imagination of a pop-culture junkie loudmouth." The movies varied wildly in quality and tone: The best included 1997's "Chasing Amy," which deals with romantic relationships among those who are passionate about nerd culture (in this case comic books) and touches on emotional insecurities and various manifestations of sexuality (from heterosexual to the LGBTQ spectrum); 1999's "Dogma," which poked fun at the mythology of the Catholic Church while seriously contemplating whether God is even relevant in our secular and insincere world; and 2006's "Clerks II," which continued the story of Dante and Randall as they transition from being clerks to fast food employees, continuing their pop culture conversations even as they start to feel like failures because they haven't "moved on" despite being in their 30s.

In both these classics and the lesser View Askewniverse fare — including 1995's "Mallrats," 2001's "Jay and Silent Bob Strike Back" and 2013's "Jay & Silent Bob's Super Groovy Cartoon Movie" — the narrative proceedings are anchored by the stoner characters of Jay (Jason Mewes) and Silent Bob (Smith himself). The former is a vulgar, abrasive and hyper-sexual moron, the latter his taciturn and unusually insightful "hetero life mate." As a rule of thumb, View Askewniverse movies tend to work better when Jay and Silent Bob are secondary characters, providing comic relief, moving the plot forward in minor ways and dropping occasional pearls of wisdom. When made front-and-center, the films tend to fall apart, which is disappointing: As Smith's podcasts reveal, he and Mewes are layered and intelligent men in addition to being extremely funny, so in theory they should be able to make their characters equally compelling as primary protagonists. In practice, however, movies in which they serve as the main attraction wind up being more frivolous fun than actually profound.

The term "profound" may seem like a high bar to which to hold a Kevin Smith movie, but it's warranted because of the genius of "Clerks" and its worthier successors. At his best, Smith captures the zeitgeist of an era and becomes the voice of a generation. His films understand the malaise of the dreary, banal lives that modern Americans have had to lead, bouncing around between unsatisfying jobs and unfulfilling relationships and finding solace in friendships, wacky antics and granular conversations about pop culture. The proof that movies like "Clerks" are truly special is that they could so easily have become dated: The internet had not yet been commercialized in 1994, and it radically transformed our culture and society, yet the fundamental forces which control the lives of the main characters in that film are no different than the prevailing ones today. Most Americans still feel economically disempowered (note Dante's iconic line at being forced to work on a day off: "I'm not even supposed to be here today!") and still obsess over the same pop culture properties (Star Wars movies and superheroes are if anything more widely discussed now than they were in the 1990s). Self-identified nerds still struggle with finding meaningful romantic and sexual companionship, and sometimes handle their frustrations in toxic fashion (Randall objectifying women in both "Clerks" films and becoming a sadistic online troll in "Clerks II," Dante serially cheating on women who love him). Our "stories," as they were, often feel less like a structured narrative with a beginning, middle and end than a series of events with no greater purpose than to push us through the calendar, one gray day after another, until eventually we're old, alone and have nothing to show for our lives than the money we made for someone far wealthier than ourselves.

And yet, despite it all, we're still able to laugh. Because as Abraham Lincoln famously observed, barring our ability to laugh, we'd be left with nothing but tears.

Will "Jay & Silent Bob Reboot" be able to capture the fun, the intelligence, the subversive wit and underlying social commentary of the best View Askewniverse films? Only Smith and Company will be able to answer that question when their movie hits theaters in October, but even if it disappoints, nothing will be able to diminish the power of the earlier Kevin Smith movies that have withstood the test of time.