Robert Mueller vs. the House Insanity Caucus: There were no survivors 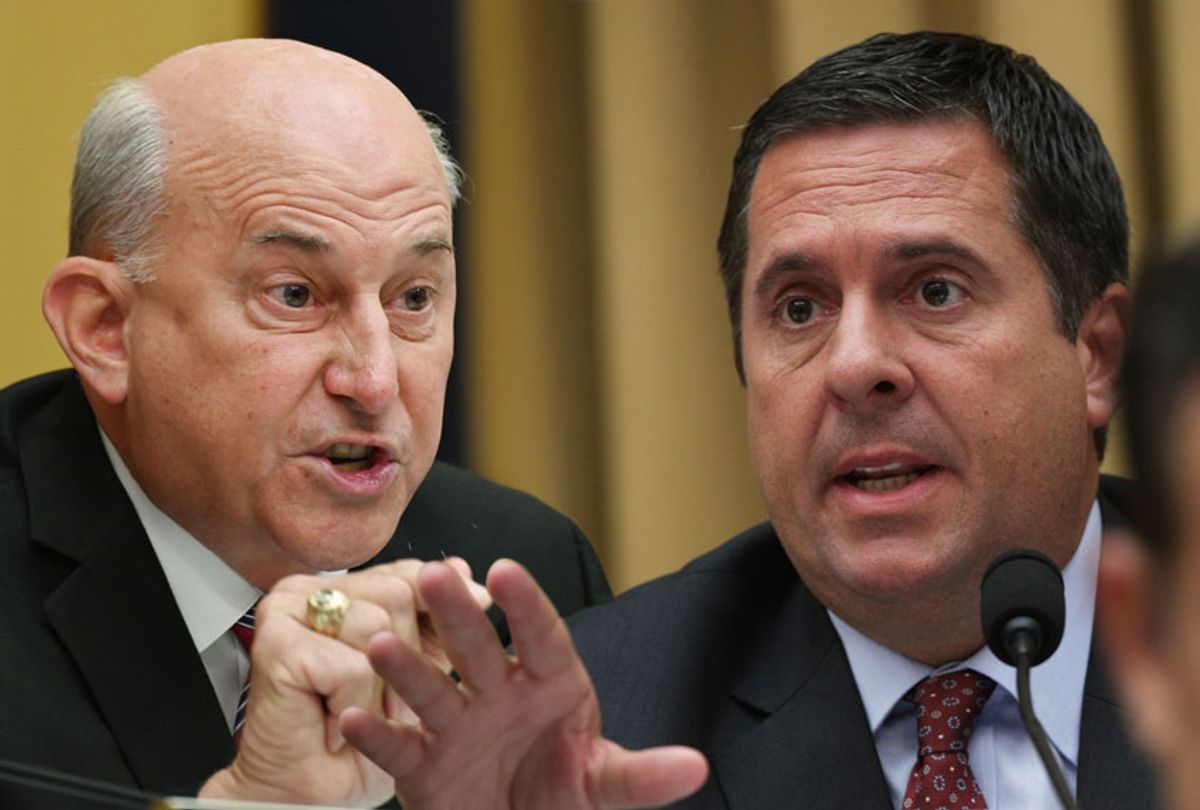 What did we learn from the seemingly endless hours of Robert Mueller’s testimony on Capitol Hill on Wednesday, in which the man for whom the term "lantern-jawed" was invented listened mournfully to numerous congressional monologues and tersely agreed with restatements of things he had already said in his report? Mostly things we should have known already, I suppose — but I don’t want to sound world-weary or act as if the experience was meaningless, in the manner of political observers who’ve seen it all. It wasn’t meaningless, and every day in the unfolding adventure of Donald Trump’s presidency brings us things (very often terrible things) we haven’t seen before.

As my colleague Amanda Marcotte has amply demonstrated, we learned that Mueller detected many signs and symbols of a possible conspiracy between Donald Trump’s campaign and whatever Russian agencies were trying to influence the 2016 presidential election to suit their needs — but not quite enough to merit a criminal indictment. And we learned (again) that even though Mueller had declined, for whatever deeply Protestant personal reasons, even to ask himself whether Trump and his minions had engaged in a criminal conspiracy to obstruct justice — especially his own investigation — he definitely did not determine that the answer to this unaskable question was no.

I know it’s confusing. There will be a quiz, which Rep. Ken Buck, a Colorado Republican, has already failed. Buck wandered into the rhetorical propeller blades during the morning session before the House Judiciary Committee, accidentally leading Mueller to the observation that Trump could still be charged with felony obstruction of justice after leaving office. It was one of the day’s few genuinely entertaining moments:

Buck, who is himself a former federal prosecutor, thought he had Mueller on the ropes there. He fell afoul of the most important Republican commandment of the Trump era: Never ask questions that might actually have answers. You will note that most other Republican members, on both the Judiciary and Intelligence committees, posed “questions” in the form of wandering narratives about Joseph Mifsud, whoever the hell that is. OK, I kind of know. He's the Maltese-born academic and possible Russian spy who Republicans have elected (for the moment) to be the double-secret double agent behind the entire Trump-Russia scandal.

Or they wanted to know about the “third re-up” on the FISA warrant against onetime Trump campaign aide Carter Page. (Jesus, him again?) Or Rep. Jim Jordan, the former sex-scandal-adjacent college wrestling coach, yammered on for a while about the research firm Fusion GPS and its founder Glenn Simpson, who commissioned the infamous “Steele dossier.” Mueller just sat there gamely, more or less listening, and then told them such questions were “outside the purview” of his investigation.

I was about to say that I could take a few thousand words to roll out exactly how Republicans claim to think all that mishmash sticks together into a compelling alternate theory that exonerates the Trump campaign of impure thoughts of any kind while somehow placing Hillary Clinton in league with the Russians — but honestly I can’t, because nobody can. (Try to make sense of this sober-sounding Mifsud-related explainer from The Hill.) As one Twitter wag put it, this stuff is basically fan service, and you can’t understand it unless you’re familiar with the “Fox News Cinematic Universe.”

What sticks out for me above everything else in Wednesday’s spectacle is another thing we already knew but is clearer than ever. Democrats and Republicans don’t just have different points of view or different understandings of America (one of them kind of boring, the other completely terrifying). They inhabit different universes, and communications between the two realms are spotty at best.

I don’t mean this as a glowing endorsement of the Democratic Party in general, which is plagued by all sorts of internal conniptions about ideology and policy and cannot work out how forcefully to resist the rise of (let’s just say it) fascism. But even when they tell lies or spin history to their advantage or deliver sanctimonious stem-winders on the greatness of the American middle class, Democrats remain at least theoretically connected to an epistemology of reality, meaning the idea that facts matter, actions have consequences, and evidence drawn from the past can be a useful guide to the future.

As for Republicans — I mean, what can you say? No doubt their party has been trending toward a Venn diagram of cynicism, self-delusion and conspiracy theory for many years, but this is different. What we saw on those committees was a bunch of Republican members who have undergone something akin to a collective religious conversion or cult awakening. It’s not just that they believe things that aren’t true; we all fall prey to that sometimes. They have gone past the most radical postmodern thinkers and no longer believe in truth at all, or at least do not believe it is something objective that exists in the outside world and can be determined.

As Hannah Arendt and others have proposed, this kind of totalitarian ideology can be immensely seductive to those who feel alienated or left behind by the rapidly changing facts of modern social reality. It can be a great relief to embrace the notion that “facts” are small and contemptible things — the tools of “cosmopolitan” elites — that history is a secret narrative, shaped by sinister forces operating behind the scenes, and that reality at any given moment is whatever the Party or its Leader says it is. Arguably, it is far less significant that Donald Trump has told eleventy million lies about everything imaginable, virtually every time he has opened his mouth, than that an entire political party and nearly half the electorate have been so cravenly eager to swallow those lies and then spit them back up again, polished.

In Mueller’s morning session, we saw Rep. Louie Gohmert of Texas, an infamous right-wing troglodyte who not only wants you to get off his lawn, but is inviting you to go straight to hell after that and enjoy some nonconsensual private time with Satan. He basically hates everyone and is an idiot, and was driven to old-guy yelling and then almost to tears of rage while proposing his especially lame variation of the deep-state conspiracy theory against the good and noble President Trump. (It has something to do with Peter Strzok and James Comey, who to other, cooler Republicans are virtually yesterday’s papers. Gohmert is the author of a treatise called “Mueller Unmasked,” which he of course entered into the Congressional Record.)

In the afternoon, we were treated to the plodding Rep. Devin Nunes of Tulare, California, former Republican chair of the Intelligence Committee, who seems slavishly devoted to working out elaborate, Dungeons & Dragons-style back stories to justify Donald Trump's latest set of improvised paranoid delusions. These days Nunes claims to have connected Glenn Simpson of Fusion GPS to Natalia Veselnitskaya — yes, the Russian lawyer of mysterious provenance who met with Donald Trump Jr., Jared Kushner, et al., in Trump Tower — in an upside-down conspiracy theory that views the entire Trump investigation as a Democratic dirty trick gone wrong.

Sure, Nunes doesn’t even seem half as crazy as Gohmert, but the latter is at least motivated by genuine crackpot passion, which is entirely unconcealed and no doubt extends into many other areas of his life. The literal cowtown congressman, on the other hand — before you start, I have been to Tulare County — is unmistakably a dim little man desperate for meaning, filling up the empty places in his soul with unquestioned loyalty to a depraved and evil cause.  Adolf Eichmann was just such a man.

Whether Republicans like these guys — or, really, all the others — actually believe their preposterous overlapping (or contradictory) theories, or are only deploying them cynically to hold onto power, is pretty much beside the point. People in their universe no longer perceive any distinction between those things. The president is building his Wall, even though he isn’t; six million “illegal aliens” voted in California; “Send her back” wasn’t racist because something-something socialism.

This is all pretty tiresome, but the problem for those of us in this universe is that the lack of any shared agreement about the nature of reality makes it especially ludicrous to speak about a “bipartisan” impeachment process or “doing deals” with Trump on selective legislation or a Republican “epiphany” under President Joe Biden that brings us back to the glorious days of — when exactly? The early Mitch McConnell era? Sarah Palin and “death panels”? House Speaker Newt Gingrich? Give me a break. Ideological diversity is a great thing, but the Republican Party is a dangerous vector of infection; it should be broken up and cast into the wind.

I felt a certain limited compassion for Rep. Will Hurd of Texas, a moderate Republican who barely held his seat in 2018 and is entirely likely to lose it in 2020. (At present he is the only black Republican in the House.) Hurd gamely tried to engage with Mueller on the question of election security, without seeking to score partisan points or to address the criminal conduct of the president. But neither of them had much to say beyond that it was pretty important, and Hurd yielded back his time to the yahoos.

Maybe it’s good that parliamentary norms still hold in the House of Representatives — or at least I get that we're supposed to think that. Members of opposing parties still thank the chairman before launching into their diatribes, yield time to each other and even refer to each other as “friends” or “colleagues” on "the other side." (I never noticed before that it's conventional to refer to the other party as ghosts. Which is kind of cool!)

But all that pseudo-politeness that makes Beltway hearts go pitter-pat is also kind of weird, because what the fuck is the point? They are clearly not friends, and only intersect on conflicting planes of reality. As for the institution in which these people are supposed colleagues — the United States Congress, and the larger project of representative democracy it stands for — it is on the verge of systemic failure. From the look on Bob Mueller’s face through most of that excruciating seven hours, he knows it.