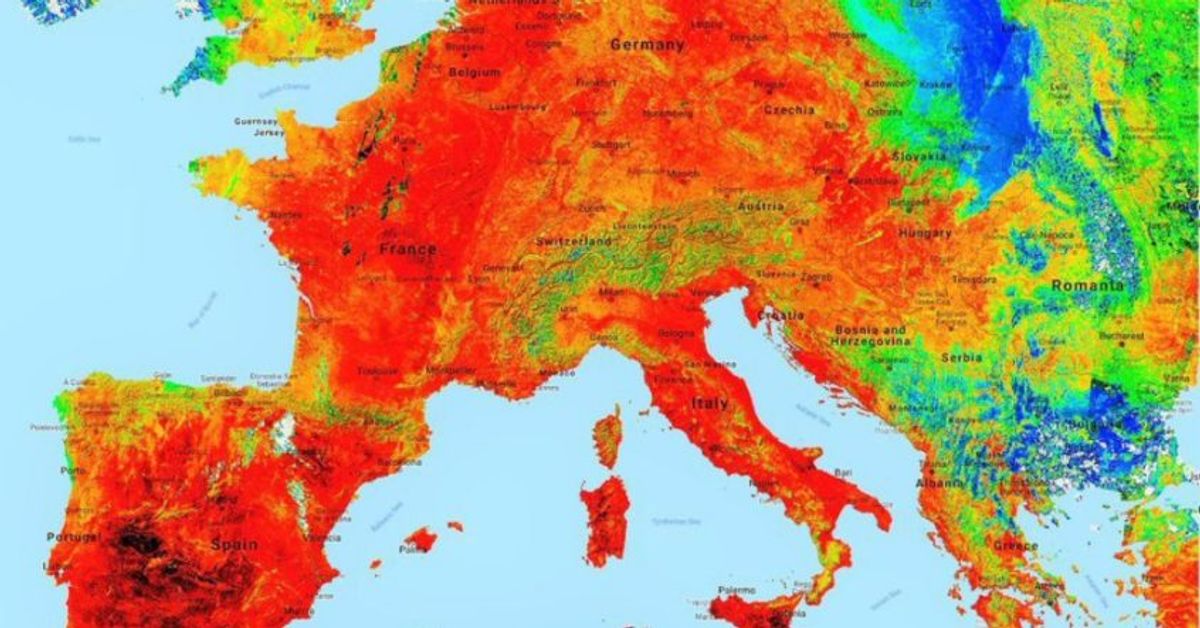 Heat records were shattered Thursday in regions of Belgium, France, Germany, the Netherlands and the United Kingdom.

That came after, as the New York Times reported, "officials sounded high-temperature health alarms on Wednesday, mindful that some previous heat waves have claimed thousands of lives across a region where people are not used to such weather, structures are not built for it and few homes have air conditioning."

Peter Stott of the U.K.'s national weather service, the Met Office, explained on BBC Radio 5 Live that the current heat wave is the result of "weather and climate acting in concert."

"What we have at the moment is this very warm stream of air, coming up from northern Africa, bringing with it unusually warm weather," he said. "But without climate change we wouldn't have hit the peaks that we're hitting right now."

Karsten Haustein, a climate scientist and meteorologist at the University of Oxford, tweeted: "This. Is. Climate. Change."

In a statement Thursday, Johannes Cullmann, director of the Climate and Water Department at the World Meteorological Organization, also connected the scorching temperatures that Europeans are enduring this week to the broader trend of anthropogenic global warming.

"Such intense and widespread heatwaves carry the signature of man-made climate change. This is consistent with the scientific finding showing evidence of more frequent, drawn out, and intense heat events as greenhouse gas concentrations lead to a rise in global temperatures," Cullmann said. "WMO expects that 2019 will be in the five top warmest years on record, and that 2015-2019 is to be the warmest of any equivalent five-year period on record."

Meteorologist Eric Holthaus took to Twitter to track various record-smashing measurements. In his tweets about Europe's life-threatening heat wave, Holthaus repeatedly declared, "We are in a climate emergency."

As the temperature in Paris continued to rise Thusrday, Holthaus continued to post updates. When it hit 108.7°F (42.6°C) in the late afternoon, he noted that "this breaks the previous all-time heat record by 4°F — a shocking amount for a city with such a long history."

Responding to the updates out of Paris, Swedish teen climate activist Greta Thunberg wrote on Twitter, "The heat records are not just being broken all over the place... they are being smashed."

Tweeting with the hashtag #HottestDayOnRecord, Greenpeace U.K. called out global governments for their failure to adequately address the climate emergency.

The British arm of the advocacy group Friends of the Earth warned that "days like this will become the new normal unless governments unite to take real climate action."

"This is not normal," scientist and writer Andrew Steele tweeted about the new temperature records. "The climate is changing. Use your voice, wallet and votes to fight it."

This is the second heat wave to hit Europe this summer, following one last month — which, on a global scale, was the hottest June ever recorded, according to multiple analyses.

Looking ahead, Bob Henson wrote forWeather Underground Wednesday that "toward the weekend, the intense heat will translate northward and eastward into parts of Scandinavia, where monthly and all-time records may fall. By early next week, upper-level high pressure — perhaps stronger than anything ever recorded at these latitudes — will extend from northern Scandinavia to the North Pole. This pattern may cause Arctic sea ice, which was already at a record low extent for the date on Wednesday, to diminish at a rapid rate into early August."

The dangerous temperatures across the continent — as well as in parts of the United States and Asia — come as new research reveals that the planet is warming at a rate not seen in the past 2,000 years.