Monica Crowley, nominee to head PR at the Treasury Department, is a right-wing zealot with a "birther" past 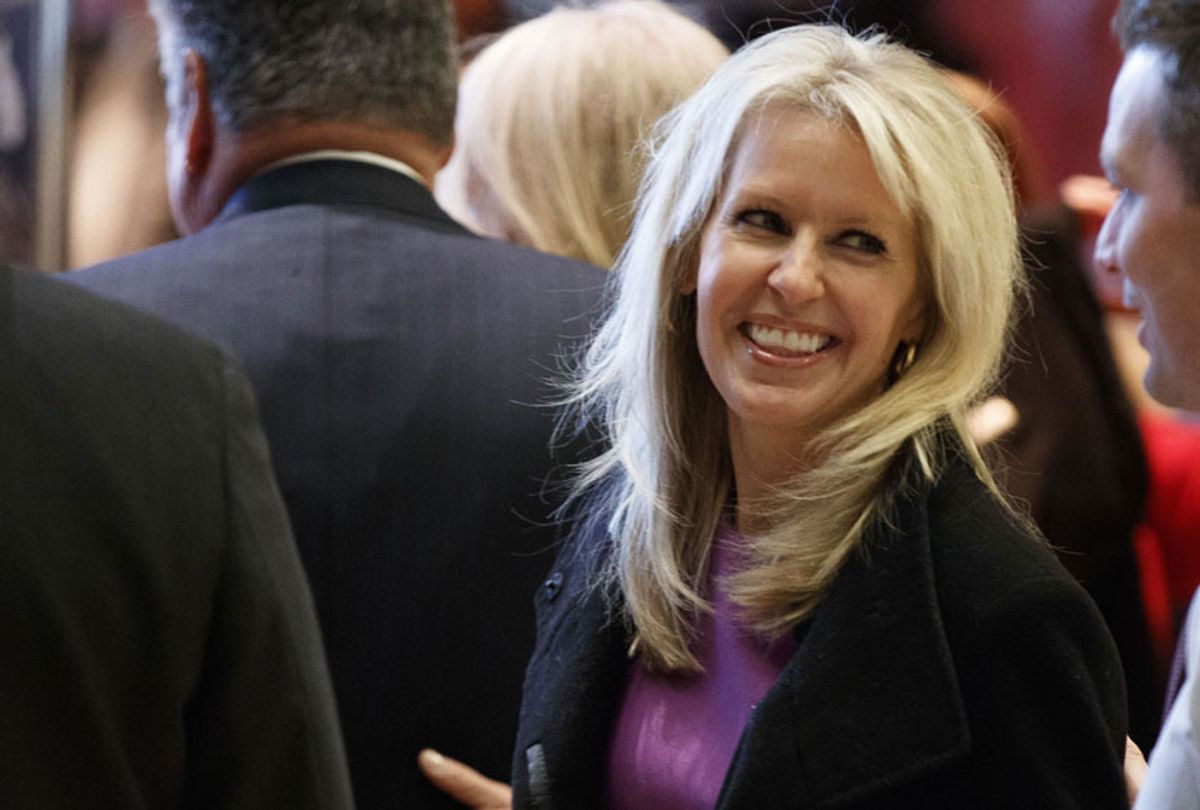 President Trump’s pick to be the next spokeswoman of the Treasury Department is a longtime Fox News contributor who has pushed debunked conspiracy theories about former President Barack Obama.

Monica Crowley was appointed last week to be the next assistant treasury secretary for public affairs. Trump previously named Crowley his senior director of strategic communications for the National Security Council, but she withdrew a month later after CNN reported that Crowley had plagiarized sections of her 2012 book “What the (Bleep) Just Happened?” and her 2000 Ph.D. dissertation.

Crowley, a longtime radio host and pundit, also has a long history of pushing debunked smears against Trump’s predecessor, according to blog posts and tweets flagged by CNN’s KFile.

In a 2010 blog post, Crowley accused Obama of being “loyal to Islam” because he supported the right of a Muslim group to build a community center and mosque blocks from where the World Trade Center stood.

"Maybe politics didn't have anything to do with it, but Islam certainly did. And does. Obama was born to a Muslim father, which under Islam automatically made him a Muslim. He says he converted to Christianity as an adult, which under Islam makes him an apostate," Crowley wrote. “He grew up in Indonesia, which is the most populous Muslim nation on earth. His stepfather was also a Muslim. He was steeped in Islam throughout his formative years, so it should come as no surprise that he has loyalties to Islam. During the 2008 campaign, he even slipped and claimed that the United States has '57' states, instead of 50. The number of Muslim states in the Organization of the Islamic Conference is 57."

"It may not come as a shock that he appears loyal to Islam. The question is: can he be both loyal to Islam and loyal to the United States?" she added. "How could he ... support the enemy?"

In a 2011 blog post, Crowley praised Trump’s birther crusade against Obama and wrote that there were “legitimate concerns” about Obama’s birth certificate.

"If the birth certificate were never a big deal, why did No Drama Obama wait nearly 3 years before releasing it? Why endure and stoke all of the drama? To make those raising legitimate concerns about his origins and policies look like kooks? Maybe," she wrote.

“For over 2 1/2 years, questions have been raised about Obama's origins and background," Crowley claimed. "He was never properly vetted by an adoring press corps, so outstanding concerns existed about his birth certificate (the long-form of which he had never released), where he grew up, his family's religious background, his parents' political beliefs, how he got into top schools such as Columbia and Harvard Law, how he paid for his education, what his grades were, etc. The questions were and are legitimate, and yet were never fully answered. In fact, anyone daring to ask them was painted as a fringe moron at best and racist at worst."

In fact, Obama’s long-form birth certificate was released by Hawaii officials at the president’s request. The document predictably showed that Obama was born in Honolulu in 1961.

In a 2009 blog post, Crowley claimed that Obama “insisted” on being sworn in as president using his full name, Barack Hussein Obama, even though all presidents are traditionally sworn in using their full name. She linked that claim to Obama’s proposed closing of the detention facility in Guantánamo Bay, suggesting that Obama’s “sympathies” were with al-Qaida terror suspects.

"Now comes word that he is granting his first formal television interview as president to Al-Arabiya," she wrote. "Tells you where his head is, and possibly, his sympathies. Just sayin'."

More recently, in 2015, Crowley shared what she labeled an “important column” by Bill Siegel titled “Obama’s Two Faces of Islam,” which argued that Obama was an"Islamic community organizer" who is "conforming US policy to Islam and Sharia."

Crowley, who is the 17th former Fox News employee to join the Trump administration, recently went on Sean Hannity’s show to allege that the incidents of plagiarism reported by CNN were a “despicable” political “hit job” and falsely claimed they had been “debunked.”

“Such attacks on journalism are as much a part of the job description for Trump administration communications staffers as they are for right-wing commentators,” wrote Media Matters’ Matt Gertz. “Crowley has been an eager combatant in this fight, regularly decrying the ‘corrupt,’ ‘leftist’ media while praising Trump for putting the ‘dishonest, hostile, biased, rude fake news in its place …’ These are the sorts of people you end up hiring when you’re drawing on the Fox green room for your staff.”