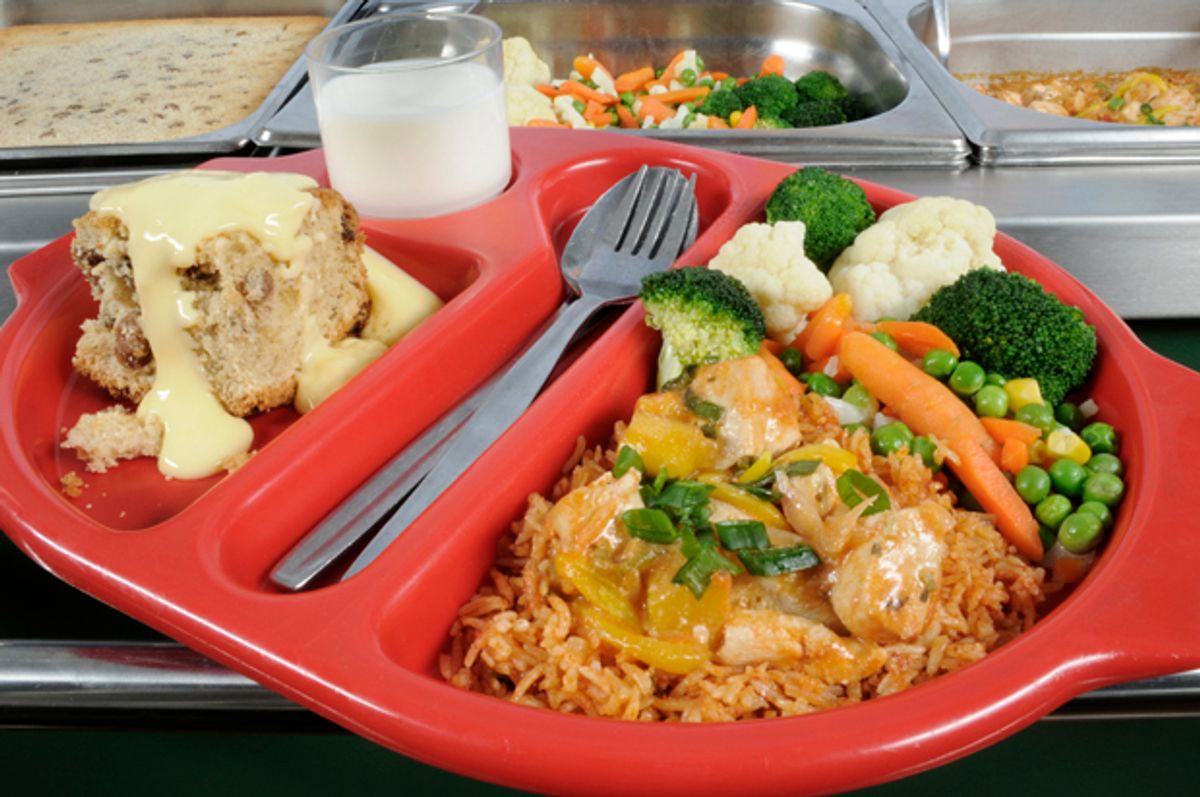 Some people believe so fervently in the dogmas of free-market capitalism that they would rather rip hungry children away from their families than re-evaluate the tenets of their secular religion.

This appears to have been the case in my home state of Pennsylvania, where CNN reports that earlier this month the Wyoming Valley West School District sent out hundreds of letters to parents threatening to send their children into foster care if they were unable to pay off their lunch debts. Seriously. That crisis was resolved (or at least addressed) last week after the district decided to accept donations to assist parents with their school lunch debt, something it had refused to do at first.

It's not clear what political affiliations the individuals behind the original decision to threaten impoverished families may have. The district did not respond to several phone calls from Salon on that question. Luzerne County, Pennsylvania, can be fairly described as a purple county in a purple state: Donald Trump got 58 percent of the vote in 2016, but Democrats had carried the county in every previous election since 1988.

Regardless, the notion that people who can't pay for their children's school lunches should face punishment, rather than sympathy and compassion, is distinctly related to modern-day conservative ideology. It would be inconceivable in a society where free market capitalism was recognized as flawed, and where those who are struggling because of those flaws were treated as victims deserving of help.

The incident calls to mind the famous story about New York Mayor Fiorello La Guardia (perhaps apocryphal), when he presided over a court case involving a grandmother who had stolen bread to feed her starving family. (Mayors were allowed to serve as magistrates at that time.) After ruling that she had indeed broken the law, La Guardia supposedly paid her fine and ordered everyone in his courtroom to give her 50 cents "for living in a town where a person has to steal bread so that her grandchildren can eat."

That story, true or not, harkens back to a sage truth often forgotten in modern America, but which drives the plot of Victor Hugo's "Les Misérables," for instance: If people live in a society where they cannot feed themselves or their families without breaking the law, the problem is not with the lawbreakers, but with the society.

School board president Joe Mazur did not seem to share this view when he defended the letters to the Wilkes-Barre Times Leader, even though he conceded that they were "threatening and a little strong." He claimed that "we have people that owe money for a year, some maybe more, and we tried all kinds of ways to contact them" and that "the last letter sent out was a nice letter saying come in, we need to discuss this, and it didn’t get one return."

In a suspiciously convenient coincidence, Mazur also said that Joseph Muth, a district official who sent the letters, had subsequently discovered that the district's indigent students were eligible for free breakfasts and free lunches for the next five years. (Muth told CNN affiliate WNEP, however, that he still wants indebted parents to pay.)

For what it's worth, Laurence Tribe — the Carl M. Loeb University Professor at Harvard Law School — argued that policies like the one initially threatened by Wyoming Valley West are almost certainly illegal.

"This public school policy is outrageous and almost certainly unconstitutional," Tribe told Salon by email. "Threatening to take children away from their parents because their parents fail to pay for particular items supplied by the school violates both due process and the substantive rights of parents to bring up their own children. It also deprives people of the equal protection of the laws in violation of the 14th Amendment. I cannot imagine such a policy surviving judicial attack."

Defenders of the school district will no doubt claim that they were just trying to be compensated for their school lunches. I suspect this is not true, and that a hostile ideology motivated the district's actions. Consider a) the draconian nature of the letters, b) the district's initial unwillingness to accept outside donations, c) the district's weirdly timed discovery that it could have provided free meals the whole time and, d) the fact that the district's approach to poor families virtually drips with contempt.

Tribe's argument that this kind of punitive approach is unconstitutional aside, policymakers and opinion-shapers often seek to punish the poor. The New Republic published an exposé earlier this year revealing that New York City's child welfare agency has a history of unjustly targeting low-income families, who are predominantly people of color. Conservative pundits like Ann Coulter often argue that child poverty is linked to parents' immoral behavior — if they lived more virtuous lives, apparently, they and their children wouldn't be poor.

As Speaker of the House, Paul Ryan emphasized cutting programs that would help starving families. Salon's Chauncey DeVega wrote in 2017 that "conservatives are more likely than liberals or progressives to believe in what's known as the 'just world fallacy,' whereby people who suffer a misfortune are viewed as somehow deserving their fate."

But this isn't simply a case of conservatives refusing to believe that the world can be an unfair place. One of the underlying tenets of free-market capitalism is the idea that in the long run it works best for everyone, that anyone who wants to rise out of poverty has the ability to do so. So its defenders cannot accept any evidence that people are economically suffering in America through no fault of their own. They may argue that poor people's plight is caused by big government, high taxes, job-stifling regulations and so on — but that's largely an attempt to change the subject.

In situations where immediate relief is required and private agencies are simply not up to the task, fans of the free market are nearly out of options. They can acknowledge that there are limits to the virtues of capitalism or they can insist that the poor themselves must be to blame, because the market is always rational.

I encountered an excellent demonstration of this principle in my interview with conservative pundit Ben Shapiro last March. I mentioned a speech Shapiro had delivered at the University of Michigan arguing that "there should be a discussion about whether the kids ought to be taken away" from families who can't afford to feed them and therefore require free school lunches, and asked him whether he lacked compassion for those families. He responded:

No, I don't see how that lacks compassion in any way. If you are unable to feed your child, and you cannot find a social fabric to help you take care of that child, your child should not be with you. You're living in the freest, most prosperous country in the history of the world. It is not all that expensive to pay for a child's lunch.

I responded that we live in a society where some people work full-time and are still unable to support their families. Shapiro cut me off.

"I do not accept your premise that we live in a society where people literally cannot afford to feed their children, [where] their children will starve without a free school lunch," he said. He then resisted my efforts to turn the conversation into a larger discussion about systemic poverty, suggested that I wanted "to make the case for a Bernie Sanders salary redistribution" and — tellingly — added that free school lunches did not "incentivize proper behavior from parents."

At some point, the burden must fall on those who hold views like these to recognize where their abstract theories end and the lived experiences of other people begin. That means accepting premises about the shortcomings of our economic system with which they're uncomfortable. Certainly some people can and do rise out of poverty through hard work, talent and luck — but most people who are born in poverty will die in poverty, and not because they are sinful or lazy.

If we're going to eradicate poverty and lessen economic inequality, we must start by abandoning dogmatic approaches toward policy and instead look at what meets the actual needs of real-life human beings. One of America's greatest presidents, Franklin D. Roosevelt, famously argued that our nation would only provide effective relief during the Great Depression if it engaged in "bold persistent experimentation. It is common sense to take a method and try it. If it fails admit it frankly and try another. But above all try something."

FDR ultimately favored programs that would today be classified as "progressive," but that wasn't because he started out with an agenda. It was because he attempted a number of approaches, and chose the ones that were more effective. Policymakers like those in the Pennsylvania school district, and conservative ideologues like Coulter or Shapiro, are simply not willing to risk the possibility that their basic economic beliefs are wrong.

If those people had little power or influence, their arrogance might be harmless. But real people are suffering as a result of their dogmatism, and we must recognize their approach toward free-market capitalism for what it is: A dangerous secular religion, one that places such a premium on self-validation that it prefers to destroy innocent lives rather than challenge its core beliefs.