Earth's robber-barons are salivating over bringing authoritarian capitalism to space 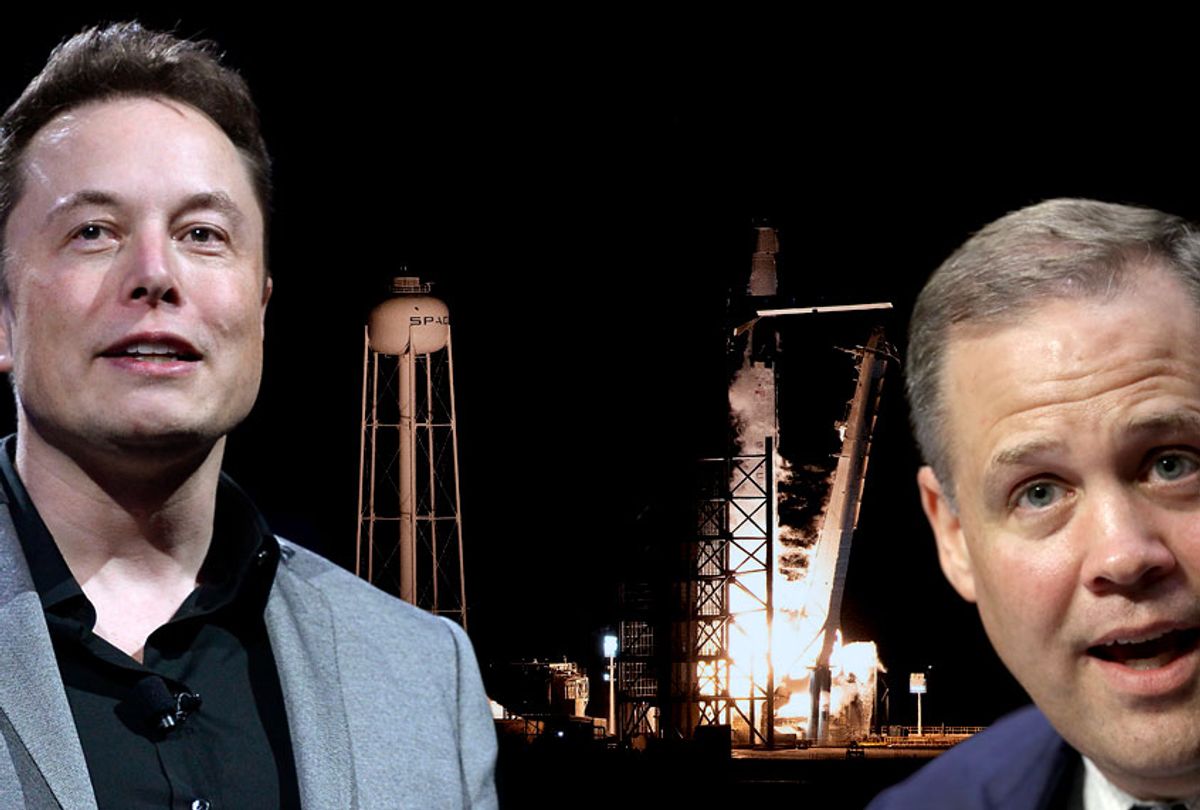 Imagine, for a moment, that the Axis had won World War II. In this nightmare scenario, the Germans and their fascist allies would rule much of the world's nations by proxy, relaxing into the easy chair of hegemony. It seems probable that the Third Reich would have put a satellite into orbit in fairly short order, followed, perhaps, by a man into space, and likely a man on the moon.

The Third Reich was, like much of Europe, an imperialist nation; they had their own equivalent of American Manifest Destiny, although their expansion "front" was to the east. (A book by Carroll P. Kakel III, "The American West and the Nazi East," chronicles these unsettling parallels.) But after Earth had become fully colonized, they would likely find that space is the only remaining frontier. As Nazi scientists gained more knowledge of material science and the effects of space on human health, their citizens and top engineers would probably set their sights on the moon, and then Mars. The Nazi version of Elon Musk and Jeff Bezos would celebrate what it would mean to bring the Third Reich to the stars.

If the Nazis were to follow imperialism to the next logical step, and establish human colonies on other worlds — asteroids, moons, space stations, or on planets like Mars — a social and political system rooted in oppression, hierarchy and racial superiority would spread, like an infection, to other distant bodies where they would be far more difficult to extract. Part of that is due to an intractable communication problem: even between the most distant regions of Earth, the speed of light is not a noticeable constraint on the amount of time it takes to communicate. The same is not true in space.

Authoritarians, of both the Nazi and the corporate variety, are not necessarily fond of free speech nor free communication; they are powerful tools for upsetting the social and political order. Even here in the United States, supposed bastion of liberal democracy, we've seen this play out before. In 2011, the Bay Area Rapid Transit (BART) public transit system suppressed communications networks in order to stifle dissent. As protests over the BART police shooting of Charles Blair Hill spread around the Bay Area, the regional transit system literally turned off the underground cell phone towers that would allow cell and data transmission while underground. The agency, unwisely, openly admitted it:

"Organizers planning to disrupt BART service stated they would use mobile devices to coordinate their disruptive activities and communicate about the location and number of BART Police," the transit agency said. "A civil disturbance during commute times at busy downtown San Francisco stations could lead to platform overcrowding and unsafe conditions for BART customers, employees and demonstrators."

The American Civil Liberties Union issued a harsh rebuke, and questioned whether the move was even legal for a government agency to do this.

"All over the world, people are using mobile devices to protest oppressive regimes, and governments are shutting down cell phone towers and the Internet to stop them," said Michael Risher, a staff attorney for the American Civil Liberties Union of Northern California. "It's outrageous that in San Francisco, BART is doing the same thing."

If this is how an American governmental agency behaves when confronted with the prospect of a legitimate peaceful protest, imagine how pro-Martian colonizer Elon Musk — who notoriously detests labor — will behave when his Martian dishwashers strike for higher wages.

My point is, if you think that social and political struggles are difficult on Earth, where oxygen is free and the outside is traversable without an airtight suit, just wait until you see what happens when you bring humans to Mars — a planet where round-trip communication with Earth takes forty minutes at a minimum, and nighttime surface temperatures vary between -100 and -195° Fahrenheit. On our capitalist planet, there are no workers whose employers can threaten to leave them stranded, 80 million miles from home, if they don't do their bidding. On Mars, a disgruntled worker's employer could compel them to work by threatening to ever let them go home to Earth again. The potential for slavery on the red planet cannot be underestimated.

Historically, the worst capitalist labor abuses on Earth happen to the most powerless workers in situations where no one is looking. Horrific tales of sexual harassment in Antarctica made sense inasmuch as its barrenness makes it an ideal place to be manipulative without anyone noticing. Mines, given their remote nature, are often rife with exploitation — and the history of miner treatment should give us pause as to how workers on Mars or on one of Jeff Bezos's space stations might be treated.

This warning is prescient currently because of the intense focus of both government and private actors on the potential to privatize space travel. NASA Administrator Jim Bridenstine wants to create a "robust commercial marketplace" for space travel, has proposed a public-private partnership for the moon, and has spoken of privatizing the international space station.  Elon Musk, one of NASA's suppliers in the brave new privatized world, is perfervid about building a Mars colony. Jeff Bezos, the richest human in the world, plans to build giant space stations; his rationale for space colonization is that "we are in the process of destroying this planet," something he actually stated with no palpable sense of irony.

There are many who adulate Musk and Bezos, and view them as our generation's heroes. Yet the fact that these men honestly believe they are the ones to lead humans to space has nothing to do with any of their unique qualifications; it is due to a series of historical accidents that randomly thrusts sociopaths to the top of the capitalist food chain. Five decades of deregulation, neoliberal economic policy, and reduced taxation on the highest tax bracket have led us to a unique point in human history, where a few individuals are so wealthy that they have the ability to fund space travel. Again, this is not because these individuals are uniquely competent, nor qualified, to jumpstart colonization; it is an accident of history and economics that makes this situation possible. Nothing more.

My fear with space colonization is that humans tend to think of it as inherently different than other political struggles, merely because humans haven't gone to space yet. The idea of space colonization as a cool, fun, exciting, sci-fi thing inhibits our ability to think critically about what it would actually mean to let a bunch of tech CEOs unilaterally colonize the solar system.

There are precedents for the political aftereffects of space colonization: we have seen situations where a controlling institution tries to stifle communication on their property to prevent protest; we have seen how workers are exploited in cordoned spaces where their employers think no one is paying attention; we have seen how corporations entrap workers in hostile environments by giving them housing and food, and using that as a wedge to prevent dissent; and we have seen how corporations harvest the labor of the poor and vulnerable in order to avoid paying first-world wages to people who expect benefits.

All of these scenarios seem likely to play out in our future if we don't fight back against the space imperialists. If you thought capitalism on Earth was horrific, wait till you see what it looks like in a vacuum.