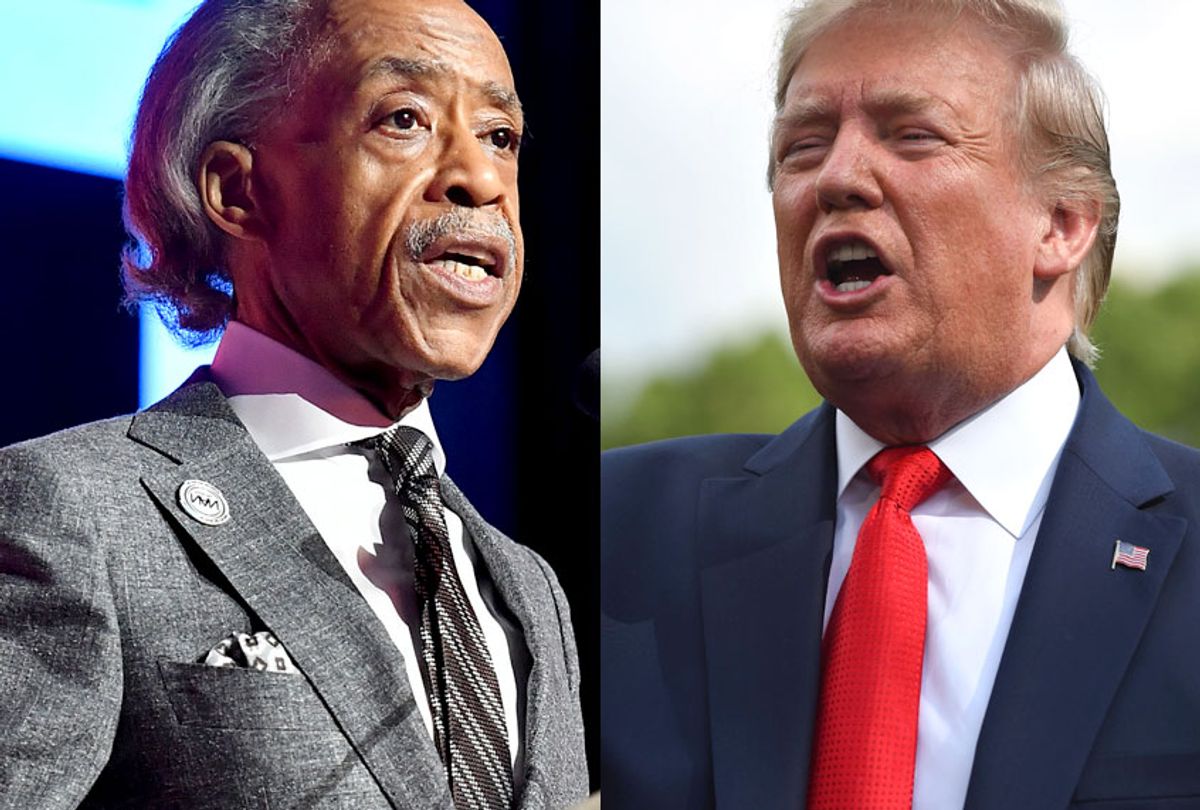 President Donald Trump lashed out at Reverend Al Sharpton after the MSNBC host announced he was headed to Baltimore in the wake of racist tweets sent by the the commander-in-chief which called the Maryland city a "disgusting, rat and rodent infested mess" and targeted the civil rights icon who represents it in Congress.

"I have known Al for 25 years. Went to fights with him & Don King, always got along well. He “loved Trump!” He would ask me for favors often. Al is a con man, a troublemaker, always looking for a score. Just doing his thing. Must have intimidated Comcast/NBC. Hates Whites & Cops!" Trump tweeted on Monday morning.

A few minutes later, he also addedd, "Baltimore, under the leadership of Elijah Cummings, has the worst Crime Statistics in the Nation. 25 years of all talk, no action! So tired of listening to the same old Bull...Next, Reverend Al will show up to complain & protest. Nothing will get done for the people in need. Sad!"

He later wrote, "Al Sharpton would always ask me to go to his events. He would say, 'it’s a personal favor to me.' Seldom, but sometimes, I would go. It was fine. He came to my office in T.T. during the presidential campaign to apologize for the way he was talking about me. Just a conman at work!"

Sharpton responded to Trump's tweets with a photograph from 2006 showing the future president talking to the Rev. Jesse Jackson, James Brown and himself.

"Trump at NAN Convention 2006 telling James Brown and Jesse Jackson why he respects my work," Sharpton wrote in his tweet. "Different tune now."

In a follow-up tweet, he added, "Trump says I’m a troublemaker & con man. I do make trouble for bigots. If he really thought I was a con man he would want me in his cabinet."

Sharpton also linked to a RawStory article about his recent appearance on MNSBC's "Morning Joe," during which the reverend pointed out that "on December 1, 2016, three weeks after the election, he called me after seeing me on this show, ‘Morning Joe,’ and asked me to come and meet with him."

He continued, "He was president-elect, and he wanted me to come meet with him at Mar-A-Lago. I said, ‘I will only meet with you if I can bring other leaders of national civil rights organizations. (Trump said,) ‘No, Al, I just know you, let’s meet and let’s talk.'"

As Sharpton observed, it would not make sense for Trump to want to meet with someone whom he supposedly held in such low regard.

The feud between Trump and Sharpton began as the latter expressed support for Cummings following Trump's racist attack on the Maryland congressman.