Democratic debate in Detroit, part one: Liz and Bernie vs. the "moderates"

Warren and Sanders will square off against the middle-roaders, promising some serious policy-wonk scuffles 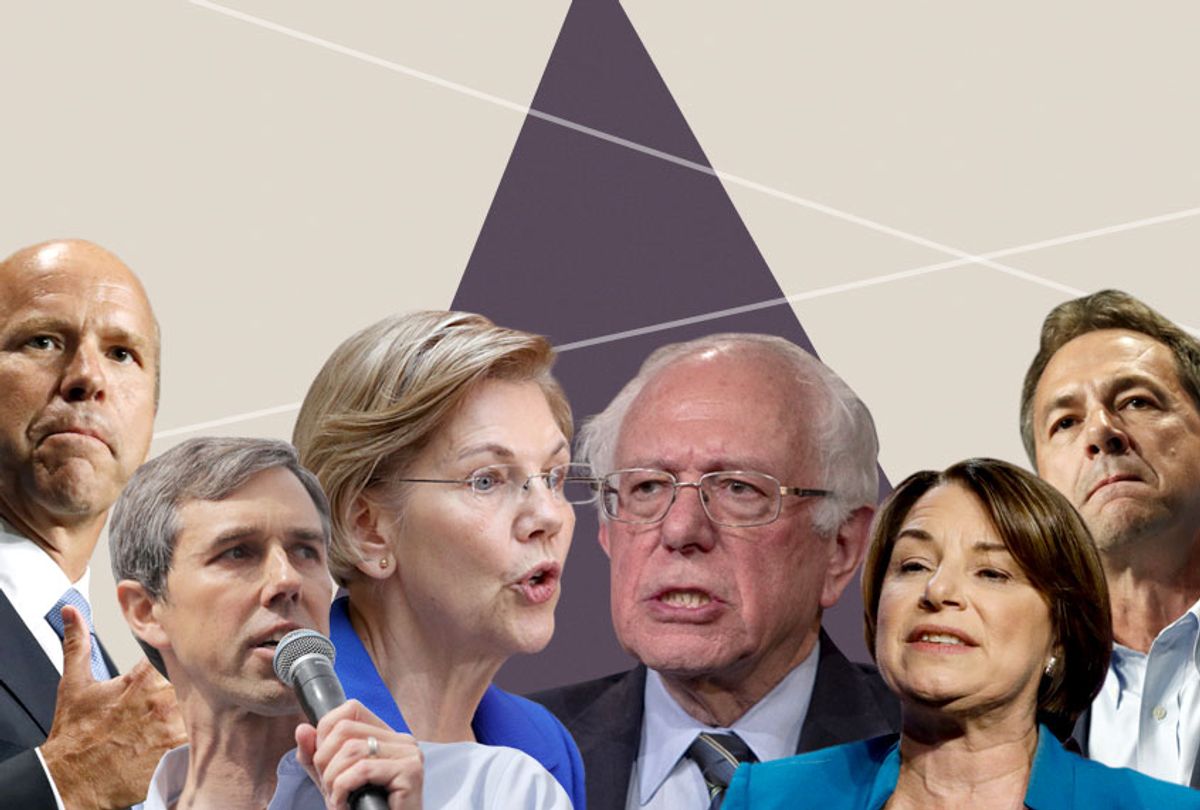 Night one of the second round of Democratic debates, hosted by CNN and held in Detroit, will be a feast for the policy wonks. It always is, frankly, when Sen. Elizabeth Warren of Massachusetts is in the mix. Like a college professor who inspires her students to be their best selves — which was her job before she got into politics — Warren raises the floor for intelligent discourse at these sort of events,  as shown in the first night of debate last month, which was sharper and more policy-focused even during the long stretches when she wasn't talking.

The horse race-obsessed media is already billing Tuesday's debate as a showdown between Warren and Sen. Bernie Sanders of Vermont, as the two are the most economically progressive candidates in the race and assumed to be competing for the same voters.

But anyone hoping for fireworks between these two will likely be sorely disappointed. It's not just that Sanders and Warren are allies and friends in the Senate — whatever the overheated tribes of Twitter may proclaim — and have declared a truce during the campaign. Neither seems to have the stomach for a bare-knuckle brawl, either, assessing that attacking each other would do less to bolster their own chances than it would harm their joint project of pulling the Democratic Party at least a bit toward the left.

It's also wrong to assume that Warren is the biggest threat currently to Sanders' poll standing. As the trend lines at Morning Consult show, Sanders dropped in the polls when former Vice President Joe Biden joined the race: The second choice of most Biden supporters is Sanders, and vice versa. Policy and ideology simply don't matter as much to voters as they do to pundits, and Warren and Sanders' demographic bases don't intersect nearly as much as many observers might assume. So there's a lot of risk and little potential reward for those two to go after each other.

That doesn't mean Tuesday night's debate will be boring. On the contrary, Warren and Sanders will be standing at center stage, flanked primarily by the more moderate Democrats in the race. (Let's exclude junk candidate Marianne Williamson, who is neither flesh nor fowl.) So if the CNN moderators — Jake Tapper, Dana Bash and Don Lemon — do their job right, we could see a robust debate about the future of the Democratic Party.

The moderates on stage, including onetime media darlings Sen. Amy Klobuchar of Minnesota and former Rep. Beto O'Rourke of Texas — along with Gov. Steve Bullock of Montana, a new addition this time around — are well behind in the polls and need to make an impression. Expect that they'll be aggressive in their criticisms of Warren and Sanders for offering bold visions on health care, debt relief, free or low-cost college, child care and other generous social programs. It's likely that both will be accused of promising the moon without offering a way to pay for it.

This may get progressives steamed, but it really shouldn't. On the contrary, it's a good opportunity for Warren and Sanders to showcase their ability to mix it up and to defend themselves against strong attacks. Considering that the main concern of Democratic voters, understandably enough, is to nominate someone who can take on Donald Trump in the general election, this is no small thing. There's every reason to believe both Warren and Sanders will be able to bat off the interminable "How will you pay for it?" questions, as both have spent months answering just such queries on the campaign trail.

Policy debates rarely lead, however, to the kind of fireworks that happened on the second night of the first round of debates in Miami, when Sen. Kamala Harris of California confronted former Vice President Joe Biden on issues of racial justice. We might hear raised voices from some of the outsiders seeking to make an impression, like Bullock or former Rep. John Delaney of Maryland. But ultimately, it's hard to get politicians past the canned emotions when talking about matters like tax rates and tuition subsidies.

Still, Sanders comes into the debate having come off a truly emotional trip to Canada, where he accompanied a caravan of Americans traveling to a pharmacy in Windsor, Ontario, to buy vials of insulin for $36 that cost $340 on our side of the border. This should be irresistible bait to the moderators to open up a discussion about health care costs. (Although we can never underestimate the ability of cable-news talking heads to screw things up.) Sanders basically teed up this evening a policy debate that brings the issues to a human level, also an arena where Warren shines.

Considering the coarse ugliness of the rest of the news cycle, and the virulent racism spewing from the White House, it will be nice to have a night of smart people talking about how to improve people's lives, even without fireworks. That's reason enough to tune into the first night of Democratic debates, which begins on CNN at 8 p.m. Eastern time.