Rashida Tlaib rips Trump in wake of racist attacks: "He is focused on a hate agenda for our country"

Tlaib makes one thing clear in a new op-ed: She will not back down to the president's racist attacks 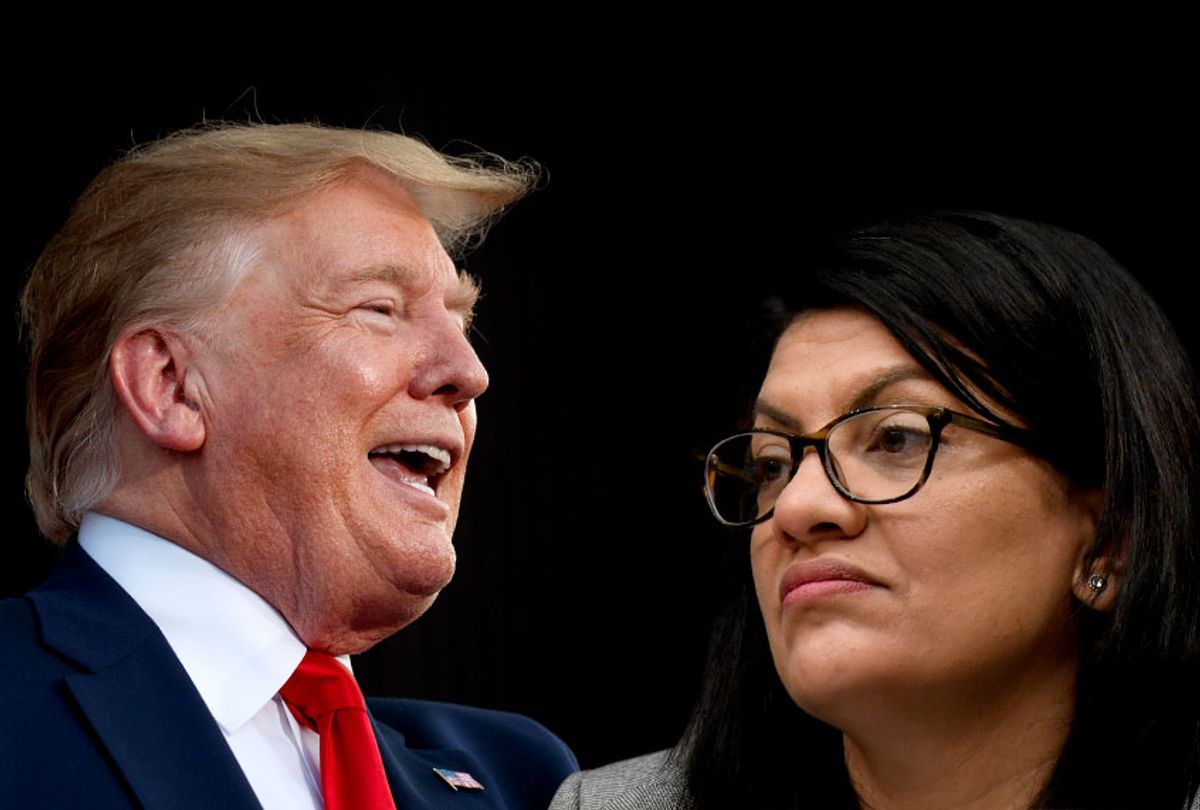 Rep. Rashida Tlaib, D-Mich., fired back at President Donald Trump after the freshman legislator found herself the target of racist tweets, accusing the commander-in-chief of being "focused on a hate agenda for our country."

A recent flurry of tweets sent by Trump took aim at Tlaib and the three other progressive progressive women of color who form "the squad": Reps. Alexandria Ocasio-Cortez of New York, Ilhan Omar of Minnesota and Ayanna Pressley of Massachusetts.

"Why don’t they go back and help fix the totally broken and crime infested places from which they came," the president tweeted earlier this month.

In a new op-ed published Monday in the Washington Post, Tlaib described the president's attacks as both "harmful" and “unhinged.”

"This behavior is sadly familiar — almost every day, he disgraces his office with rhetoric rooted in hate," the Michigan congresswoman wrote of Trump. "He did it again this weekend when he trashed the city of Baltimore."

Indeed, Trump directed another racist Twitter tirade at Rep. Rlijah Cummings, D-Md., in recent days calling him a “brutal bully” and the majority-black district he represents “a disgusting, rat and rodent infested mess.”

"If he spent more time in Baltimore, maybe he could help clean up this very dangerous & filthy place," the president wrote on Twitter.

Tlaib made one thing clear in her op-ed: She will not back down to the president's strikes.

"While Trump tweets, I will work for the people who sent me here and to ensure they — and all other Americans — have someone who isn’t afraid to speak truth to power," she wrote. "Hateful, bigoted or racist tweets won’t stop me, nor will they stop our democracy."

"I will always outwork the hate," the Michigan congresswoman continued. "My district and country depend on it."

More of Trump's talking points about Tlaib and her House colleagues were echoed Monday evening on Sean Hannity's Fox News program when the primetime host infamous for his late-night calls with the president accused "the squad" of "radicalism" and "virulent anti-Semitism."

During that segment, "Fox & Friends Weekend" co-host Pete Hegseth accused Tlaib of having a “Hamas agenda" following her criticisms of Israel.

"I mean, if you look at what Rashida Tlaib talked about President Trump having a 'hate agenda,'" Hegseth told Hannity. "I can then, therefore, look at her and say that she has a 'Hamas agenda.'

"If you look at — she was — in June of this year, she criticized the New York Times, because they, in her mind, favored Israel when Hamas was launching rockets from the Gaza Strip, and she said it didn't reflect well enough on the Palestinians in the Gaza Strip," the Fox News host added. "And we know it's controlled by Hamas. So, if she wants to throw around labels, we can, too."