Bernie Sanders and Elizabeth Warren fight back attacks from moderates over a heated debate topic: Medicare for All 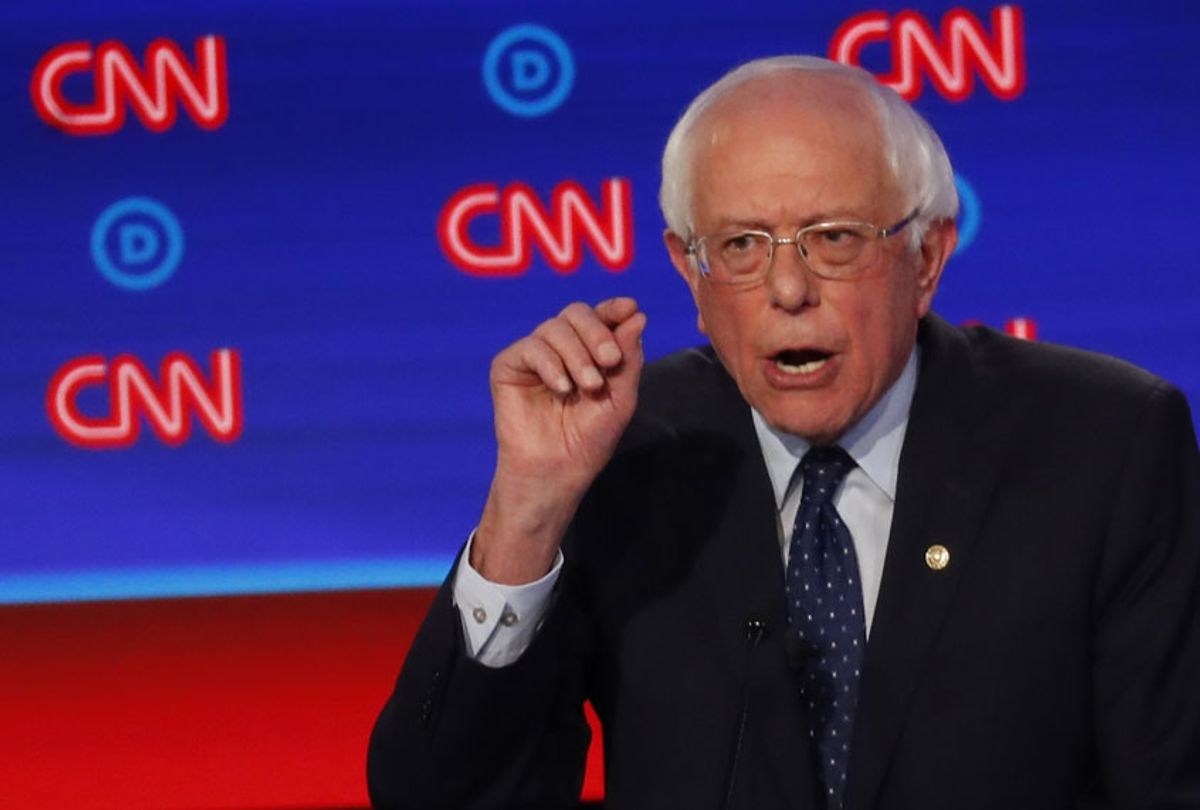 When it comes to health care reform, the first night of the second round of Democratic presidential debates revealed a stark policy divide among the nearly two dozen candidates vying to take on President Donald Trump in 2020.

Battle lines were drawn as the progressives standing in the center of the stage — Sens. Bernie Sanders of Vermont and Elizabeth Warren of Massachusetts — found themselves fielding attacks from all sides on health care.

Both Sanders and Warren support "Medicare for All," a health care proposal that would abolish private insurance in favor of a government-sponsored system in which almost every individual is covered by Medicare, the federal insurance program which primarily serves roughly 44 million people age 65 and older and some Americans with disabilities. Other candidates served up more moderate proposals that would keep private insurance while adding a new public plan as an option.

Sen. Amy Klobuchar, D-Minn., said she backed a "public option" that would build on former President Barack Obama's signature legislation, the Affordable Care Act (ACA), also known as "Obamacare." Her plan would allow Americans to voluntarily opt into a government-sponsored plan — like Medicare or Medicaid — alongside those offered by private insurers. It is something of a compromise between a single-payer model and the current system, in which only certain Americans qualify for government-sponsored programs, and is considered a moderate alternative to a single-payer system.

Meanwhile, former Texas Rep. Beto O'Rourke argued that plans to eliminate private insurance talk "about taking away people's choice," while Rep. Tim Ryan of Ohio claimed that Sanders and Warren would take away health care from union members in the industrial Midwest. Klobuchar, for her part, pointed out that Sanders had co-sponsored public option bills in the past, even as he now criticizes such plans for not going far enough.

Later in the debate, Warren addressed the attacks to cheers:  "I don't know why anyone goes through the trouble of running for president to tell us what we can’t do and what we shouldn't fight for."

"I am not afraid, and for Democrats to win, you can't be afraid," Warren said, adding that her party will not win "with small ideas and spinelessness."

Sanders also pushed back against the criticism, prompting one of the most memorable lines of the debate.

"You're wrong," Sanders said as he defended himself against Delaney's criticism, before arguing to the former health care executive that he probably made money off the system.

"I do know it — I wrote the damn bill," Sanders hit back after Ryan accused him of not knowing "all of the union contracts in the United States."

Even to moderator Jake Tapper of CNN, Sanders quipped, "Jake, your question is a Republican talking point."

Sanders highlighted during the debate that his Medicare for All proposal, which seeks to eliminates premiums, co-payments and deductibles, would cover virtually all health expenses, including: inpatient and outpatient hospital care, emergency services, primary and preventative care, prescription drugs, mental health and substance abuse treatment, maternity and newborn care, pediatrics and home- and community-based long-term services. Dental, hearing and vision care would also be included.

The Sanders campaign quickly seized on the fiery exchange, tweeting that new contributions would earn supporters an "I wrote the damn bill" sticker.

The exchange was part of a longer, fiery debate among the crowded primary field about the federal government's role in providing health care, with Sanders and Warren expressing their support for a Medicare for All system.

But several candidates expressed support for different plans, which  would allow individuals to keep private insurance while expanding Obamacare.

The battle over Medicare for All that unfolded live Tuesday on national TV exposed major fault lines among the Democratic candidates over how to reach universal coverage in America. It was a sign, too, of how some presidential hopefuls remain exceedingly cautious about the potential political liabilities of endorsing a single-payer system, even in a primary contest in which candidates are fighting for the crown of "most progressive."

It has also emerged at a time when voters across the aisle are deeply frustrated with current state of the nation's health care system.

Health care reform was a prominent issue in the 2008 election cycle, and the passage of Obamacare in 2010 brought sweeping changes to the nation's health system. The number of uninsured Americans fell dramatically since the law passed, dropping from 48.6 million people in 2010 to 29.7 million in 2018. Studies have found that the ACA caused fewer people to struggle with medical bills or avoid or delay treatment because of cost and that medical debt has declined.

Still, health insurance in the U.S. remains among the most expensive in the world, and coverage remains increasingly out of reach for millions of Americans. The health care system is still difficult to navigate, meaning many consumers to struggle to get the care they need in a timely fashion, make sense of medical bills and understand insurance plans filled with abstruse cost calculations and bureaucratic jargon. The U.S. also remains an outlier among developed nations for not having universal health insurance.

Medicare for All has come under heavy scrutiny from Republicans and conservative policy makers, who have cited objections over the proposal's estimated cost and reimbursement rates paid to healthcare providers, which they claim would cause a massive doctor shortage and force hospitals to close. Critics have also expressed concern that a large influx of patients into the health care system could lead to long wait times and decrease the quality of care. Others have argued that pharmaceutical price controls would stifle innovation.

The projected price tag of Sanders' plan remains unclear — the Congressional Budget Office (CBO) has not scored it — but it would likely cost tens of trillions of dollars. Sanders has said he would finance it through a host of taxes and by letting the government set health care prices.

Sanders has repeatedly stressed that his Medicare for All plan has "nothing to do with health care. It's all about greed and profiteering. It is about whether we maintain a dysfunctional system which allows the top five health insurance companies to make over $20 billion in profits last year."