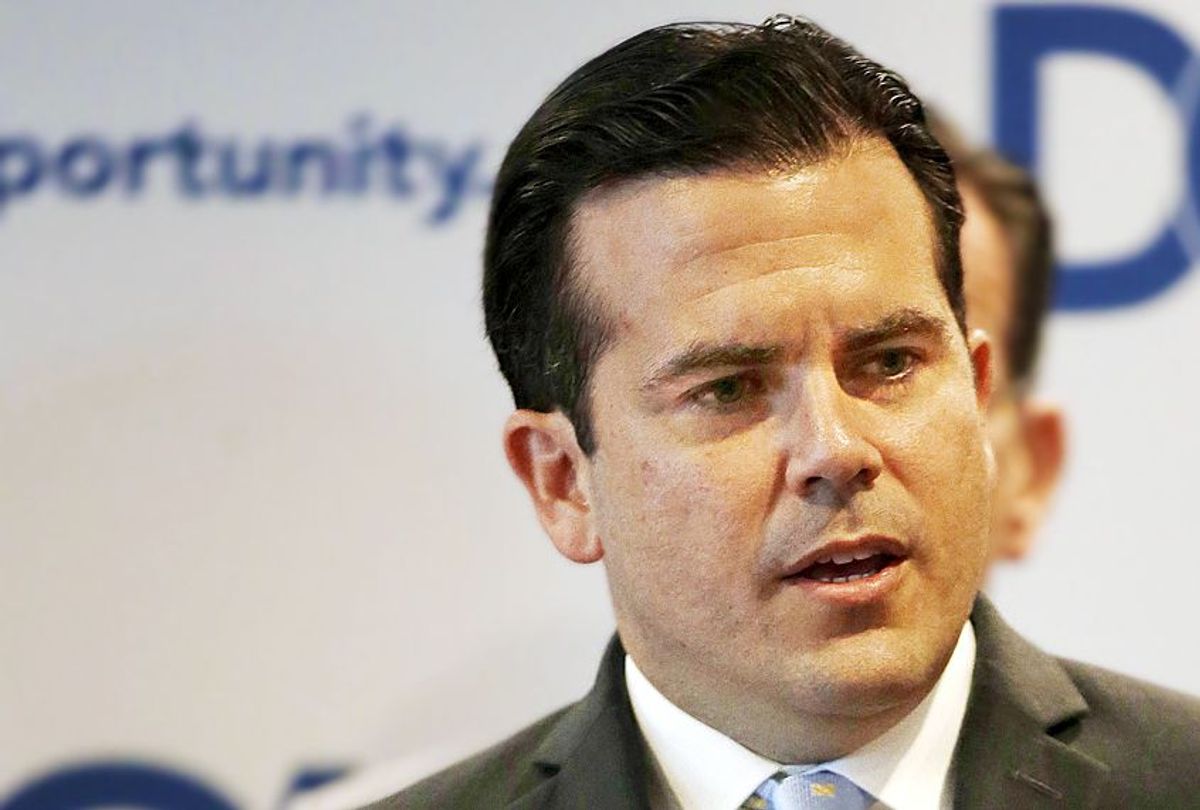 Ricardo Rosselló, the embattled governor of Puerto Rico, confirmed on Wednesday morning his intention to appoint a secretary of state before he departs office at the end of the week amid a scandal involving leaked private chats and a widening corruption probe.

"After much analysis and consideration of the best interests of our people, I have selected Pedro Pierluisi Urrutia to fill the vacancy of Secretary of State," Rosselló tweeted Wednesday morning. "To address the issue, I will be calling for an extraordinary [legislative session]."

Under the island's constitution, the secretary of state is first in line to succeed Rosselló. However, no one has been confirmed to assume the position since Luis Rivera Marín, who was part of the scandal that led to Rosselló's resignation, stepped down July 13 amid uproar.

Because there was is currently secretary of state, the next in line to take over as governor is Justice Secretary Wanda Vázquez, which Rosselló announced during his resignation message. But Vázquez, who was appointed in 2017 and is seen as a close ally of Rosselló, has said she is not interested in the top job in island politics and faces opposition from islanders who believe she is too closely linked to the scandal-plagued administration.

Puerto Rico Rep. Manuel Natal Albelo tweeted a letter he received Tuesday, stating that "members of the House of Representatives of Puerto Rico will be summoned to an Extraordinary Session."

"It is anticipated that the matter to be discussed will be the appointment of the Secretary of State but the person is not identified," Natal added. "This is not normal."

On Wednesday morning, Rosselló confirmed via Twitter that an extraordinary legislative session was called in order to confirm Pierluisi as Puerto Rico's new secretary of state. The session is scheduled just four hours before Rosselló is set to resign.

If the House and Senate approved the nomination, Pierluisi would become Puerto Rico's next governor after Rosselló resigns in disgrace Friday after nearly two weeks of massive protests across the island.

Some members of the island's Congress have said they will vote against Pierluisi's nomination, in part because he works for a law firm representing the federal control board overseeing the island's finances. Pierluisi's brother-in-law also heads the board, the Associated Press (AP) reported Wednesday.

However, Pierluisi was on a leave of absence from the firm as of July 30, 2019, according to the law firm's website.

In a recent tweet, Pierluisi said the firm's rules did not allow him to speak or grant interviews.

Puerto Rico "is living unprecedented moments, but I trust we will come out ahead," he wrote. "My heart is with every Puerto Rican but the rules of the firm where I work do not allow me to speak or grant interviews."

In a Facebook post on Wednesday, Pierluisi wrote: "I have listened to the people's messages, their demonstrations, their demands and their concerns. And in this new challenge in my life, I will only answer to the people."

Pierluisi had previously served as secretary of justice in the administration of Rosselló's father, Pedro Rosselló, back in the 1990s. He ran against Gov. Ricardo Rosselló in the 2016 primaries of the New Progressive Party and lost. He also served as Puerto Rico's non-voting member of Congress between 2009 and 2017, under the administrations of Govs. Luis Fortuño and Alejandro García Padilla. He also served as president of the New Progressive Party in 2013.

Pierluisi's appointment comes after hundreds of thousands of Puerto Ricans protested for nearly two weeks amid a corruption scandal involving former members of Rosselló's administration and the leaks of 889 pages of profanity-laced, homophobic and sexist private chat messages exchanged between the governor and members of his inner circle.

Rosselló is the first governor to step down in the history of Puerto Rico. His resignation came after Carlos Méndez Núñez, the leader of the island’s House of Representatives, said last week that an impeachment inquiry by three attorneys unanimously concluded there were legal grounds to begin the process to remove the governor.

More than half a million people took to the streets of San Juan and across one of the island's main highways, waving the Puerto Rican flag, banging pots and pans and chanting "Ricky, renuncia!" (Ricky, resign!). The protest was the island's largest in recent history.