Round 2 of the Democratic presidential debates packaged policy contrasts into flashy conflicts. The winner: Not us! 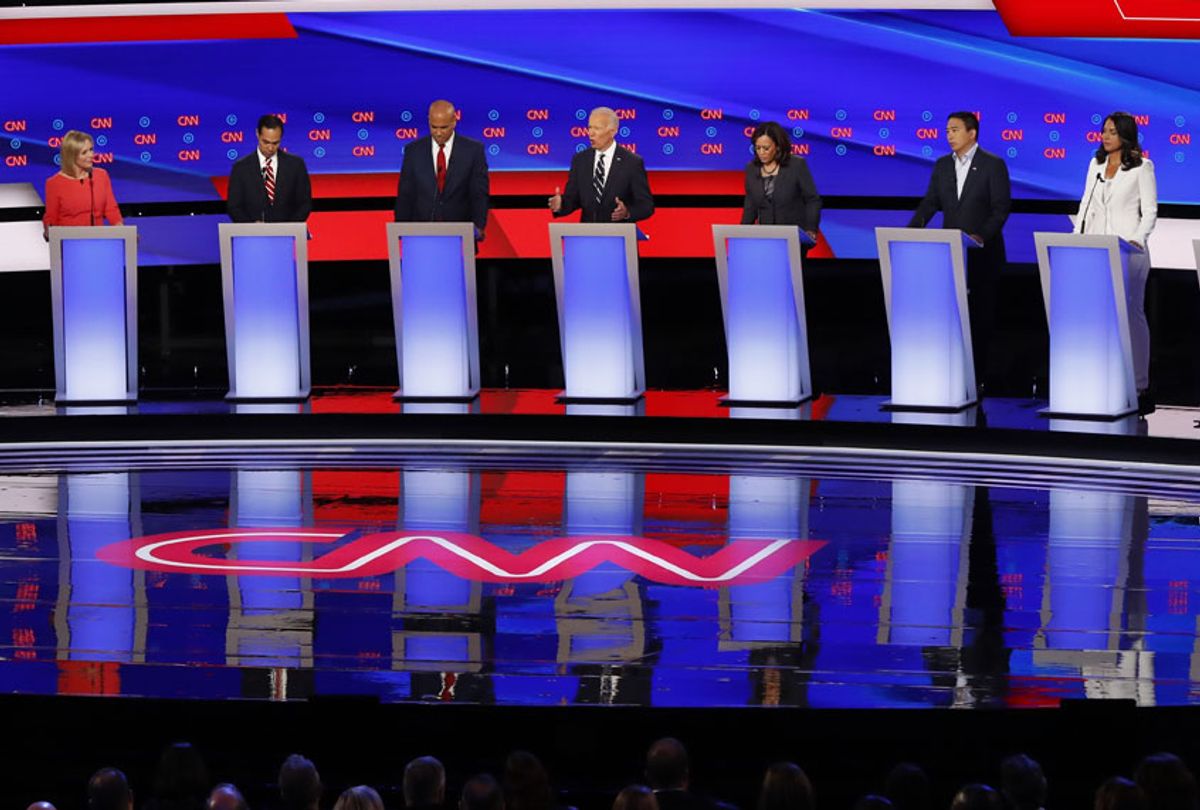 With any luck, two nights of 10-way televised debates will be one of those singular oddities we’ll all look back on some day and agree was a terrible idea. Defenders of the democratic ideal would still argue that this is how the process should work, that this provides voters the opportunity to hear as many diverse voices and ideas as possible on the way to the main primaries.

If only the moderators on CNN and NBC had the wherewithal to effectively wrangle aggressive herds of politicians angling for attention into an orderly pageant of contrasting policies and plans.

NBC’s rodeo days at the Democratic Presidential Debates in late June have been amply examined and critiqued already, from the weird “raise your hand” polls to Chuck Todd finding a way to make a portion of the proceedings about Chuck Todd.  That should have given CNN a blueprint to improve upon.

Instead CNN, as CNN is apt to do, pushed the staging at the historic Fox Theater in Detroit toward louder, sportscast-style bombast predicated on conflict, styling the proceedings as a fight-night free-for-all as opposed to a structured discussion.

The evenings opened with the appropriate patriotic pomp, with rousing performances of the National Anthem and candidates stiffly smiling, hands to hearts for the camera. This was followed by a commercial break that in turn was followed by, heaven help us, forgettable, time-consuming opening statements.

Moderators Jake Tapper, Don Lemon and Dana Bash strove to maintain a strict (overly so on Tuesday) adherence to keeping candidates within their speaking allotments of one minute to answer questions, 30 seconds for responses and rebuttals, and 15 additional seconds to respond to a moderator’s request for clarification.

Tapper explained that he, Bash and Lemon were there to ensure a fair debate and to attempt to guide the discussion, although this manifested on Tuesday in a clumsy reach for efficiency as moderators spoke over candidates before they could finish their statements and breezed by answers that could have used more examination.

Nor did the moderators’ approach necessarily result in an economic runtime for either debate. By the time CNN tied a bow on Tuesday night’s telecast, it had run a full two hours and 43 minutes. Wednesday’s debate was even longer, ending at two hours and 47 minutes. That’s only slightly shorter than “Avengers: Endgame,” a crowded battle royale, but one which people voluntarily and enthusiastically paid money to see.

Not to mention that by Wednesday night, Tapper’s reading of the rules of engagement might have elicited a short and a hearty “best of luck,” given how better prepared the candidates were to deal with the CNN trio’s blunt efforts to cut them off mid-response.

Tapper and the rest also seemed to loosen up a bit on Wednesday, or maybe they just submitted to the relentless verbal pounding beyond time limits California Sen. Kamala Harris and others delivered again and again. She and other Wednesday night contenders circumvented CNN’s restrictive methods in other ways too, such as by mounting specifically directed attacks — most of them directed at former Vice President Joe Biden — in order to force a counterattack.

Nevertheless, Harris took a beating last night on her record as California’s attorney general, delivered by Hawaii congresswoman Tulsi Gabbard, who brought up her history of jailing people over marijuana violations and keeping inmates in prison beyond their sentences to use them as cheap labor. Harris’s failure to counter those attacks damaged her standing in the polls, but at least her drubbing didn’t come with a catchphrase like the one New Jersey Sen. Cory Booker hurled at Biden when the former veep attempted to bring attention to corruption in Newark’s police department when Booker was Mayor.

“Mr. Vice President, there's a saying in my community,” Booker responded. “You're dipping into the Kool-Aid and you don't even know the flavor.”

Notice that little of what has been discussed so far ventures into the specifics of how well each candidate explained or defended their positions on climate change, the topic CNN viewers wanted to hear about the most according to the cable news network’s own poll, followed by the economy and health care.

Viewers did hear arguments about the proposed health care plans candidates are putting forward, but mostly and mainly the argument portions of it; the numerical contrasts frequently descended into meaninglessness for everybody but the policy wonks.

A debate at its best communicates a variation of ideas, arguing their merits and how well they mesh with reality. Conflict is inevitable and a spice for the audience bearing witness, but what benefits viewers is to weigh effectiveness of one position in comparison to another. That’s why the format is classically employed as a means of evaluating leadership ability.

But a fight is an altogether disparate concept. A fight implies some bloodletting and the fog of landing blows in battle as opposed to facilitating a person’s efforts to slice through spectacle and persuasively make the case for his or her candidacy.

Politics is often likened to sport, and sports are an adrenaline-fueled business that runs on sweat and clashes and screaming. The news is dominated by raised voices and nonsense seeded, watered and fertilized by the reality TV host occupying the Oval Office. And as quaint as this may sound, maybe the answer isn’t staging bout after bellowing bout to determine who gets to yell back at the yeller-in-chief in the early fall of 2020.

Save for the instances of a double K.O., fights typically result in winners, but nobody walks away unscathed.

And this is what the event’s Voice of CNN promised viewers: “a fight for the heart of the Democratic party” on Tuesday and a “critical rematch” between Harris and Biden on Wednesday.

The moderators designed questions and pulled in responses from all over the debate stage, partly in an effort to even out speaking time among candidates, but also to thrill Twitter and viewers at home and drum up applause from the Detroit audience. Take the moment Lemon attempted to frame former Secretary of Housing and Urban Development Julián Castro’s immigration policy as welcoming “open borders.”

“Open borders is a right-wing talking point, and frankly I'm disappointed that some folks, including some folks on this stage, have taken the bait,” Castro gamely replied. And he wasn’t alone in pointing out CNN’s leading — some might say goading — lines of questioning. On Tuesday night Massachusetts Sen. Elizabeth Warren and Vermont Sen. Bernie Sanders each called the moderators on asking questions predicated on Republican talking points.

In Wednesday's debate Booker countered Bash’s query about his support for a plan that she points out would pull private insurance from millions of Americans.

“The person that's enjoying this debate most right now is Donald Trump, as we pit Democrats against each other, while he is working right now to take away Americans' health care,” Booker said.

And Wednesday’s candidates weren’t the only ones to push back against bad format choices like this. When asked about raising his hand on a border security issue in previous debates, Indiana mayor Pete Buttigieg pointed out, “These ‘show of hands’ are exactly what is wrong with the way that this race is being covered,” he said.

“Well, we’re not doing that here,” Bash replied. And it’s true, CNN didn’t do that. But it didn’t do much of anything that was remarkably better.

An empathetic person viewing CNN and other news organizations bravely wading into the churning rapids of these multi-candidate pile-ups must appreciate the challenge. In the aftermath of the Miami debates, other news organizations analyzed which candidates seized the greatest amount of time talking, either by presenting their answers or stealing time away from rivals to rebut their statements or defend themselves.

However, this ignores that the reason the seven contenders likely moving forward to the September debates — Biden, Harris, Booker, Buttigieg, Warren, Sanders, and former Texas representative Beto O’Rourke — are at the front of the pack because they know how to gain the mic and the camera’s attention.

Regardless of Washington Gov. Jay Inslee’s devotion to climate change and his stated commitment to racial and gender equity in Wednesday night’s debate, he and others aren’t the most commanding voices in the room or the loudest. (Sanders would win that prize regardless of the forum.) As for the frontrunners, there’s very little that can be done to hem them in, and the most engaged viewers probably wouldn’t want to.

What we did and do want is to hear them present their plans and defend their policy positions as stated and voted upon, and the CNN devotion to order prevented that from effectively occurring, especially during Tuesday’s debate.

A few contenders blasted through the cacophony nevertheless, with New Jersey Sen. Cory Booker playing to the crowd by busting out that Kool-Aid line to embarrass Biden, or Castro pulling off his own zinger about being aware of history. Yang also broke through as did Marianne Williamson on Tuesday,

Nevertheless, when all was calculated, the general consensus is that the winner of both nights was Warren. Viewing the tabulations of who spoke the most, despite CNN’s efforts to fence in the political thoroughbreds, Biden still talked the most, for 21.2 minutes total. Warren came in second with 17.9 minutes total followed very closely by Harris at 17.7 minutes, Sanders at 17.6 with Buttigieg coming in fourth at 14.4 minutes. Everyone else trailed — even Booker and New York Sen. Kirsten Gillibrand, who logged in 12.8 and 11.6 seconds each, and many others hitting somewhere in the 10-minute range and shorter.

Judging a debate solely by those numbers says very little about how well the candidates were able to substantively express their sales pitch to the American people. Biden dominated the airtime but did not perform well on Wednesday. Nor did Harris. Booker and Gillibrand each had good nights, according to analysts. Gabbard and Inslee weren’t even mentioned in that paragraph, but they also enjoyed their moments in the spotlight.

Tapper and company did make a good faith structural effort to give each candidate equal time to cogently frame every statement and rebuttal with meaning as well as force. But what the numeric results acknowledge is that not every candidate has a strong enough position or presentation skill to make their case to the American people.

One hopes future moderators can learn from CNN’s stumbling, and maybe strike a balance between managing candidate’s runaway responses and calling on standard interviewing skills by allowing five more seconds to clarify a point. It’s irritating enough for viewers to parse through contenders talking over one another. It’s even worse when moderators do it.

Fights and rematches have the potential to create electrically-charged event programming — potential not entirely realized on either of these nights — but they aren’t especially clarifying for those of us watching and deciding from the sidelines.