Gabbard calls out Harris over her past as a prosecutor: "I'm deeply concerned about this record"

"The people who suffered under your reign as prosecutor — you owe them an apology," Gabbard tells Harris 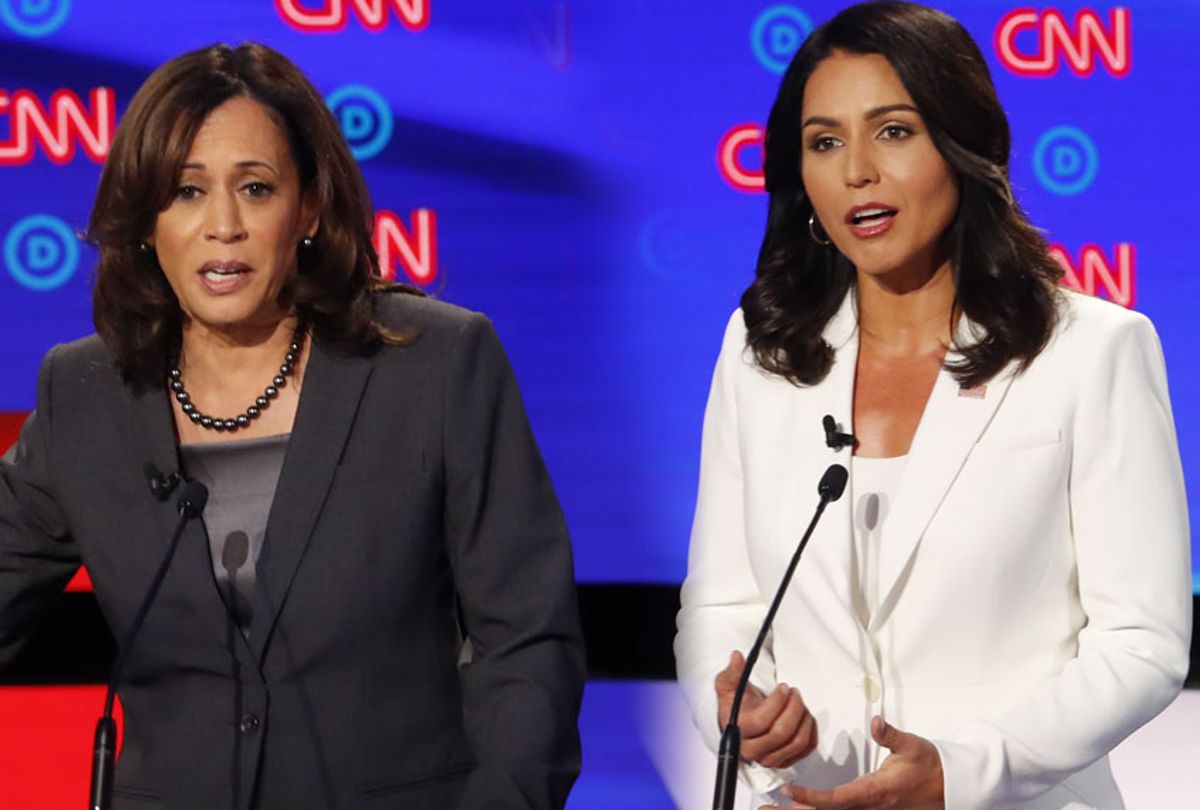 Rep. Tulsi Gabbard of Hawaii criticized Sen. Kamala Harris of California over her record as a prosecutor, calling on her to apologize to "the people who suffered under your reign" during the second round of Democratic presidential debates.

"Senator Harris, when you were in a position to make a difference and an impact in these people's lives, you did not," Gabbard told her rival for the Democratic nomination Wednesday night.

The pointed exchange began after Gabbard was asked by moderator Jake Tapper of CNN about her earlier criticisms of how Harris confronted former Vice President Joe Biden on the issue of race during the first round of debates.

"Really, what she's saying is her position is the same one she was criticizing Joe Biden for. So this is just a political ploy, and I think a very underhanded one just to try to get herself attention — to move herself up in the polls," Gabbard told CBS News. "I think that we need to be above that — all of us."

In a subsequent interview with Fox Sports Radio, Gabbard upped her criticisms, claiming that Harris was unqualified to serve as commander-in-chief.

"Kamala Harris is not qualified to serve as commander-in-chief, and I can say this from a personal perspective as a soldier. She has no background or experience in foreign policy, and she lacks the temperament that is necessary for commander-in-chief," Gabbard told the outlet.

Instead of addressing Tapper's question on Wednesday, Gabbard chose to instead confront Harris about her record as a prosecutor in the Golden State.

"I'm deeply concerned about this record," Gabbard said from the debate stage. "There are too many examples to cite, but she put over 1,500 people in jail for marijuana violations and then laughed about it when she was asked if she ever smoked marijuana. She blocked evidence that would have freed an innocent man from death row until the courts forced her to do so. She kept people in prison beyond their sentences to use them as cheap labor for the state of California."

As Tapper asked Gabbard to wrap up her comments, the congresswoman claimed that Harris also "fought to keep a bail system in place that impacts poor people in the worst kind of way."

Harris did not directly respond to Gabbard's accusations, instead claiming that she had done the work of "significantly reforming the criminal justice system of a state of 40 million people, which became a national model for the work that needs to be done."

Tapper then offered Gabbard the opportunity to respond to Harris' remarks.

"The bottom line is: Senator Harris, when you were in a position to make a difference and an impact in these people's lives, you did not," Gabbard said. "And worse yet, in the case of those who were on death row — innocent people — you actually blocked evidence from being revealed that would have freed them until you were forced to do so. There is no excuse for that. And the people who suffered under your reign as prosecutor — you owe them an apology."

Harris responded by insisting that she has personally opposed the death penalty throughout her career, adding that "when I was in the position of having to decide whether or not to seek a death penalty on cases I prosecuted, I made a very difficult decision that was not popular to not seek the death penalty. History shows that — and I am proud of those decisions."

According to Bazelon, Harris supported a law to punish parents of habitually truant children, even though it disproportionately impacted people of color; appealed a ruling that the death penalty was unconstitutional; opposed legalizing marijuana; and refused to support legislation that would have regulated how police officers wear body cameras and required her office to investigate shootings involving officers.

The law professor also wrote about criticism Harris received for allegedly withholding information about a corrupt laboratory technician working for the police:

Ms. Harris was criticized in 2010 for withholding information about a police laboratory technician who had been accused of “intentionally sabotaging” her work and stealing drugs from the lab. After a memo surfaced showing that Ms. Harris’ deputies knew about the technician’s wrongdoing and recent conviction, but failed to alert defense lawyers, a judge condemned Ms. Harris’ indifference to the systemic violation of the defendants’ constitutional rights.

Ms. Harris contested the ruling by arguing that the judge, whose husband was a defense attorney and had spoken publicly about the importance of disclosing evidence, had a conflict of interest. Ms. Harris lost. More than 600 cases handled by the corrupt technician were dismissed.