"She is playing 15,000 seat arenas in the Midwest," the Oscar winner pointed out. "They have to turn people away" 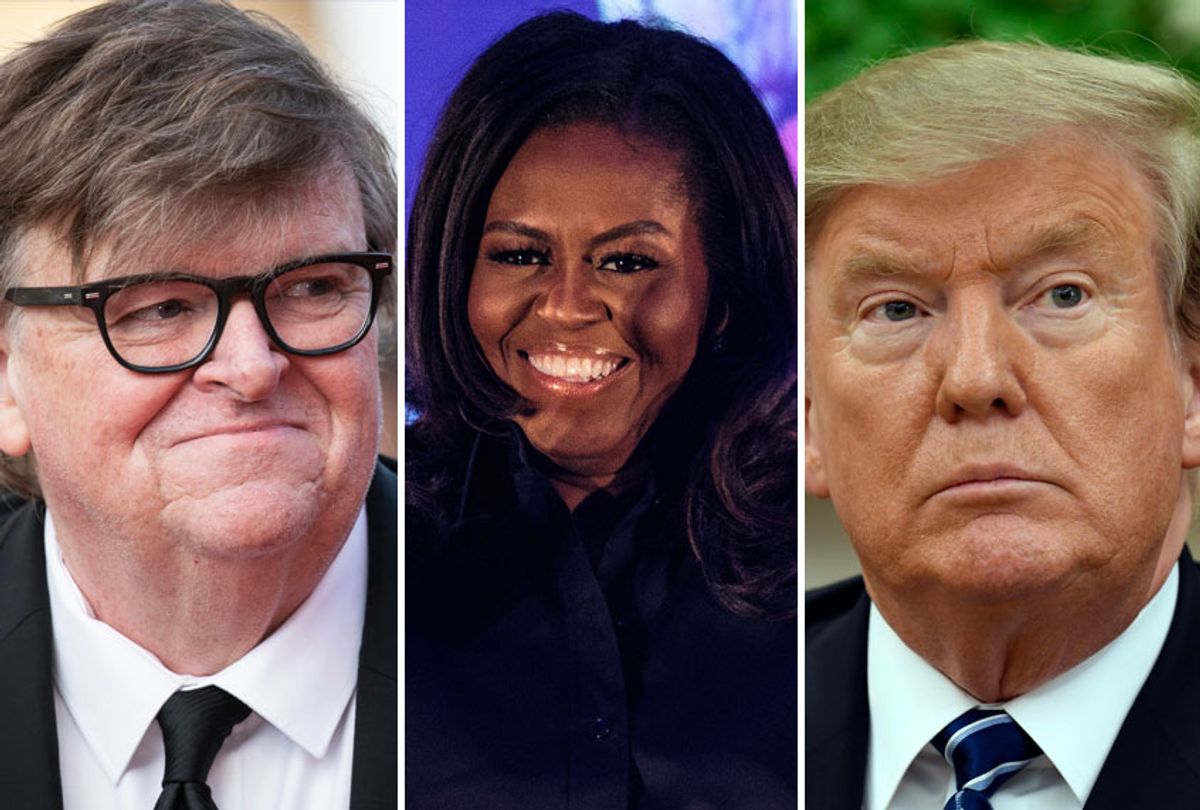 "We have to have a candidate who is beloved by the American people and who is outside the political inner circle. Somebody who's not a politician. Somebody who's going to win," Moore told Williams. "I think, in my humble opinion, four of these candidates running could beat Trump: Bernie (Sanders), (Joe) Biden, Kamala Harris and Elizabeth Warren. They could beat him."

"But Hillary beat him. It's not enough just to beat Trump," Moore continued. "The only way to remove Trump is to crush Trump."

"Frankly, I think there is a person that could do this. If the election were held today, there is one person that would crush Trump, and she hasn't announced yet," the filmmaker divined. "And her last name rhymes with Obama. In fact, it is Obama — Michelle Obama."

Moore then proceeded to argue that the former first lady's immense popularity would be an asset if she squared off against Trump in a general election.

"And she is beloved: Just go to C-Span and follow her book tour across the country," he added. "She is playing 15,000 seat arenas in the Midwest. They have to turn people away. She takes the stage, and she is so powerful and so good."

But the pugnacious pundit did not limit his recommendations to Obama's hypothetical candidacy on Thursday. Pointing to how voters turned out in record numbers to return control of the House of Representatives to the party, Moore also argued that Democrats need to impeach the president as part of their electoral stragegy.

"If they don't do anything — if they don't make it worth all the while of all those people who had sat it out in 2016 but came in 2018 to vote, they may not show up next year," he predicted. "So the Democrats have to do something. What they have to do is impeach this president."

Moore used a baseball analogy to criticize Democrats like Speaker of the House Nancy Pelosi — who he didn't mention by name — that refuse to consider impeachment in part because it would likely stall in the Senate.

In order for a president to be removed from office, two-thirds of the Senate has to support doing so; Republicans are in a majority with 53 votes, which means that at least 20 would have to defect while all 47 Democratic votes, including some independent senators who caucus with the party, would have to hold fast.

In the aftermath of former special counsel Robert Mueller's testimony on Russian meddling in the 2016 presidential election, more than half of House Democrats have come out in favor of impeaching Trump, according to Politico.

Moore also suggested that Democrats put ballot initiatives up on issues such as legalizing marijuana and outlawing partisan gerrymandering, which he argued would inspire higher voter turnout among likely Democratic voters.

You can watch the segment here via MSNBC: