Dayton shooting leaves 9 dead... and if police hadn't arrived right away, it would have been worse

A mass shooting in Dayton, Ohio left 9 dead and would have been worse if not for immediate police intervention 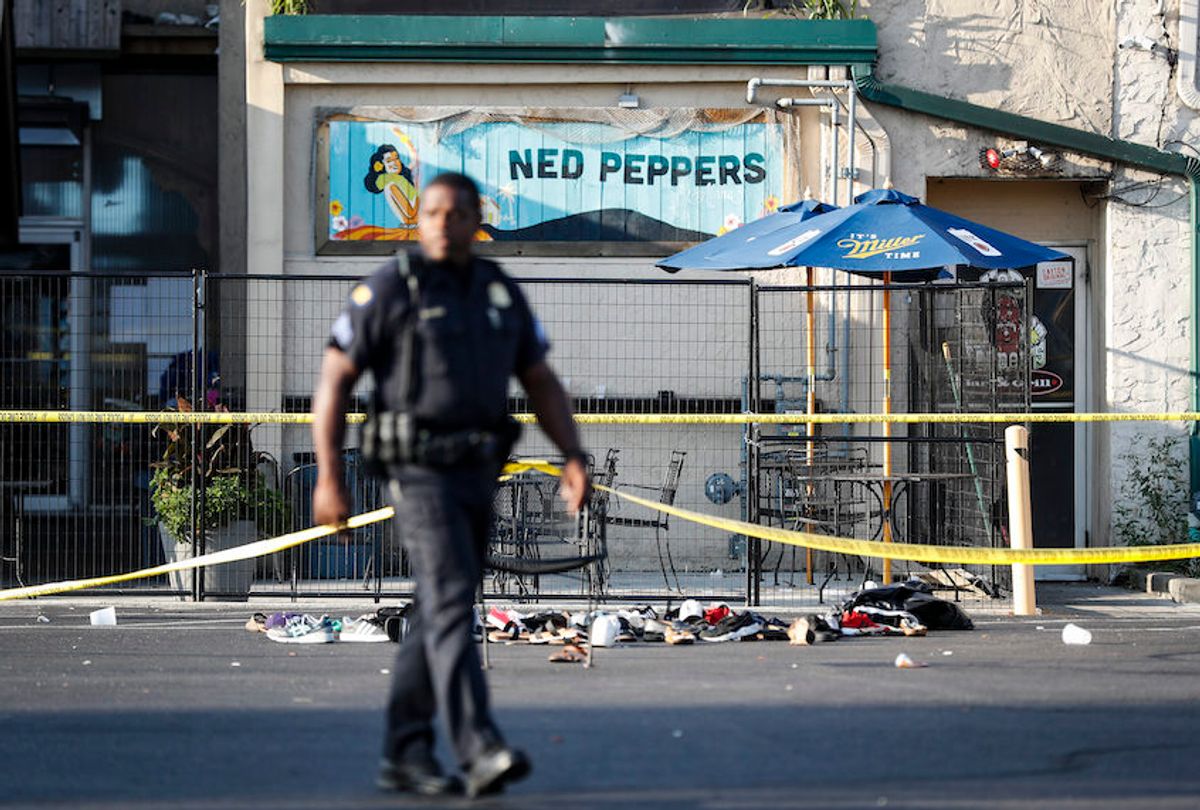 Shoes are piled outside the scene of a mass shooting including Ned Peppers bar, Sunday, Aug. 4, 2019, in Dayton, Ohio. (AP/John Minchillo)
--

Nine people were killed in a mass shooting in Dayton, Ohio on Sunday morning, and the number would have almost certainly been higher if the police hadn't intervened in less than a minute.

The shooting occurred in the Oregon District of Dayton outside a popular establishment known as the Ned Peppers bar, according to CNN. Dayton's mayor, Nan Whaley, told reporters during a news conference that the mass shooting would have been much worse if police hadn't been on the scene and responded immediately.

"The officers were there less than a minute from the beginning of the shooting. The shooter was able to kill nine people and injure 26 in less than a minute," Whaley told reporters. She added, "If we did not have police in the Oregon District... what we could have had in this city..."

Whaley was emphatic in her praise for the first responders, pointing out that on a Saturday night the Oregon District would have had thousands of people and that the death toll could have easily reached the hundreds if they had not appeared on the scene and neutralized the perpetrator right away.

"Time and again, I as mayor have been amazed by Dayton first responders. If Dayton Police hadn’t gotten to the shooter in under a minute, hundreds of people could be dead," Whaley said at a press conference.

Gov. Mike DeWine also expressed his condolences for the deceased and praised the first responders.

"Fran and I are absolutely heartbroken over the horrible attack that occurred this morning in Dayton. We join those across Ohio and this country in offering our prayers to victims and their families," DeWine said in a statement. He added, "I commend Dayton Police and other first responders for their bravery and quick response to save lives and bring an end to this tragedy."

Trump posted tweets as well expressing his condolences for the victims of the Dayton shooting. His tweets also mentioned the shooting in El Paso, which was allegedly committed by a racist opponent of Latinx immigration and which took place less than 24 hours before the mass shooting in Dayton.

"The FBI, local and state law enforcement are working together in El Paso and in Dayton, Ohio. Information is rapidly being accumulated in Dayton. Much has already be learned in El Paso. Law enforcement was very rapid in both instances. Updates will be given throughout the day!" Trump wrote in his first tweet about the Dayton shooting.

Police Lt. Matt Carper told reporters that it is too early in the investigation to determine whether the gunman had targeted any specific individual or place, and the identity of the person who was killed by police while committing this mass murder has not been released, according to The Washington Post.

Sen. Sherrod Brown, D-Ohio, responded to news of the attack by tweeting that "thoughts and prayers are not enough" and calling for stricter gun control laws.

"We are also angry — angry that shooting after shooting politicians in Washington and Columbus refuse to pass sensible gun-safety laws to protect our communities. We are still learning about the attack in Dayton and we don’t know exactly what, if anything, could have prevented this specific tragedy. But we know thoughts and prayers are not enough, we have a responsibility to act," Brown posted in a pair of tweets. "My office stands ready to assist the Dayton community with whatever is needed to investigate and recover from this attack."