Has collective desensitization eclipsed collective action as a response to mass shootings? 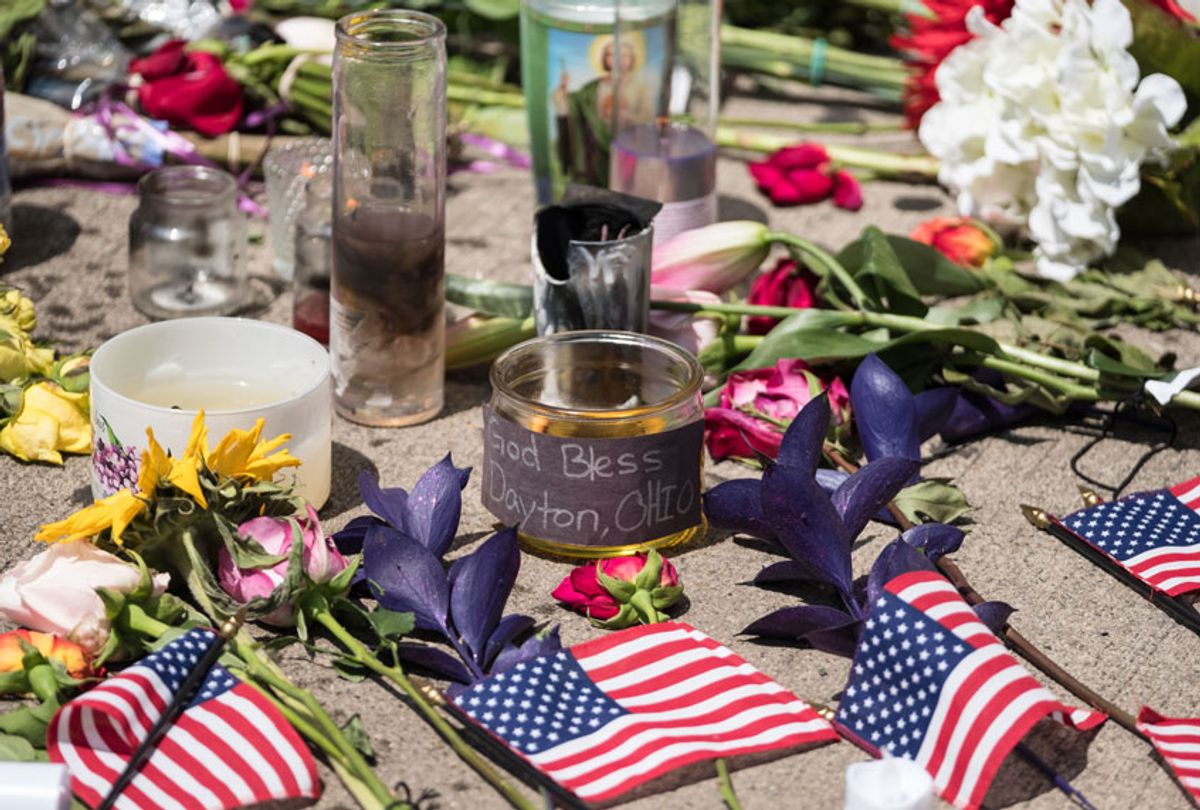 Candles and flowers a placed in front of Ned Peppers bar after the mass shooting over the weekend in Dayton, Ohio on August 5, 2019. (Getty/MEGAN JELINGER)
--

Another day in America, another mass shooting — or two.

You would think sensible gun control legislation would have been enacted after the shootings at Columbine High School 20 years ago, definitely after Sandy Hook Elementary School six years ago Certainly after the Las Vegas concert shootings, or the Pulse Nightclub shootings in Orlando, or the Marjory Stoneman Douglas High School in Parkland, Florida. Instead, at 255 (at press time), the number of mass shootings in the country is climbing without any comprehensive actions to reverse gun violence since 1993. There have been more shootings than there have been days this year. If that trend continues, 2019 will be on track to be the first year with more shootings than days since 2016. It is a  stark reminder of how desensitized to gun violence have become that the shootings at the Gilroy garlic festival, at a Walmart in El Paso, Texas and one in Dayton, Ohio eclipsed two additional mass murders in Chicago and Brooklyn last week.

We'd all like to think that with every new death, and every new shooting each day, we’d all feel greater empathy and sadness, but that is not our reality. We have seen this happen so many times, we know how it will play out. The headlines will fade, thoughts and prayers will be offered, and the news will move on to cover the next injustice or hype. These tragedies will once again come and go without any real outrage or change; then the next mass shooting will happen. As my colleague, Sophia Tesfaye, explained earlier this year after there were five shootings in five days, our ability to be distracted from these tragedies is no fault of our own: “With so many of us juggling family obligations with multiple jobs and the looming threat of crippling debt or unexpected illness hanging over us, it’s hard enough to keep up with the daily tweets from the president and the bevy of scandal from his administration.”

However, it is possible our collective desensitization in response to gun violence could be an enabler. At what point will enough really be enough? First, it is important to understand why we have become numb to mass shootings, and how it is so easy to read a headline about the death toll from another mass shooting and continue on with the day. It is not due to a lack of empathy or compassion, rather it is a coping mechanism because mass shootings have become so normal in America.

“Because these things are so overwhelming, our central nervous system basically shuts down past a point,” Dr. Bruce Harry, an associate professor of clinical psychiatry and forensic psychiatry at the University of Missouri School of Medicine, explained to Time magazine. “The things that generally overwhelm the person emotionally or neurologically are events that we’re not accustomed to dealing with: severe automobile accidents, plane crashes, fires, the death of someone close to you, or witnessing the death of anyone. These are not things we’re hardwired to endure.”

Harry said it is the brain’s way of protecting us. There is also an adapting component which does not discriminate. Humans are incredibly adaptive, so much so that we’ve been able to adapt to everyday mass violence.

“People adapt, they adjust, they try to look on the bright side,”  Charles Figley, director of the Traumatology Institute and a professor of social work at Tulane University, told The Cut after the Parkland shooting. “There are two primary methods of dealing with a traumatic event: to respond, or to put it out of your mind. That’s what’s happening now. We’re still shocked, but we watch the people in the communities where this has happened, and we see their shock, their unpreparedness. We think, ‘There is nothing they could have done.’ The more frequently this happens, the more it reminds people there’s nothing they can do, so they put it out of their minds.”

Coping mechanism or not, there is a collective consequence to this response. For example, some research has shown that exposure to violent media can make people less receptive to others’ suffering in real life. Researchers have also found that living in a violent community can compromise the ability to break the intergenerational cycle of violence. “Without large-scale interventions, a neighborhood becomes effectively unable to protect itself against the perpetuation of a culture that is normed in violence,” researchers at the Violence Policy Center wrote in a 2017 report.

The biggest consequence is that desensitization keeps us in an ongoing negative loop in which proper change is unlikely to happen. While some researchers have argued that Americans’ fears of terrorism could be misdirected, the evident desensitization appears to be doing more harm than good these days.

As Figley, of the Traumatology Institute, said: “We’ve decreased our trust in institutions, and even in the people we’re standing next to as we wait to board an aircraft. These fissures have been growing, and we have two choices: come together in a collective, coordinated response, or put it out of our minds, keep our heads down, and wait for it to happen again.”