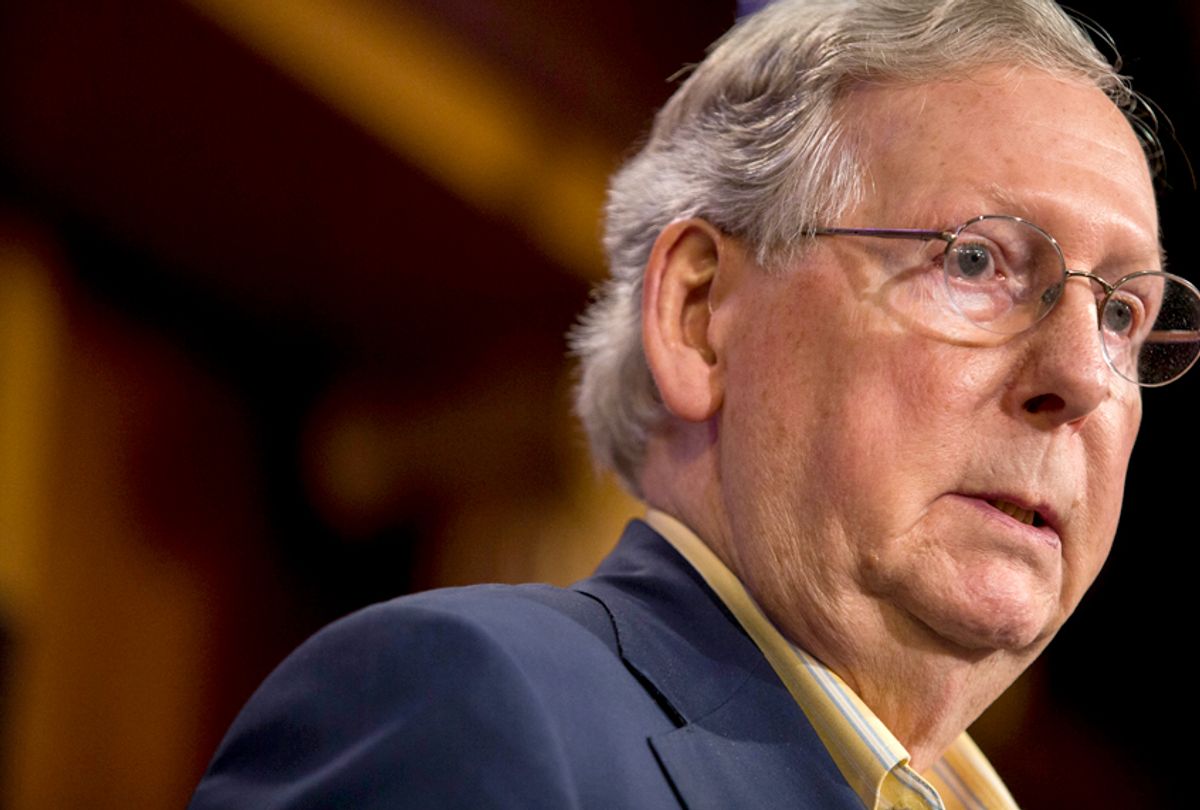 Senate Majority Leader Mitch McConnell, R-Ky., said on Monday that Republicans are prepared to "work in a bipartisan, bicameral way to address the recent mass murders which have shaken our nation," but he made no mention of any timeline to do so and did not point to the role guns play in shootings.

Democrats have called on McConnell to cancel the Senate's summer recess and reconvene the upper chamber in order to take up legislation to tighten background checks after two shootings over the weekend left at least 31 people dead in El Paso, Texas, and Dayton, Ohio. The House of Representatives passed two background check bills in February, but the Senate, which is on break until September, has thus far taken no action on them.

President Donald Trump tweeted Monday morning that "Republicans and Democrats must come together and gets strong background checks." (However, he did not elaborate on his call for stronger background checks later in the day during his televised remarks.)

McConnell issued a statement later in the day that said "Senate Republicans are prepared to do our part," but also suggested they were in no rush.

The majority leader noted that he had spoken with the heads of three different Senate committees — Judiciary Chairman Lindsey Graham of South Carolina, Commerce Chairman Roger Wicker of Mississippi and HELP Chairman Lamar Alexander of Tennessee — and "asked them to reflect on the subjects the president raised within their jurisdictions and encouraged them to engage in bipartisan discussions of potential solutions to help protect our communities without infringing on Americans’ constitutional rights."

"Only serious, bipartisan, bicameral efforts will enable us to continue this important work and produce further legislation that can pass the Senate, pass the House and earn the president's signature," McConnell said in what appeared to be a jab at the two House measures.

He also took a veiled shot at Democratic presidential candidates who have called him out for stalling earlier legislation.

"Partisan theatrics and campaign-trail rhetoric will only take us farther away from the progress all Americans deserve," McConnell, who is currently recovering from a fractured shoulder, added.

Senate Minority Leader Chuck Schumer, D-N.Y., took aim at McConnell's statement by pointing out that "there are three important letters missing from this statement from @SenateMajLdr McConnell about these awful shootings: g-u-n."

Rep. Katie Hill, D-Calif., also took a swipe at McConnell, arguing: "The House passed gun violence legislation months ago — it has been sitting on your desk since. You can start there."

McConnell, who is running for a seventh term in the upper chamber in 2020 and has closely aligned himself closely with Trump, has also come under scrutiny in recent weeks for blocking the consideration of an election security bill aimed at protecting the nation's political system against foreign attacks.

He spent Saturday in Fancy Farm, a small town in southwest Kentucky that hosts an annual political rally in which speakers from both parties address a spirited crowd. McConnell attended the Bluegrass State's signature political event, where some Democrats wore "Moscow Mitch" T-shirts adorned with the communist-era hammer and sickle symbols and others taunted him during the stump-style speaking at the picnic.

The senator fired back at his critics and likened the attacks to "modern-day McCarthyism" during a Republican breakfast on Saturday,  where he received a long standing ovation.

"It's appropriate to see a bunch of Democrats running around with communist flags on their shirts," the senator told reporters at the breakfast. "That ought to tell you something about where they want to take the country with the 'Green New Deal' and Medicare for All. Their whole agenda would fundamentally change the country with something it's never been."

"They want to turn America into a socialist country," he said Sunday at the parish picnic, as his GOP supporters cheered and Democrats booed. "Donald Trump and Mitch McConnell are never going to let that happen. That's why I call myself the 'Grim Reaper.' I'm killing their socialist agenda."