President Trump will visit El Paso and Dayton — but why isn't he visiting victims of Gilroy Garlic Festival attack? 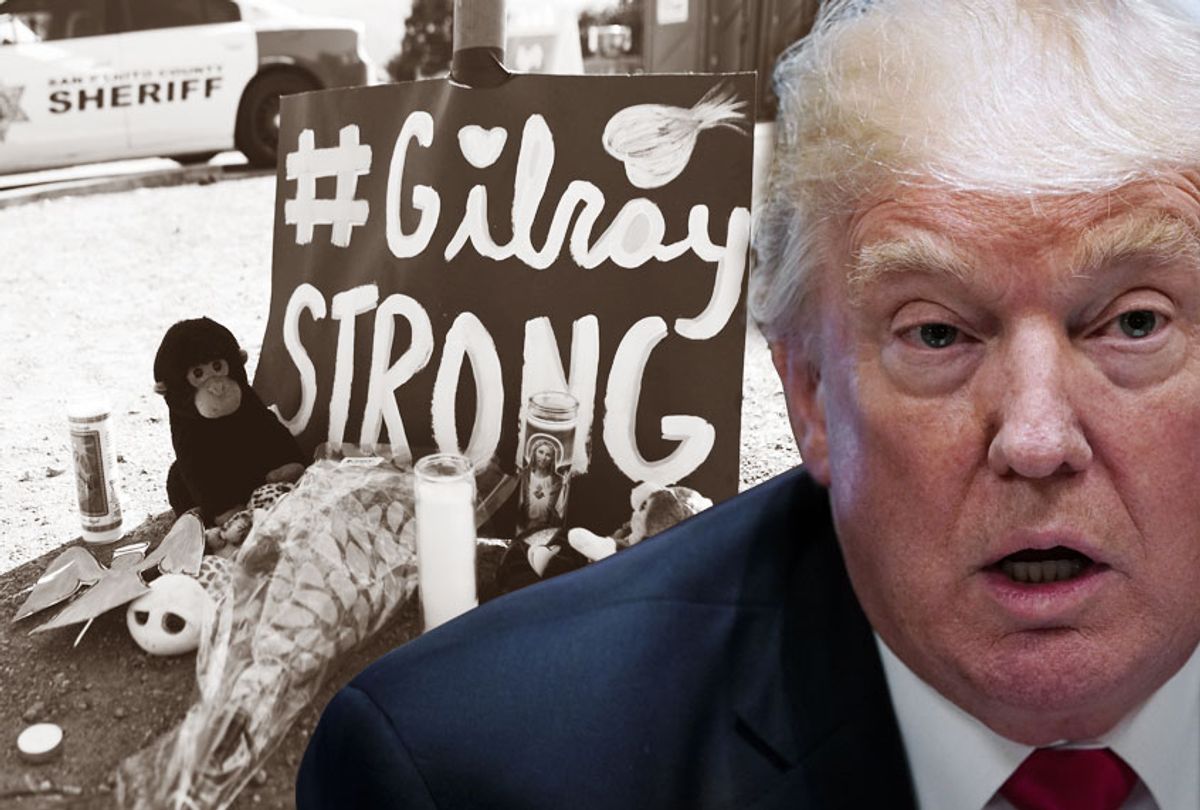 Two days after she would have turned 14, a funeral mass was held for Keyla Salazar. The middle-schooler was the first victim killed in the mass shooting at the Gilroy Garlic Festival to be laid to rest. On the same day, the FBI announced that it had opened a domestic terror investigation into the July 28 attack that left 3 people dead and more than a dozen people injured. The shooting rampage was one of three committed in one week by white, American-born young men and one of five mass shootings in seven days in America.

By week’s end, nearly three dozen Americans were fatally gunned down in attacks now being investigated by federal officials as terrorism – once again setting off the ritualistic debate over America’s gun culture and a rising wave of violent white supremacist, misogynistic violence.

The White House quickly announced that President Trump will visit El Paso, where 20 people were shot dead by a young man who drove nearly 10 hours to the border town to target Hispanic people, and Dayton, where hours later, 9 people were gunned down at a bar by a man with a history of violent threats against women. Six of the 9 killed in Ohio were African-American and one was the gunman’s own sister.

But despite a brief statement on the Monday after the shooting, Trump has not mentioned the Gilroy attack and the White House has not indicated that he has any plans to visit the victims in California. In an awkward White House speech denouncing “hate” this week, Trump failed to mention Gilroy even though authorities have indicated that the shooter, who killed himself after being confronted by armed police, appeared to be at least partially motivated by white supremacist ideology.

The ignoring of Gilroy is curious and hard to understand without cynicism. Trump won both Texas and Ohio in 2016 and relies on both states for his re-election. California is not even competitive. This conclusion is what happens when a president presents a clear empathy gap.

During a news conference last year after visiting the fire-ravaged remains of Paradise, the president referred to the California town as Pleasure. The visit came after he blamed the victims for their devastation and threatened to cut them off from aid in their time of need. "There is no reason for these massive, deadly and costly forest fires in California except that forest management is so poor," Trump tweeted. "Billions of dollars are given each year, with so many lives lost, all because of gross mismanagement of the forests. Remedy now, or no more Fed payments!"

Now the media is already covering Trump’s planned visits to El Paso and Dayton as an opportunity for him to serve as “consoler-in-chief,” but there is no indication he has the ability to fulfill the role.

Hours before visiting El Paso, where the gunman left behind a written rant outlining his violent disdain for Hispanic people in the United States, Trump attacked the city’s former congressional representative on Twitter with a specific jab at “Hispanic heritage.”

The last time the president visited the border town, he left El Paso with nearly a half-million-dollar bill. The debt remains unpaid more than six months later. President Trump’s 2020 re-election campaign also ran more than 2,000 Facebook ads calling immigration an “invasion" in the months leading up to Saturday's attack, a sentiment shared by the shooter.

"I hope that he has the self-awareness to understand that we are in pain and we are in mourning," Democratic Rep. Veronica Escobar, who represents El Paso, said ahead of Trump’s visit. "We are doing our very best in our typical beautiful El Paso way to continue to be resilient. I would ask his staff and his team to consider the fact that his words and his actions have played a role in this."

But hours later, Trump tweeted criticism of former President Obama that apparently aired on Fox News which suggested Obama had dozens of mass shootings during his "reign." A clearly defensive deflection.

In Dayton, residents are already threatening to boycott and protest Trump's visit.

“He’s made this bed and he’s got to lie in it. His rhetoric has been painful for many in our community,” Dayton Mayor Nan Whaley told reporters Tuesday, adding that she supported the planned protests against Trump.

The same thing happened to the president in the wake of another terror attack last fall at a Jewish synagogue in Pittsburgh, where hundreds of demonstrators gathered to protest Trump after a gunman left 11 people dead. The shooter in that attack was apparently motivated by a belief that Jewish people had helped plot the mass migration of Hispanic immigrants to replace the white majority in America.