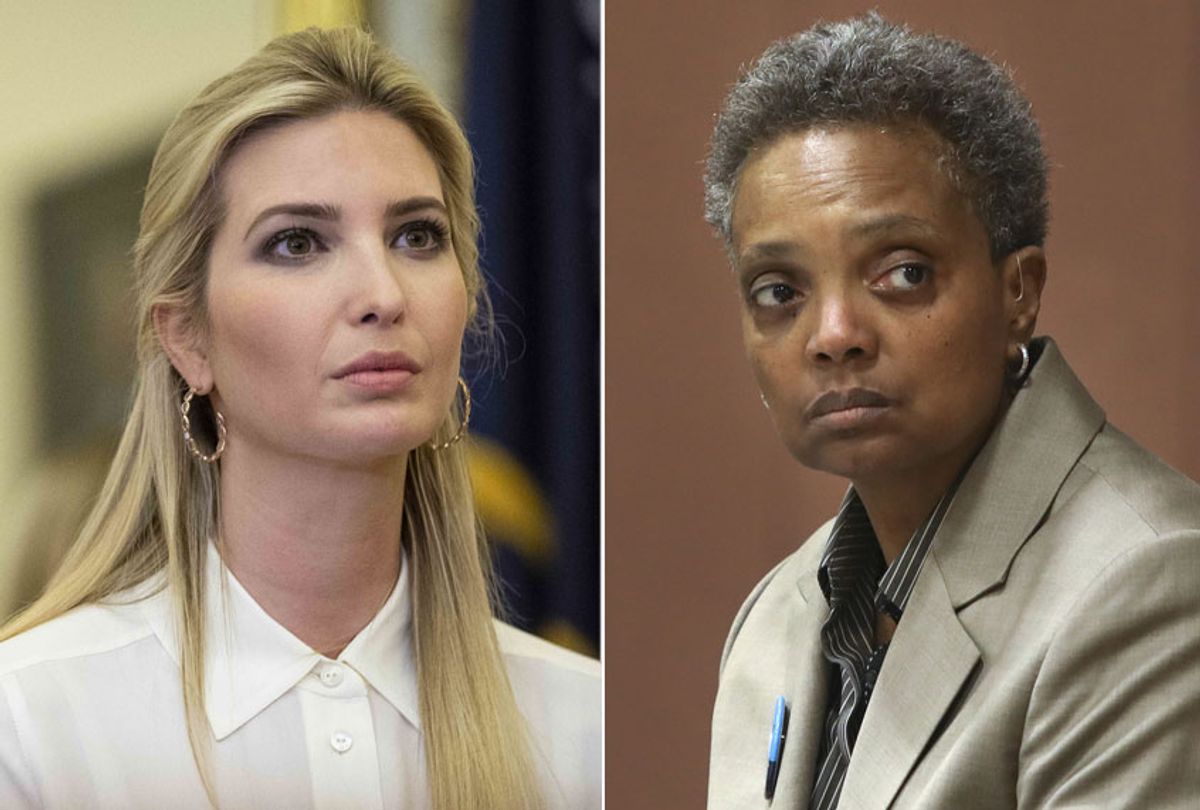 Apparently, no longer content with traveling the world on seemingly pointless missions as a shadow First Lady, Ivanka Trump has taken a more curious role in her father’s administration as of late: Clean up lady.

Despite telling Fox News shortly after her father took office that she tries to stay away from politics, Trump’s eldest daughter has gotten decidedly more political in defense of her father at the exact moment that his heated rhetoric has turned explicitly racist.

In the wake of a weekend of back to back mass shootings, Trump turned to Twitter to draw attention to another city – and got her basic facts wrong in the process.

“As we grieve over the evil mass shootings in El Paso and Dayton, let us not overlook that Chicago experienced its deadliest weekend of the year,” Trump tweeted. “With 7 dead and 52 wounded near a playground in the Windy City — and little national outrage or media coverage — we mustn’t become numb to the violence faced by inner city communities every day.”

Trump's tweet came after John Bash, the U.S. Attorney for the Western District of Texas announced that his office would be treating the shooting in El Paso as a "domestic terrorist case," noting that the attack appeared to "be designed to intimidate a civilian population, to say the least." According to writings left online, the 21-year-old gunman traveled nearly 10 hours to the border town of El Paso on a mission to murder Hispanic people in order to provoke political change that would prevent further immigration into the United States. He used language that directly mirrors the anti-immigrant rhetoric spewed by the president.

Based on Ivanka Trump’s tweet, however, it would appear an even bigger mass shooting in a major U.S. metropolis had mysteriously gone unnoticed by the entire country. But, of course, she got her numbers and other details jumbled.

First, the gun violence was citywide not “near a playground in the Windy City,” although there was a shooting where seven people were wounded by Douglas Park over the weekend. According to the Chicago Tribune, 55 people were shot in Chicago in separate incidents over the weekend, and seven of those were killed. As a result of America’s grisly gun culture, the normalization of gun violence across the country means that such horror is routinely underreported and slowly becomes more acceptable. Mass shootings, such as the type erroneously described by Ivanka Trump, however, have not yet been included in that class of normalized gun violence.

During a press conference on Tuesday, Chicago Mayor Lori Lightfoot called Trump’s tweets “nonsense” and noted that her calls to the White House have gone ignored. Before her recent inauguration as Chicago’s mayor, Lightfoot visited the White House to meet with Ivanka Trump but the budding relationship seems to have already gone cold.

A day before Trump’s tweet, Lightfoot had spoken about the president. “What he’s been doing is blowing every racist, xenophobic dog whistle. When you do that, when you blow that kind of dog whistle, animals come out,” Lightfoot said, calling on Trump to push for gun control legislation to help solve violence in her city.

In response to Lightfoot’s comment, a spokeswoman for Trump said: “Ivanka has appreciated getting to know Mayor Lightfoot, respects her commitment to addressing this issue and looks forward to continuing the conversation around this issue, workforce development and economic opportunity for all." She continued: "To the extent that her quote was misleading in implying that all of the shooting incidents occurred in one location, it remains important to note that there were 7 deaths and 52 wounded across the city, resulting in one of the deadliest weekends in the city this year. Her point remains the same, we cannot ignore the gun violence that happens in cities across this country on a daily basis.”

Her response reveals how racist the canard of Chicago crime is when invoked by Republicans looking for a convenient deflection. Because saying “inner-city crime” or “inner-city violence” is now widely seen as a dog whistle for “black,” the Trump administration has turned to “Chicago” instead to convey the same sentiments.

“Seven people shot and killed yesterday in Chicago. What is going on there - totally out of control. Chicago needs help!” Trump tweeted in February of 2017. In June of that year, he tweeted, “Crime and killings in Chicago have reached such epidemic proportions that I am sending in Federal help. 1714 shootings in Chicago this year!”

But as the Chicago police noted at the time, they asked for help from the Trump administration and were ignored.

“We’ve made requests to the White House and the Justice Department for them to support our work — from increasing federal gun prosecution to more FBI, DEA and ATF agents to more funding for mentoring, job training and more,” Chicago Police Superintendent Eddie Johnson said in a statement. “The mayor made the request in person as recently as last week and we are hopeful the administration will finally respond.”

Ignorant tweeting seems to be a family pastime.

There’s a reason Trump and his administration constantly point to Chicago, specifically, even though it doesn’t even rank in the top 20 cities for homicides per capita. It’s a liberal bastion with a large population of black residents and the hometown of Barack Obama. The right-wing has demonized Chicago for over 100 years, beginning with the press coverage of criminal figures like Al Capone. That quickly morphed into a narrative that black people are violent and killing themselves during the Civil Rights movement and now a perversive gawking at Chicago’s continued gun violence.

"I encourage everyone to advance smart policy and/or support organizations that uplift the great people of 'Charm City,' " she tweeted.

She made no mention, however, of her father’s dehumanizing attack on the people of Baltimore or a veteran black lawmaker.

Ivanka Trump’s clean-up job following her father’s overtly racist attacks on two great American cities this summer shows her to be fully immersed in the worst aspects of his administration and represents a point of no return for her reputation.