Private Israeli spacecraft may have contaminated the Moon 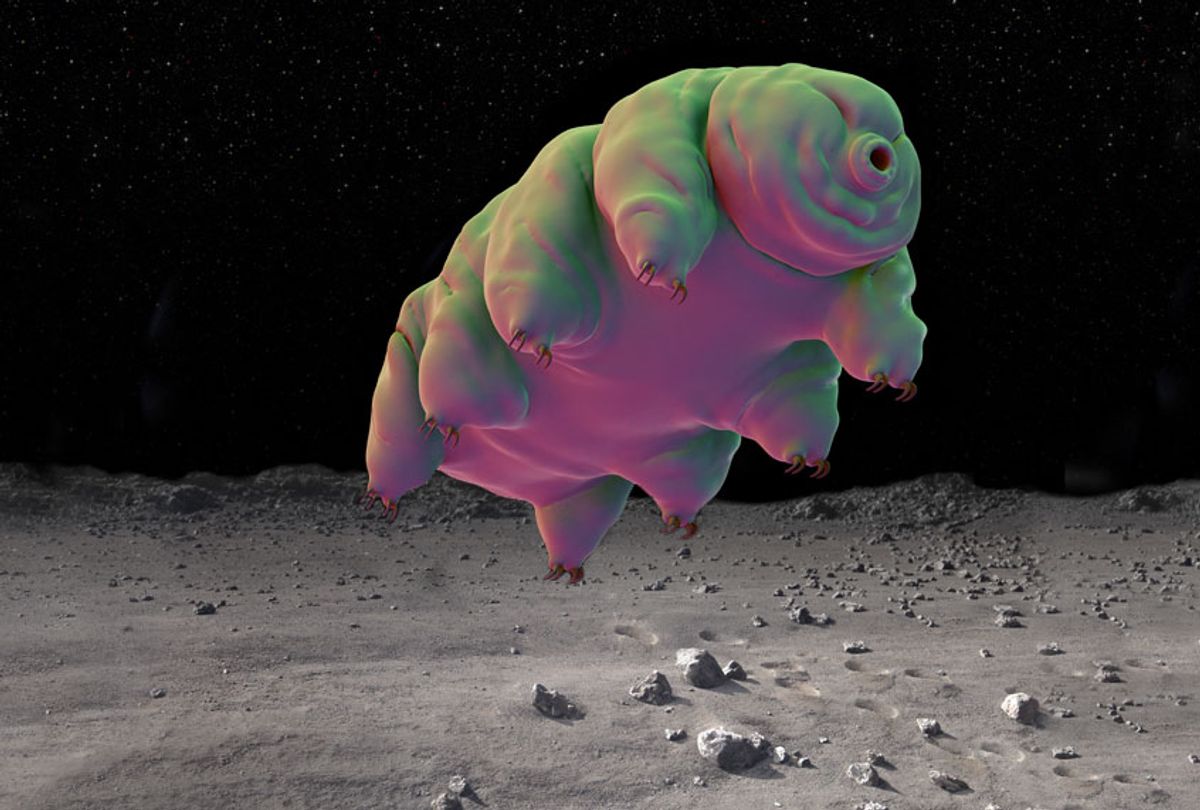 Enlarged tardigrade on the moon (Getty/Photo Montage by Salon)
--

The moon is littered with human artifacts, remnants of previous missions. For example, there are more than 100 items in the Sea of Tranquility, which includes shovels, rakes, television cameras, a plaque, human waste and more. International agreements require government agencies to be careful to thoroughly sterilize anything that goes into space or to another world, though, in order to prevent contamination of pristine worlds.

Unfortunately, because of the crash of an Israeli lander in April, it is possible that an Earth organism has contaminated the moon: dehydrated tardigrades, the microscopic animals commonly called "water bears.” Such contamination could negatively affect future astroarchaeologists or astrobiologists working on the Moon.

Water bears are known for their resilience, and their ability to survive in harsh conditions that are lethal to other forms of life. They got their name because they look like microscopic bears with their plump tiny bodies and stubby legs.

The spacecraft was slated to be the first private spacecraft to land on the moon, landing in the Sea of Serenity, and was to deposit a digital time capsule that included a "starter guide" to humanity: DNA samples, thousands of books in a DVD-sized nickel digital archive which included textbooks, and water bears. When the spacecraft crashed, Nova Spivack, who founded the Arch Mission Foundation, a nonprofit whose goal is to create “a backup of planet Earth,” wondered if he had just littered the moon’s surface with water bears.

“For the first 24 hours we were just in shock,” Spivack told Wired. “We sort of expected that it would be successful. We knew there were risks but we didn’t think the risks were that significant.”

The purpose of storing the digital archive on the moon, Spivack says, is to preserve humanity’s heritage and biology in case something seriously goes wrong.

“Our job, as the hard backup of this planet, is to make sure that we protect our heritage — both our knowledge and our biology,” Spivack said. “We have to sort of plan for the worst.”

But what happens when that mission doesn’t work out? According to Wired, it is still unknown if the digital archives, DNA samples or tardigrades are intact. However, if the tardigrades are, there is little reason to worry. Since they are dehydrated, they would have to be brought back to Earth to be rehydrated.

This is also not the first archive to be sent into space. The Arch Mission Foundation sent its first one in the glove department of Elon Musk’s Tesla, when he launched his $100,000 Tesla Roadster on the SpaceX Falcon Heavy rocket in 2018.  SpaceX never clarified if that car was sterilized before being sent into space, though experts say the evidence suggests not (heat sterilization would melt many of the car's parts, and they appeared intact).

These types of private missions that are creating a sense of urgency for researchers on Earth to preserve moon debris, and study how the debris has changed over the years.

“We want the contamination as it is now, not with new contaminants introduced,” Mark Lupisella, an exploration research and development manager at Goddard Space Flight Center, told Salon last month.

When asked if the contaminants — not including the water bears — are affecting the lunar surface in a negative way, Lupisella said NASA is concerned, but it is not a priority.

“It is not exactly at the forefront, but I have had a number of conversations with people trying to do more on that front,” he told Salon.