Musk could have used his wealth and fame to aid STEM ed or advance science. Instead, he sent a monument to his ego 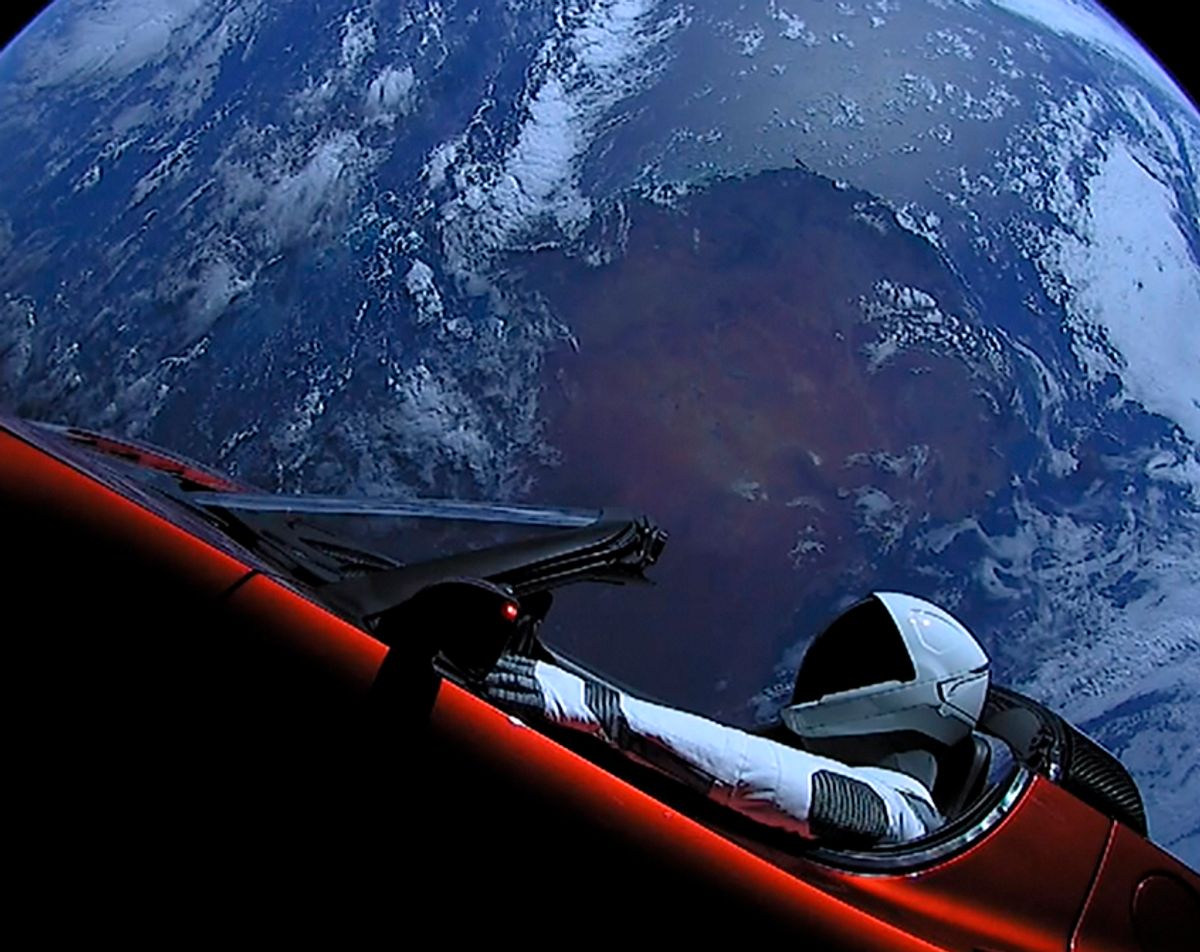 A Tesla roadster launched from the Falcon Heavy rocket with a dummy driver named "Starman" heads towards Mars. (Gett/SpaceX)
--

Every power-hungry titan in history has had dreams of immortality. This has never been practically achieved — only metaphorically. From the pharaohs to the numerous libraries funded by Andrew Carnegie to the many, many universities and hospitals named for their donors, it’s a general rule that when you reach a certain amount of wealth and power, the best way to ensure your name lives on in perpetuity is to slap it on a building, monument or foundation.

This tangent about philanthropy is more relevant to Elon Musk’s recent car-launching stunt than it might seem. The Mark Zuckerbergs and Bill Gateses of the world achieve existential immortality by hoodwinking us with their faux-charity, attaching their names to nonprofit institutions or scholarship funds. This in turn gives them fuel to avoid taxation and hide their money — after all, if they’re “doing good” in other ways, they must be good people and therefore don’t deserve to get taxed.

In the same manner, Musk has achieved a comparable kind of immortality: the record-book feat of sending a luxury car into space, to orbit the sun for eternity. Long after Tesla stock collapses, long after SpaceX is nationalized out of existence, long after the “Zuckerberg” in Zuckerberg San Francisco General Hospital is displaced by another trillionaire donor’s name, the Tesla will keep on circling the sun.

Yet the true hubris of the car-launching stunt lies in how little respect it shows for real science and science education.  Sending something into orbit is a phenomenally expensive ordeal; even sending equipment to low-Earth orbit — barely above the mesosphere  — hovers between $9,000 per pound and $43,000 per pound, according to one estimate. Sending cargo further out — say, scientific instruments —  is far more expensive; as such, the cost of sending a satellite of comparable weight into the orbit Musk's Tesla now occupies would be in the eight- to nine-figure range. Many astronomers spend years submitting proposals to get their 10-pound instrument attached to a probe, and often get denied again and again.

"This is basically the criticism a lot of scientists have" of the Tesla launch, said Jill Scudder, a physics professor at Oberlin College who publishes a science outreach blog called Astroquizzical. "Why not send a whole fleet of CubeSats [small cubical satellites] or something?"

Musk could have reached out to the scientific community to put something of scientific or educational value on the Falcon Heavy rocket, but didn’t. NASA confirmed as much in a comment to a GeekWire reporter. Or Musk and company could have sent a few kids' science experiments along in the passenger seat; they sent an advertisement for a union-busting billionaire's car company instead.

This might seem a minor quibble: after all, test flights normally send ballast weights, rather than important or valuable payloads. One might argue that there was no prerogative to send anything of value, per se, to which one might respond: why, then, pollute space with an advertisement rather than send a sack of lead?

There is another, more damning issue swirling around SpaceX's launch, one that speaks to a deeper enmity towards science: Was the Tesla sterilized prior to launch? Spreading living organisms around the solar system unintentionally is a huge risk that every space agency on Earth attempts to avoid at all costs. Both Scudder and Jason Davis (writing in the Planetary Society's blog) have expressed concerns about this. "That worries me about the car," Scudder told Salon.

She added that she hadn't seen any confirmation that the car was sterilized prior to launch; I could find no evidence of that either. Indeed, the car seats didn't look melted, as they likely would if it had been sterilized the normal way satellites are, via heat. (Salon reached out to SpaceX for comment, and did not receive a response prior to publication.) "Planetary protection policies say you should bake your spacecraft to stave off bacteria," Scudder said, "in case it crashes into something that maybe has the capacity for life, or something that could end up somewhere with the capacity for life."

Scudder was particularly concerned with contingencies. The launch was successful and Musk's Tesla satellite is now in an orbit that's unlikely to crash it into Mars, but there were no guarantees of that in advance. If something had gone wrong with the launch, the car could easily have contaminated a body in the solar system with pesky Earth microbes, a result that would have infuriated actual scientists. In the battle between billionaire hubris and international scientific protocol, the former seems to have won out.

Indeed, we now seem to have entered a strange new era in space travel, where space is no longer a sacred realm where humans trespass only cautiously, and only on the basis that whoever does so acts on behalf of our entire species. Writing in The Atlantic, Marina Koren marvels at how Carl Sagan and a group of scientists labored over the import of what to put on Voyager's "Golden Record." In comparison, the Tesla in space feels trite. Space is no longer romantic, and far less a symbol for collective human achievement and human possibility.

I agree. Musk sending a Tesla into space is an exercise in frivolity. Just as Dwight Eisenhower once suggested we view military spending as a theft from the poor, I see random, self-promotional space junk as a theft from humanity. Compared to the important scientific tasks space travel has enabled, from planet-detection to gravity-wave observation to infrared telescopes, the $100,000 luxury car floating in the void is nothing more than a wasteful monument to billionaire stupidity. Send a lead sack, if you must, not an advertisement. Perhaps it’s a harbinger of a new era, in which space is now normalized as a rich man’s playground rather than a scientific commons. In other words, it's not even a small step for man — it's just a huge leap for Musk's already vast ego.