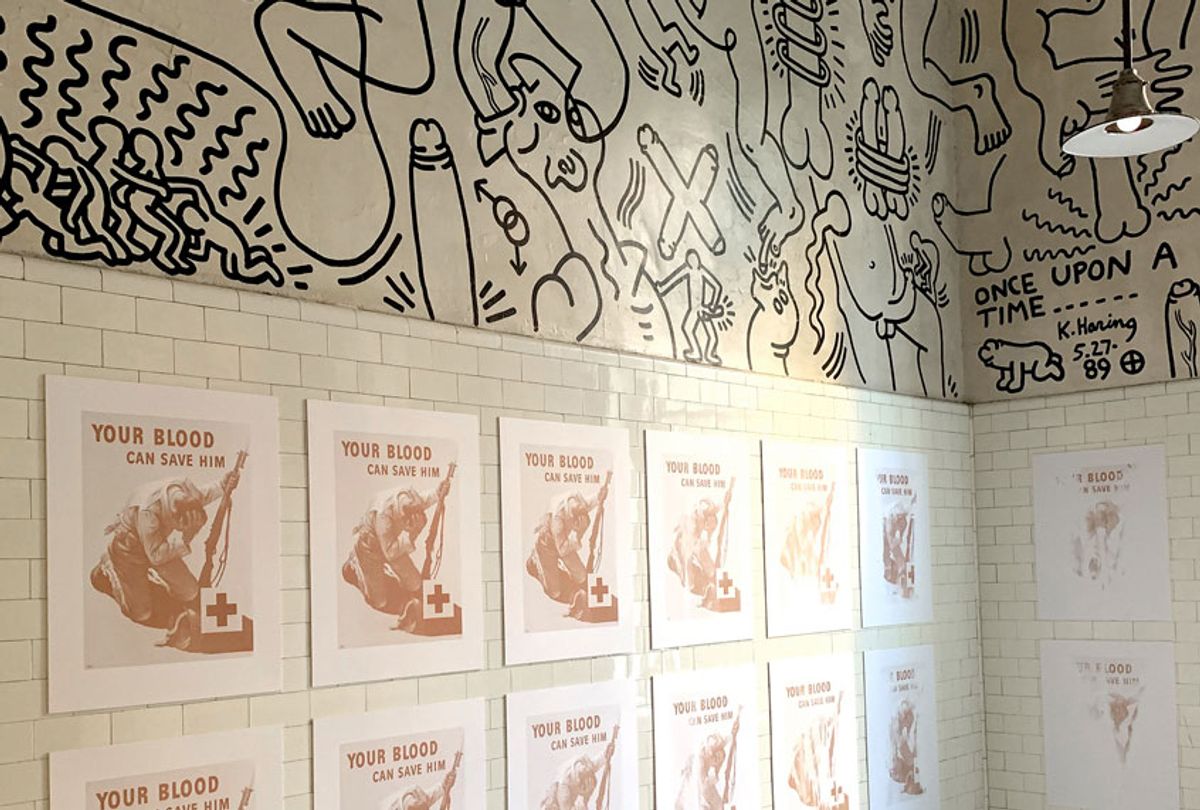 For his latest exhibition, celebrated contemporary artist Jordan Eagles used a pint of blood donated by an active-duty transgender and pansexual U.S. service member to create a new series of screen prints of an archival poster from World War II. Captioned "your blood can save him," the original 1943 image was used to convince Americans to donate their blood to save the lives of soldiers on battlefields far across the globe. At the time, race played a decisive role in who could donate blood, even though a prominent black surgeon named Dr. Charles R. Drew developed the techniques used to store the blood and plasma exported from the U.S. to Allied forced in Europe.

Eagles used every drop from the pint of donated blood to the project, continuing to create screen prints until the image faded — a nod to the ongoing discriminatory blood policies set by the FDA, which continues to prioritize stigma over science in policy decisions. Although the FDA in recent years overturned its ban on blood donations from gay and bisexual men who have sex with men, a de facto lifetime ban remains in place as perspective donors must abstain from sex for an entire year. Lifting that ban could save as many as 1 million lives each year, according to a study conducted by the UCLA Williams Institute.

The original WWII poster Eagles used is preserved in a 7-foot tall monolith that includes the medical waste used to create the series of dramatic screen prints. Encased in high-polished resin, viewers can see themselves reflected as they gaze into the contents encased inside the sculpture — an acknowledgement that the same blood runs through us all in spite of our perceived differences.

Our Blood Can Save Them is currently on display in the historic Keith Harring Bathroom at the Lesbian, Gay, Bisexual & Transgender Community Center in New York, which connects his artwork directly to the AIDS epidemic that catalyzed the gay blood ban and the ongoing fight for transgender rights unfolding as state legislators across the country weigh discriminatory bathroom bills. To mark the occasion, Eagles spoke with Salon about the dynamic qualities of his activism and art.

Salon: Tell us more about your creative process.

Eagles: I've been working with blood for more than 20 years, and I taught myself how to preserve it. Because of the medium I use, people tend to be very curious about my artistic process, the materials I use and how my works are created. Blood is an intense and sensitive material to work with — there is a palpable energy that comes from it. The methods and techniques for mark making, handling and preservation can vary drastically depending on work and the source of the blood — be it animal blood from a slaughterhouse or human blood donated from members of the LGBTQ+ community.

Whenever I’m working on a new project, I like to push boundaries while also staying connected to larger themes of equality and common humanity. In Our Blood Can Save Them, screen-printing was a completely new way for me to work with blood, and it references the printing process that was used to create the original propaganda poster from WWII. During the screen-printing, I used every last donated drop of blood. As it ran out, the image itself gradually fades, expressive of a person or communities being erased by discrimination or indifference. The sequencing of the prints and their fading also represents how I feel about America right now — wounded and in need of salvation, albeit not by the pains of war but rather the lack of equality which has been made increasingly transparent in the current political climate.

Salon: Throughout your career, you have worked with blood from slaughter houses. Your activism drew you to work with human blood. What weight does working with the blood of a transgender service member carry?

Eagles: Blood is a fascinating material for its physical and dynamic qualities, as well as its energy and symbolic power. The themes of my projects vary depending on the source of blood. Works made with animal blood from slaughterhouses address the circle of life, spirituality and regeneration. Projects created with blood donated from the LGBTQ+ community address the gay blood ban, stigma and the ongoing fight for equality. So often we think of blood in relationship to violence, but blood is also something that is used to save lives and is representative of our common humanity.

Given the source material for this project — a WWII blood donation propaganda poster — and the discriminatory issues at stake, working with blood donated from an active U.S. service member brings an intensity and authenticity to the project. The fact that many LGBTQ+ military personal are willing to shed their blood on a
battlefield in order to protect our freedom yet are unable to donate blood to save lives, or in the case of transgender service members, are under attack from our own government because of their gender identity, is not only wrong, it's counter-productive.

It is very important to call attention to the ways in which gender and sexuality are used to create policies that are not rooted in science and data, and which also undermine our country’s public health and readiness for combat, such as the FDA’s decades-old gay blood ban and the current administration's transgender military ban.

Salon: Discrimination by means of blood did not begin with the gay blood ban. In fact, it dates back to WWII, when the propaganda image you chose for your screen print would have been displayed in the U.S. Tell us more about the correlation between that cruel history and your work.

Eagles: The source material from WWII references the history of blood donation and the racial segregation of blood in the 1940s. The application of queer blood to this material asks us to re-examine our current discriminatory governmental policies and draws attention to history repeating itself. In the early 1940s, Dr. Charles R.
Drew, a prominent black surgeon, developed blood storage techniques as part of a successful program to collect blood in New York hospitals and export the plasma to the Allied forces in Europe. Dr. Drew eventually resigned his position in protest of the racial segregation of blood, which had no basis in science. The same is true for the FDA’s current discriminatory blood donation policy that essentially bans gay and bisexual men from donating blood — it also has no basis in science.

Salon: Your project was conceived before the current administration enacted a ban on transgender service in the military. What new resonance does this give it?

Eagles: Our Blood Can Save Them is part of a new, multi-chapter series of works that appropriates pop culture and historical content, pairing it with queer blood donors in order to circumvent history and put a spotlight on the current discriminatory public policies facing the LGBTQ+ community.

For this installation, a 1943 WWII propaganda poster is paired with blood donated by an active U.S. service member who identifies as a transgender and pansexual. When I began the project, there were only tweets that threatened a ban on transgender service in the military. Now, it's reality.

As viewers look at the series of screen-prints and see the images fading away, it becomes expressive of erasing the transgender community — especially as it relates to the current administration's military ban. As one sees the image of a wounded solider on his knees fading away over a series of prints, it's as though the solider is America itself, a nation in need of a healing transfusion. In this case, it's not real blood but rather the lack of equality those who are perceived to be different face.

Once a viewer understands the source and authenticity of the blood donor — a transgender, pansexual active service member — it adds additional crucial layers to the images and project about specific policy conversations of our time. An artist’s role is to document and respond to the world we live in, and these are urgent issues that need to be addressed and recorded.

Salon: Displaying your project in front of a historic Keith Haring mural ties it directly to the AIDS crisis. How does that elevate the viewing experience?

Eagles: The Keith Haring Bathroom adds additional context to the conversation. It’s an intimate and highly-charged space. Sharing this work alongside Haring’s amazing and permanent 1989 mural Once Upon A Time, which celebrates sexuality and freedom, places the installation in direct relationship to the AIDS crisis and reminds us how stigma, in all forms, still unduly influences our policy decisions decades later. Moreover, since this project also addresses issues of gender, and bathrooms have become the battlefield in the current national dialogue on gender identity, the mere fact that it’s a bathroom adds yet another dimension to this exhibition.

Salon: According to a study from the Williams Institute at UCLA, completely lifting the gay ban would save as many as 1 million lives every year. Even during the administration of a progressive Democrat, Barack Obama, the ban was not fully overturned. What do your art and the ban itself teach us about how stigma impacts public policy decisions?

Eagles: In 2015, during the second term of the Obama administration, the life-time ban was changed to an equally ludicrous one-year celibacy policy, which remains in place. The driving factor behind our policy continues to be stigma. But there are also other inadequate excuses about why the policy hasn’t changed. One reason is that the FDA seems to be unable to have open and honest conversations about sex for fear of not wanting to offend potential blood donors by asking the actual necessary and appropriate questions that would actually mitigate risk. Instead, they put policies in place that generalize and ultimately stigmatize certain groups, such as gay and bisexual men. This approach is not based in the realities of modern science.

The entire blood donation system needs to be updated in a way that accounts for modern scientific interventions and the evolving ways in which younger generations are relating to their sexuality and gender identity. As more
individuals are comfortable identifying as bisexual, pansexual, transgender, intersex, non-binary and gender non-conforming, requiring a person to identify as male or female or to declare their sexual orientation when donating blood or participating in a civic duty is already outdated.

Salon: Are you hopeful the ban will be overturned? Do you think the Democratic nominee for president in 2020 will propose overturning it?

Eagles: One must always maintain hope, otherwise what is the point of life? But to say that FDA is slow moving is an understatement.

I would hope that the next Democratic nominee for president would propose to follow the path of science — and not just related to blood donation but science as a whole, including global warming. We have so much knowledge at our disposal yet we often don’t use that information to make sound policy decisions. Stigma continues to deter us.

It would be interesting, for example, if Mayor Pete Buttigieg, who is openly gay, ends up on the Democratic ticket. What would it say if our nominee for president, or perhaps vice president, was unable to participate in the simple civic duty of donating his blood because of his marriage to another man?