We just solved a major mystery in the "Lion King" franchise

"Lion King 1½," a direct-to-video spinoff, was rumored to be based on a Tom Stoppard play. Here's the truth 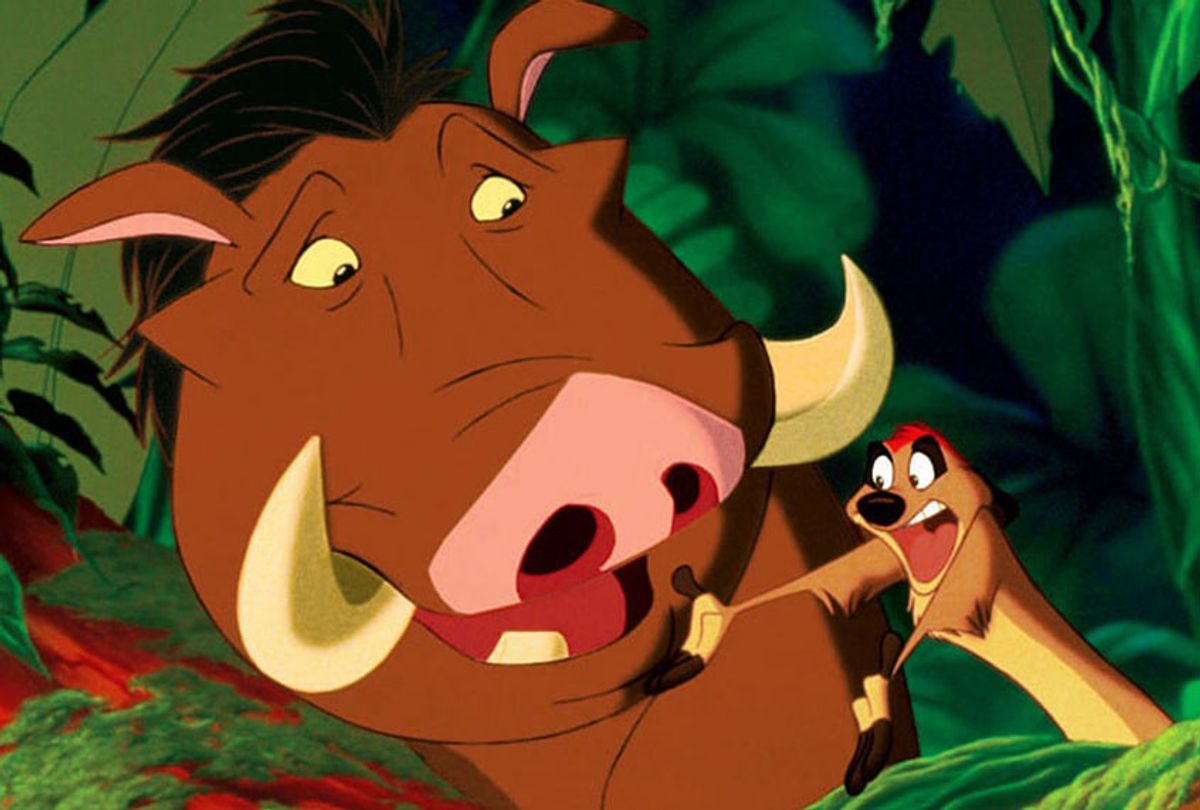 Tom Stoppard, the recondite and droll 81-year-old British playwright, and the "Lion King" franchise, billion-dollar darling of the Disney empire, are not two things you would generally sort together in the index of a dramatic encyclopedia. Yet the Tony Award–winning writer of “The Coast of Utopia” and “Arcadia” has had some weird connections to major media franchises that have only recently come to light, including the revelation that he was a ghostwriter on the screenplay for “The Revenge of the Sith,” the critically-hated third entry in the “Star Wars” prequel trilogy.

Now, a much-speculated connection between a Stoppard play and a direct-to-video “Lion King” entry has been confirmed by Salon, more than 15 years after its release.

To understand what this means, one must delve into the peculiar history of the Disney corporation itself. From the 1990s to the late 2000s, Walt Disney Studios made a business decision to produce a number of direct-to-video sequels and spinoff versions of their lucrative and critically acclaimed Disney Renaissance films. For us 1980s babies, these sequels and spinoffs were formative: I vividly recall watching the direct-to-video “Aladdin” sequel, “The Return of Jafar,” in my elementary school’s computer lab, as part of an end-of-year party for fourth graders.

Though these spinoffs were not always as high-budget nor as beautifully animated as the originals, kids of that era loved them. I was one of these kids: my cousins had all of these films on VHS, including the “Little Mermaid” sequel “The Little Mermaid II: Return to the Sea” (2000), the “Beauty and the Beast” Christmas special from 1997, and particularly “The Lion King 1 ½,” which came out in 2004.

Though at age 18, I was a little bit too old to fully appreciate “The Lion King 1 ½” when it came out, the premise intrigued me. It wasn’t exactly a spinoff, and it wasn’t exactly a sequel; rather, the film purported to re-tell “The Lion King” from the perspective of Timon and Pumbaa, the comic relief meerkat/warthog duo with a faintly Buddhist outlook on life. As such, “The Lion King 1 ½” included many scenes from the original “Lion King,” though often their resonance changed given the recasting of the protagonists.

This was a surprisingly metatextual turn for Disney, a company not usually known for postmodern literary technique. But given the source material, it wasn’t entirely unprecedented. “The Lion King” was based on Shakespeare’s tragedy “Hamlet,” and the characters Timon and Pumbaa were based on the “Hamlet” characters Rosencrantz and Guildenstern, childhood friends of the Danish prince.

What does this have to do with Stoppard? Recall that one of the most popular of the philosophically heady playwright's works is the 1966 dark comedy “Rosencrantz and Guildenstern Are Dead,” a retelling of “Hamlet” from the perspective of the titular duo. As Gregory Maupin, an actor, dramaturg and text coach at Kentucky Shakespeare, explained to Salon, “Rosencrantz and Guildenstern Are Dead” is “more in the line of absurdist/existentialist comedy, while ‘Hamlet’ is — I am clearly going to oversimplify here — an Elizabethan revenge tragedy.”

There has long been speculation about this point. A critic for Variety speculated about this in in 2004, when the movie came out. As Chris Willman, in a capsule review in Entertainment Weekly, wrote:

This chronologically concurrent quasi-sequel is sort of the Rosencrantz & Guildenstern Are Dead to the original’s ”Hamlet,” viewing the same narrative via meerkat Timon (Nathan Lane) and warthog Pumbaa (Ernie Sabella), taking the piss out of — or putting more farts into — ["Lion King's"] s mortal pretensions.

Even if critics suggested the connection, the film's creators don’t seem to have ever formally commented on it.

I had wondered about this mystery for years. The idea of a Stoppard-"Lion King" connection was just too rich and funny to be ignored. The mix of high and low, abstruse and kid-friendly — it was as if the “SpongeBob Squarepants” writers were to create an episode based on a David Foster Wallace short story.

So after re-watching “The Lion King 1 ½,” I looked through the credits to see if I could track down the screenwriter(s) and directors to see if someone could answer this question: Did Stoppard directly inspire "The Lion King 1½," or is this a coincidence?

Luckily, lead screenwriter Tom Rogers got back to me immediately.

“I actually didn't think it was much of a mystery but am happy to help clear things up,” Rogers said over email. “Yes, we absolutely had ‘Rosencrantz’ as inspiration for our 'behind-the-scenequel' … as well as ‘Mystery Science Theater 3000.’”

“We were aiming high and low. Mostly low, the ‘hot tub’ scene being a point of deep personal pride,” Rogers added.

The “hot tub” scene in question refers to a moment in the second act in which Timon, Pumbaa and Simba sit in a bubbling pond in the middle of the jungle, relaxing as one might in a hot spring. When Pumbaa retires to bed, the bubbles stop immediately, implying his gut were the source of the fount.

“All kidding aside, we liked the Stoppard play for something deeper that it implies — that each of us is the hero of our own story — a theme that Stoppard mines for comic absurdity but one that we thought would allow us to show that there's more to Timon and Pumbaa than Hakuna Matata,” Rogers added.

Rogers says that the contrast in tone between the more serious original and their side-quel was appreciated by those involved in the original; in other words, “The Lion King 1 ½” was seen by all as complementary. “When we started out, we didn't want to do another straight ‘progeny’ sequel and wanted to have a little fun poking at the grandeur of the original film,” Rogers says. “But we were also a little worried about desecrating hallowed ground.”

Maupin explained how that relationship mirrored the tonal difference between Stoppard’s “Rosencrantz and Guildenstern” and Shakespeare’s “Hamlet.” “Tonally, [‘Rosencrantz and Guildenstern’] is a lot closer to Monty Python’s ‘Life of Brian’ — a lot of early Stoppard could easily be structured Python, if that’s not an oxymoron — and while ‘Hamlet’ is tonally no New Testament, the relationship is similar — all the events of one are happening just offstage of the other and sometimes they just barely cross over for a couple of minutes.”

That’s a good description of “Lion King 1 ½,” too. Major, serious events from the original are happening in the periphery in many moments, though often the viewer is treated instead to the duo’s comic mischief rather than the serious dramatic plot points. Like Stoppard’s play, which, as Maupin says, is “constantly meta.”

Maupin describes the tone of “Rosencrantz and Guildenstern Are Dead” as embodying a “‘cheeky-schoolboy-respects-Great-Work-but-doesn’t-respect-the-common-takeaways’ vibe.”

That was exactly what the screenwriters for “Lion King 1 ½” were going for, Rogers says. “Roger Allers and Irene Mecchi (co-director and co-writer of the original film) joined us for an early consultation, heard our alternative explanation for why the animals bow towards Pride Rock (Pumbaa's aroma knocks them down), and said, ‘Yes please, more of that.’”