Trump tweeted conspiracy theories connecting the Clintons to Jeffrey Epstein's death, despite his own Epstein ties 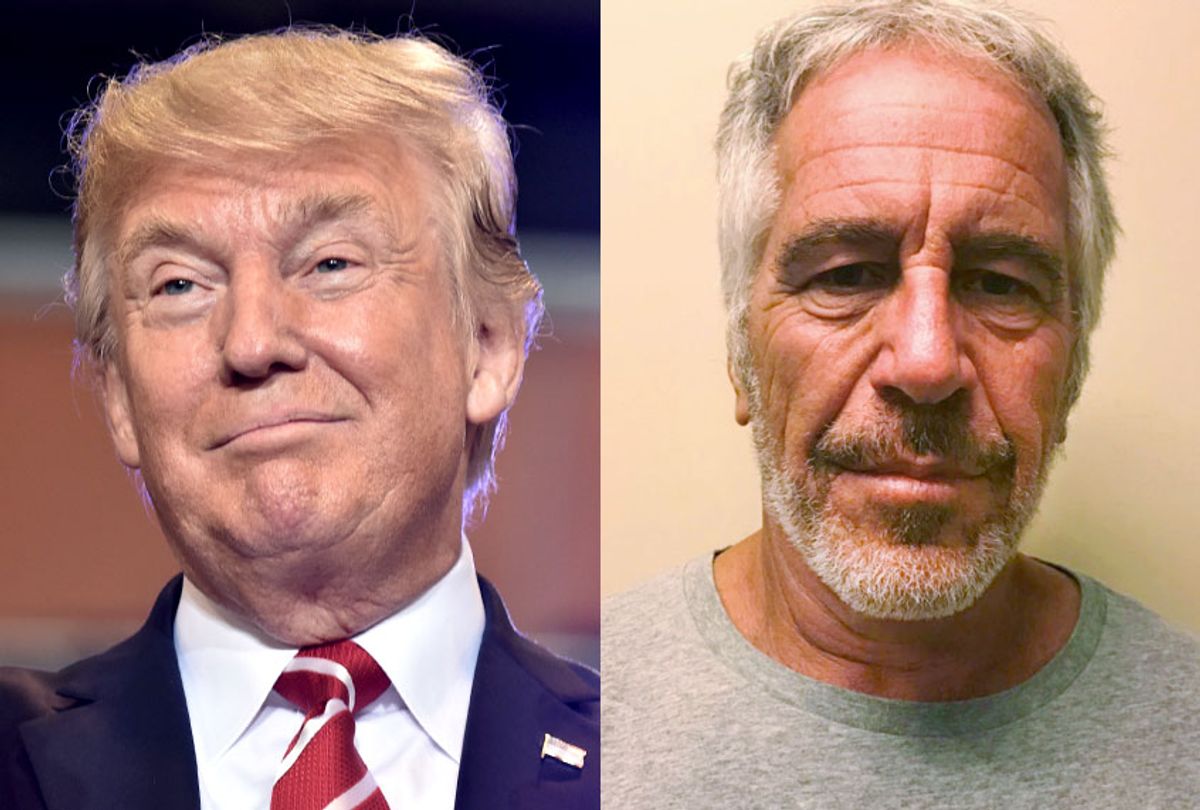 President Donald Trump posted a pair of tweets on Saturday evening accusing former President Bill Clinton and his wife, former Secretary of State Hillary Clinton, of somehow being involved in the apparent suicide of alleged pedophile Jeffrey Epstein — even though Trump himself had ties to the disgraced billionaire.

The first tweet sent out by the president was a retweet from an account called "Breaking News Live." It claimed that "BREAKING: Documents were unsealed yesterday revealing that top Democrats, including Bill Clinton, took private trips to Jeffrey Epstein’s 'pedophilia island.'" The president did not tweet out another post from the same account later that evening which claimed, "MORE: President Trump was also mentioned multiple times in the unsealed Documents from yesterday. It is unclear exactly what role President Trump played in the Epstein case."

The president also retweeted a post by comedian Terrence K. Williams which said, "Died of SUICIDE on 24/7 SUICIDE WATCH ? Yeah right! How does that happen #JefferyEpstein had information on Bill Clinton & now he’s dead I see #TrumpBodyCount trending but we know who did this! RT if you’re not Surprised #EpsteinSuicide #ClintonBodyCount #ClintonCrimeFamily."

Williams later responded to criticisms of his tweet by posting, "President Trump Retweeted This & they are calling him Unfit for doing so. They want to know why he retweeted a 'conspiracy theorists & Whacko' when did common sense become a Conspiracy 1,000s of White Liberals are calling me out of my name but they Claim Trump is the Racist."

Angel Ureña, a spokesman for former President Clinton, dismissed Trump's accusations in a tweet of his own.

"Ridiculous, and of course not true — and Donald Trump knows it. Has he triggered the 25th Amendment yet?" Ureña posted on Twitter.

Epstein, a billionaire and alleged pedophile who was indicted on sex trafficking charges last month, was found dead in his cell by apparent suicide on Saturday. The apparently successful suicide attempt followed an unsuccessful one in the previous month, which was discovered when authorities found Epstein lying in the fetal position on his cell with marks around his neck. There is no evidence that Epstein's death was the result of foul play, but because right-wing conspiracy theories have long claimed that the Clintons murder people with dirt on them, his apparent suicide has provided grist for the online rumor mill. Questions have been raised, on the other hand, about why Epstein was in solitary confinement instead of on suicide watch due to his previous effort to take his own life.

Ironically, although Epstein did have connections to the Clintons (as well as other powerful politicians), he also had connections to Trump and his inner circle. Trump's labor secretary Alex Acosta was forced to resign after it was revealed that he had cut a sweetheart deal for Epstein in 2008 while serving as a U.S. attorney in Miami. Trump himself infamously told New York magazine in 2002 that Epstein was a "terrific guy" and "a lot of fun to be with," adding "it is even said that he likes beautiful women as much as I do, and many of them are on the younger side. No doubt about it — Jeffrey enjoys his social life." Video footage has also been uncovered of Trump partying with Epstein in 1992, with the clips showing the two men ogling young women with the president appearing to point to one of them and say, "Look at her back there — she’s hot."