Even if you're not a big fan of the CNN host, his Trumpian attackers are bigots, cowards and punks 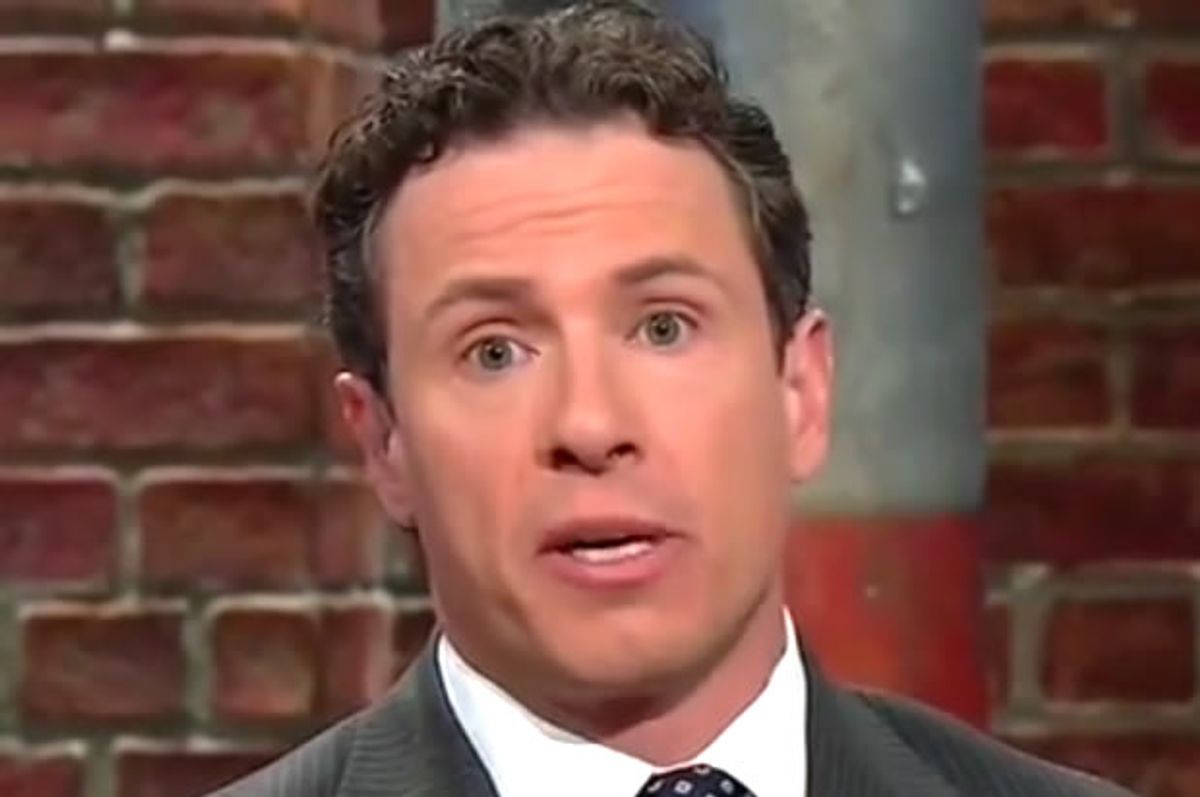 The man who used an ethnic slur against CNN anchor Chris Cuomo epitomizes everything contemptible about the worst of President Donald Trump's supporters. He was racist, smug, dishonest and — when the going got tough — cowardly.

So, of course, the president backed him up.

Spoiler alert: This essay will end by explaining why Trump, those trolls and everyone who defends them are, to use Cuomo's colorful language, "punk-ass bitches." But first, a review of what happened.

During the exchange in question, an unidentified man referred to Cuomo as "Fredo," a possible or plausible slur against Italian-Americans (admittedly, opinions differ) that implies weakness, stupidity and Mafia connections. The epithet was inspired by the Francis Ford Coppola films "The Godfather" and "The Godfather: Part Two" in which John Cazale's character, Fredo Corleone, repeatedly bungled important mob business and was widely viewed with ridicule and shame by his family.

It is not an innocuous term. Referring to a person of Italian descent as Fredo, unless that person is actually named Fredo, is the equivalent of referring to a Jewish person such as myself as Shylock, the money-grubbing anti-Semitic stereotype from William Shakespeare's "The Merchant of Venice." It is done for bigoted reasons, plain and simple.

The person who said this to Cuomo clearly knew that that was the case. Throughout the exchange with Cuomo, he held to a tone of passive-aggressive arrogance; like all right-wing trolls, he derived pleasure from the knowledge that he was "owning the libs" (whether or not that's an accurate characterization of Chris Cuomo).

Even without the guy's vocal intonation as a dead giveaway, however, there were also the repeated lies. He acknowledged recognizing Cuomo from CNN and disliking his coverage ("You're a much more reasonable guy in person than you seem to be on television"), then claimed that he thought Fredo was his actual name. At one point he insisted that he thought Fredo was Cuomo's brother, even though it would make no sense for him to refer to Chris Cuomo by his brother's supposed name. After Cuomo threatened to get physical — while, to be clear never actually assaulting the guy — the troll got nervous and said, "Hey man, hey, listen, we don't want any problems, bro." Yet in case you mistakenly believe he felt any regret over what he'd said, either the man or one of his friends shouted to Cuomo, "Look at all these cameras. You're in for it. You're in for it."

Then the dudebros uploaded the video, convinced that they had "won" because they insulted a prominent media figure based on his ethnicity and he got upset about it.

These were bullying tactics. These men trolling Cuomo decided to use a borderline ethnic slur against him — and whether the chief troll is partly of Italian heritage, as he claims, is irrelevant — recorded him as he responded with justifiable outrage, wimped out when Cuomo challenged them to stand by their bigoted language, became afraid when threatened with actual consequences, and then lashed out with one final verbal kick to let the so-called liberal know they believed they had established their dominance

To be clear, again: If Cuomo actually had physically assaulted the trolls, he would have been wrong. That wouldn't have made them retroactively right, of course, but physical violence is never justified as a response to insults or despicable language.

Anyway, Cuomo never touched the guys. They trolled him, and the president of the United States, shamefully but unsurprisingly, is egging them on.

Trump clearly exulted in the fact that someone in the media he dislikes was demeaned. The most generous interpretation of that tweet is that he doesn't care or didn't notice that the incident involved an ethnic insult; a more likely interpretation is that Trump is himself a bigot, and finds attacking Cuomo based on his ethnicity to be fair game.

Does Rudy Giuliani, the former New York mayor who now serves as the president's lawyer, think it was okay for Cuomo to be called Fredo? Does Mike Pompeo, his secretary of state? Does Dan Scavino, Trump's director of social media?

This question must be expanded beyond the Italian-Americans who work for Trump who are of Italian descent. I am Jewish, felt disgusted at the Jews in Trump's inner circle — including Stephen Miller, Trump's senior policy adviser; Steve Mnuchin, his treasury secretary; and Jared Kushner, his son-in-law — for their silence when the president defended the neo-Nazis in Charlottesville. I don't understand how the women who work for or support Trump justify his assault on reproductive rights or his rampant misogyny. I'm baffled that African Americans (albeit few in number) can work for him or support him when he calls for abusive police tactics, refers to largely black nations as "shithole countries" and encourages his followers to chant "Send her back" at a congresswoman born in Somalia.

As we ought to understand by now, when Trump and his supporters use this kind of language, it isn't harmless. The goal is to demean people who disagree with the president as less than fully American, and then sadistically celebrate when those people get upset by it. Such trolls are the lowest forms of life in our political ecosystem: Unable to prevail in the field of logic and ideas, they resort to abject cruelty, and rarely if ever have the courage to admit what they're doing because they know they're wrong.

The First Amendment protects everybody's right to air their political opinions without facing legal consequences, but that doesn't mean that everybody deserves a platform, or that the rest of us have to listen. Any reasonably developed cerebrum recognizes that what such people have to say isn't worth listening to. These kinds of trolls should be dismissed from all political conversations not because their ideology is wrong (though it is), but because they aren't saying or do anything substantive. They are bullies kicking sand in the eyes of other children on the playground because they think it's fun — and because they know they can't hack it in a fair, civilized game.

They don't deserve violence, but they do deserve to be referred to as "punk-ass bitches," because that's exactly what they are. I don't care whether or not you like Chris Cuomo, or agree with his opinions. But anyone who defends these idiots' behavior, or who criticizes Cuomo for his response, is also a punk-ass bitch. Yeah, I'm talking about you, Mr. President.