Disgraced former Trump aides need money to pay their legal bills. What could be better than a gathering of nutjobs? 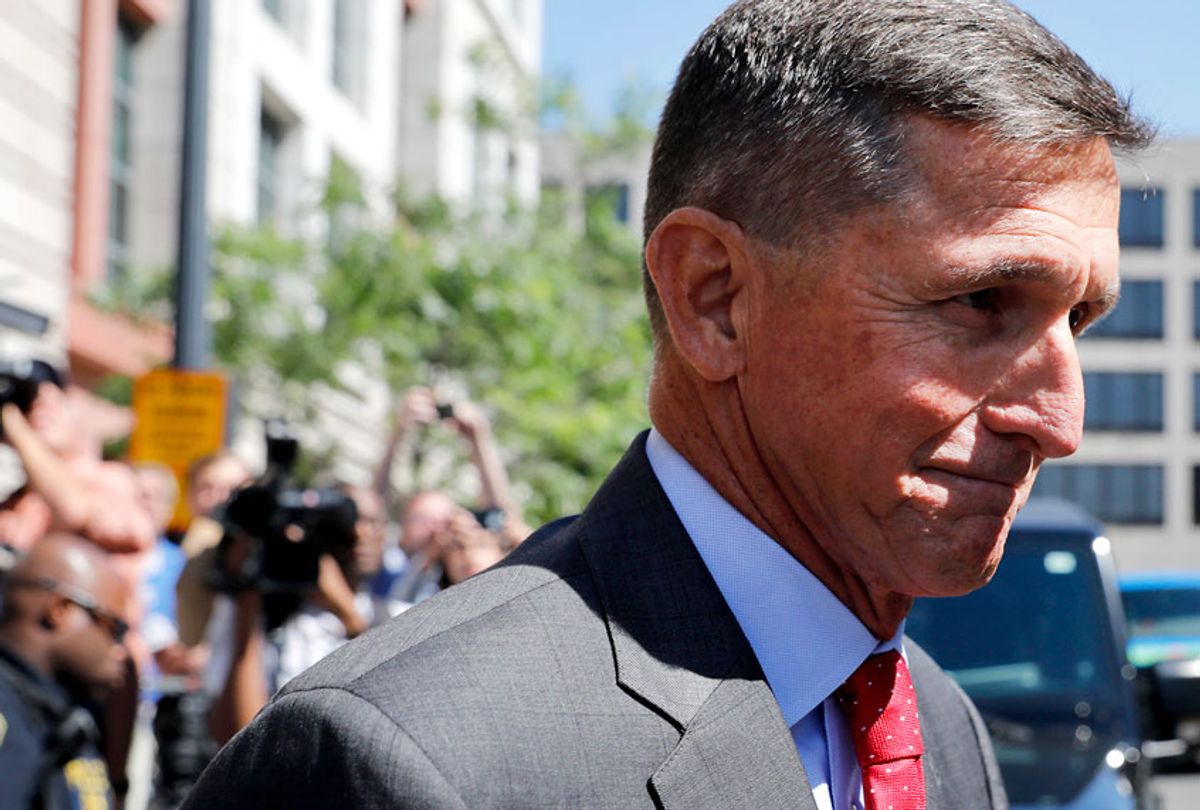 Two former Trump aides — both of whom have been convicted of crimes — will speak at a right-wing conference organized by a QAnon conspiracy theorist to raise money for mounting legal bills stemming from the Mueller probe.

The conference, which features a logo that is an American flag with stars rearranged to form a “Q”, is billed as an event for “patriotic social media warriors” to prepare for the upcoming “digital civil war” against “censorship and suppression.”

The event website offers tickets ranging from $49 to $2,500 for an “Ultra VIP” pass. The site says that the “majority of proceeds” will go to Flynn’s legal defense fund. Though he pleaded guilty in the Mueller probe, Flynn continues to await his sentencing and recently hired a new lawyer who has spread anti-Mueller conspiracy theories on Fox News.

The event is organized by Rich Granville, the CEO of Yippy Inc. Granville’s Twitter feed is almost entirely filled with references to QAnon, an unhinged conspiracy theory that claims a secret government insider who goes by “Q” is dropping clues about a secret Trump operation to fight the “deep state” by sending prominent Democrats to face secret military tribunals and executions at Guantánamo Bay.

Granville acknowledged that he is a QAnon believer to Mother Jones but denied that his logo, a flag that clearly has a large Q on it, is a reference to the conspiracy theory favored by especially unhinged far-right partisans. He bizarrely claimed instead that the stars refer to “Flynn’s prior status as a three-star general,” the publication reported.

“It does look like Q, but there is no reference to QAnon anywhere on that site,” Granville insisted.

He told the outlet that he believes the secret Trump plot espoused by QAnon followers is no theory.

“I am with anybody who is with the United States of America, any digital soldier, any patriot, any average American who is doing their part to support the president of the United States,” Granville added.

Flynn pleaded guilty to lying to the FBI about his contacts with Russian officials in December 2017. He also admitted to lying in Foreign Agent Registration Act documents about having lobbied for the Turkish government while serving as an adviser to the Trump campaign. Mueller’s office recommended a lenient sentence for Flynn, citing his “substantial cooperation.” QAnon believers have speculated that Flynn is actually working with Mueller to bring down the deep state and expose the alleged Democratic pedophile ring, Mother Jones reported.

Trump has not spoken publicly about QAnon but has retweeted QAnon conspiracy theorists, invited them to the White House and included rally-goers carrying QAnon signs in a recent campaign video. At a rally earlier this month, a speaker at one of his rallies recited a QAnon slogan minutes before Trump took the stage.

The FBI’s field office in Phoenix issued an intelligence bulletin in May warning that QAnon poses a domestic terror threat.

“The FBI assesses these conspiracy theories very likely will emerge, spread, and evolve in the modern information marketplace, occasionally driving both groups and individual extremists to carry out criminal or violent acts,” the memo said, warning that the threat will likely increase during the 2020 campaign.

Earlier this year a QAnon believer named Anthony Comello killed a man believed to be a crime boss because he believed the man was a “member of the deep state,” his attorneys said.

“Mr. Comello’s support for ‘QAnon’ went beyond mere participation in a radical political organization. It evolved into a delusional obsession,” the attorney said. “Mr. Comello became certain that he was enjoying the protection of President Trump himself, and that he had the president’s full support.”