After recent political turmoil and government turnover, Puerto Rico's economy might be in for a transformation 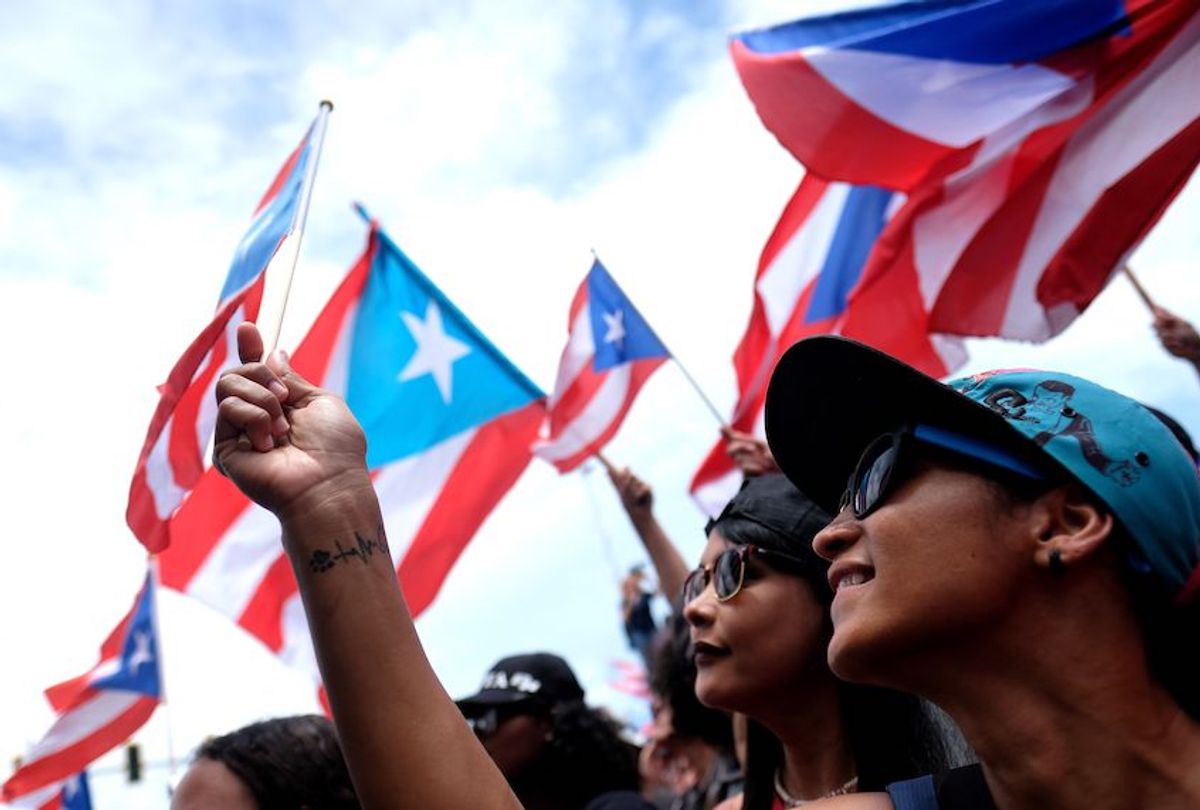 Demonstrators wave flags as they participate in a march the day after the governor of Puerto Rico, Ricardo Rossello, resigned from his charge in San Juan, on July 25, 2019. (Ricardo Arduengo/AFP/Getty Images)
--

While the United States has some of the most successful community currencies in use, such as the BerkShare, surprisingly few Americans actually use them or know anything about them outside the communities who use them. In the EU there is a lot of interest in community currency — Spain and England have many, including the Bristol Pound.

And while the U.S. dollar is widely used not just in the U.S. but around the world, it is some of the most homogenized of any currency: Single color, with affluent white men associated with the U.S. government on each bill. That is what our currency is saying is valuable. Sure, each man portrayed on U.S. currency might have a different story, but what do those bills say about our culture, our society, and what we as a people value? Considering what other countries include on their currency — from the natural world to the colors they use — how does our currency represent our country to the people who use it?

If you haven’t spent much time thinking about those things, now is a good chance to start. Or even take it further, and create your own currency.

That’s what Frances Negrón-Muntaner did when she created Valor y Cambio (VyC). An artist and professor of English and comparative literature at Columbia University, she is also Puerto Rican, inspired by the issue of debt artists often incur as well as the Puerto Rican debt crisis. Of course, Puerto Rico uses U.S. dollars. But Negrón-Muntaner started asking questions about debt, value, currency, art, and justice for the Puerto Rican diaspora.

She wanted to start a conversation about value and to promote the notion of community currency and practice of the solidarity economy.

So began a three-year process, the first two years spent on understanding the unpayable debt Puerto Rico had incurred. From there, she and her team studied currencies around the world, especially colonized islands, including New Zealand, Australia, and the other islands of the Caribbean. Much of their currency was colorful, with many references to the natural environment. “They were inspiring to us, because the natural environment is so central to everyday life,” she says. Currency made by Māori artists, and other artists, was especially inspiring. “What kind of stories, and what kind of values does currency carry?” she asks.

“What we found is American currency is one of the least imaginative, not just in the design, but in the figures it uses to tell the story of the American people. In Mexico, it features artists. In Ireland, it features writers. You have a recognition of story as value.”

Negrón-Muntaner and her team, including visual artist Sarabel Santos Negrón, spent time on the currency’s design, determining what stories to tell, what the denominations would be, etc. Every component was thought out extensively, from the colors to the details, and Negrón-Muntaner and her team surveyed Puerto Ricans in Puerto Rico and in New York City to learn what figures embodied the values they were seeking to uplift: justice, equity, creativity and solidarity.

Every person on the bills, including poet Julia de Burgos and baseball player Roberto Clemente, embodies those values. “We have women, men, activists, poets, athletes, youth leaders, and doctors. I think we cast a broader net of what we consider valuable,” says Negrón-Muntaner.

And then there is how you first obtain the bills: You go to an ATM machine — an actual ATM repurposed for this project — and you are asked a series of four questions about your values and your community. You answer the four questions, and out pop the bills, just as any other ATM would distribute currency. The machine records you answering the questions, and becomes part of the research Negrón-Muntaner is conducting.

“The first exchange is the story of what you value in exchange for the bill,” says Negrón-Muntaner. “Then there is the QR code on each bill [leading to more information about the currency], so you understand why it’s valuable.”

What the currency shows is the values of the Puerto Rican community.

Like many community currencies, the bills started at farmer’s markets, in this case on the island of Puerto Rico. Today, the machine lives on the Lower East Side of New York City, and its bills are accepted by local small businesses both in Puerto Rico and throughout New York City. Later this fall, the ATM will move up to East Harlem, to the neighborhood affectionately called El Barrio by the tens of thousands of Puerto Ricans, Mexicans, and other Latin Americans who live there.

One of the challenges the currency is facing is that, while it is usable for necessities like food, on an island where nearly 50 percent of the population is living below the poverty line and Negrón-Muntaner says people waited in line for hours to obtain the currency, they don’t want to spend it: “It’s so beautiful, they want to keep it as art.”

Or, she says, because they deeply and profoundly identify with the story portrayed on the bills.

People, she says, want to see Roberto Clemente, Ramón Emeterio Betances, Julia de Burgos, or the Cordero siblings on their currency, and many deeply identify with their stories — these people have stories Puerto Ricans are proud of, and emulate some of the best of Puerto Rican heritage.

They are also the stories of migration and trauma. The people of the island and their loved ones on the mainland are still reeling from Hurricane Maria, the austerity crisis, and the mass migration that occurred as a result of the other crises. Half a million Puerto Ricans have left Puerto Rico as a result, Negrón-Muntaner explains.

“There is trauma in the diaspora,” says Negrón-Muntaner. “A number of our bills are for people who migrated. They were exiled. Every single bill tells the story of the displacement of our diaspora.”

The idea of a different community currency is one way to address the trauma and bring life and pride to the people. And the people find value in that.

Others, she says, wanted to keep the currency as hope for the future, and as part of a Puerto Rico that is non-colonial and equitable. “They found what the bill represented more valuable than food.”

The people who happily spend the currency, she says, are very young people, children between the ages of 7 and 12, who love the currency and bring their family to the machine to get more. Negrón-Muntaner says that one child told her he loved the currency “because nobody gives kids money.”

Children are denied political and economic agency, she explains. And this currency, as one young person told her, was earned when they shared their values, “so we can use it any way we like.”

Negrón-Muntaner says she asked one child about the difference between this currency and U.S. currency, to which the child replied, “there’s a bunch of white men on U.S. currency.”

“He’s nine, and already he could see the values of U.S. currency are a certain kind.”

Negrón-Muntaner also says the project has highlighted the difference in understanding of community currency and solidarity economy between those in New York City and those in Puerto Rico, and the difference between men and women.

“What took me a minute to explain in Puerto Rico took me 20 to explain in NYC,” she says. “There was a gender issue too. It took much less time to explain solidarity economy to women than men.”

Women, she explains, understand solidarity economy because that’s the way women get many things accomplished, particularly in questions of care — for the elderly, care for children, care for their families and communities, especially when resources are scarce.

All of these issues aside, the root of this project, says Negrón-Muntaner, is fundamentally joy — a realization she arrived at later. “I didn’t expect it. But I felt joyful working on this. It allowed the imagining and practice of new possibilities, new forms of relating to each other. It created a memory of the future, that this can be the future. We’re going to practice it now and in de-colonial joy: The moment where you glimpse at a different possibility or set of possibilities.”