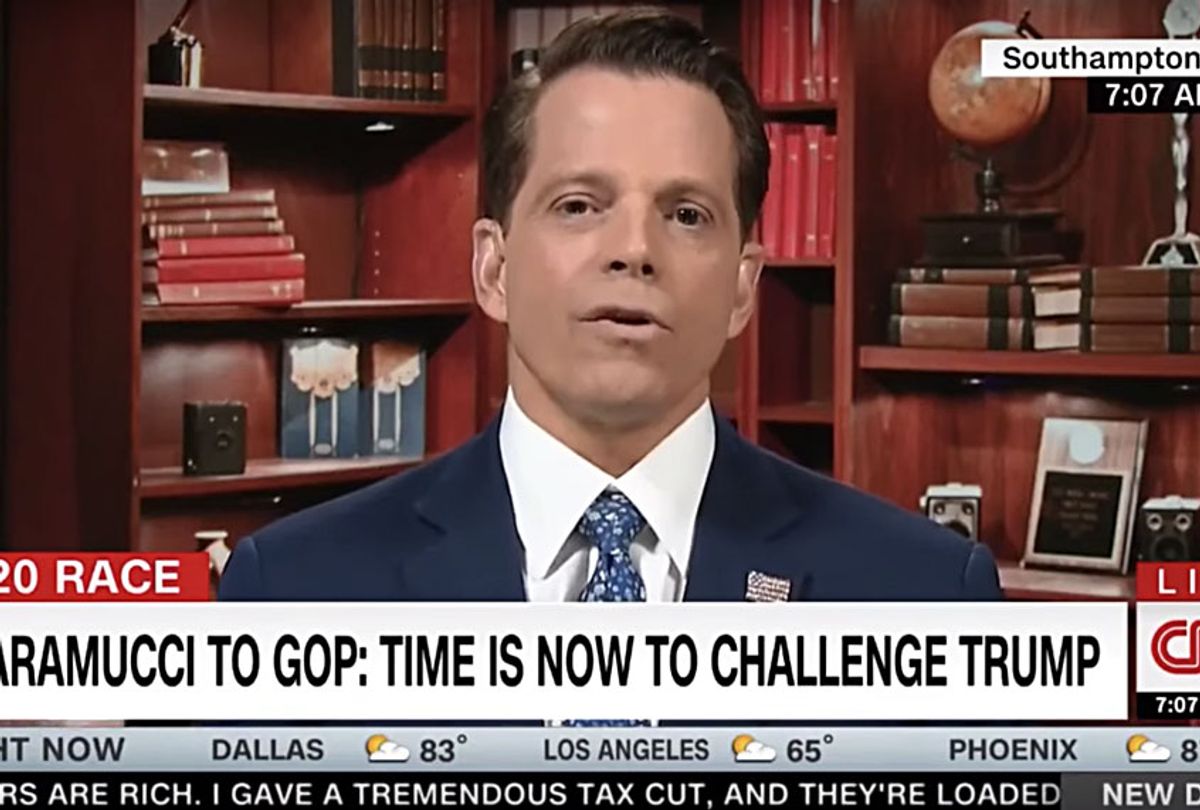 Former White House communications director Anthony Scaramucci revealed on Monday that he is assembling a coalition of past members of President Donald Trump's Cabinet in an effort to replace him as the Republican Party's presidential nominee in 2020.

Scaramucci, who withdrew his support for the president in recent days, said he is “in the process of putting together a team of people" who will speak out against Trump and find a candidate to challenge him for the GOP presidential nomination next year.

"This is not a 'Never Trump' situation. This is not just screeching rhetoric. This is — OK, the guy's unstable. Everyone inside knows it. Everyone outside knows it. Let's see if we can find a viable alternative,'" Scaramucci told CNN on Monday. "Moreover, I've got to get some former Cabinet officials in unity to speak up about it. They know it's a crisis."

Scaramucci, who was previously one of the president's most ardent defenders on cable news, issued a warning to Republicans: "You have to break [from Trump] for your children."

"You can't have the social fabric of the United States disintegrate over one man," the financier continued. "A recession is like a bone-break."

Scaramucci did not offer any names of people associated with the coalition he said he was constructing, although he predicted there would be a "trove" of people willing to speak out publicly against Trump by "middle to late fall." He also did not disclose the names of potential candidates he and his alleged team are looking to support in the GOP primary.

"I don't think it's fair to those people," he said.

Scaramucci, who lasted just 11 days as the White House communications director before being fired, announced last week that he no longer supports Trump's re-election bid and that the top of the GOP's presidential ticket needs to be replaced in 2020. He has gone on a media blitz in recent days to draw attention to the president's "increasingly divisive rhetoric," which he claims is damaging the "fabric of our society."

He argued Monday that if more Republicans begin to break from Trump, a potential GOP presidential candidate could "skip over the states of Iowa and New Hampshire and South Carolina and work on bigger states."

Trump, in an apparent response to Scaramucci's interview, described his former aide as "nut job" who "unfortunately wheedled his way into my campaign."

"I barely knew him until his 11 days of gross incompetence," the president tweeted, even though he hired Scaramucci as his communications director.

Although Scaramucci has urged the Republican Party to  "call in a good relief pitcher" and replace Trump as the party's nominee in 2020, Trump remains incredibly popular with GOP voters. Roughly 88 percent of GOP voters say he is doing a good job as president, while 42 percent of all voters approve of his performance in office. Still, any challenger would likely face long odds in a primary bid against Trump.

So far, former Massachusetts Gov. Bill Weld is the only Republican to announce plans to challenge Trump in 2020.

Trump could also face a challenge from former South Carolina Rep. Mark Sanford, who is considering jumping into the GOP primary. Sanford said Trump does not deserve to be re-elected, because he is moving the country in the "wrong direction" and there needs to be a "course correction."