Elizabeth Warren offers public apology to Native Americans: "I am sorry for any harm I have caused" 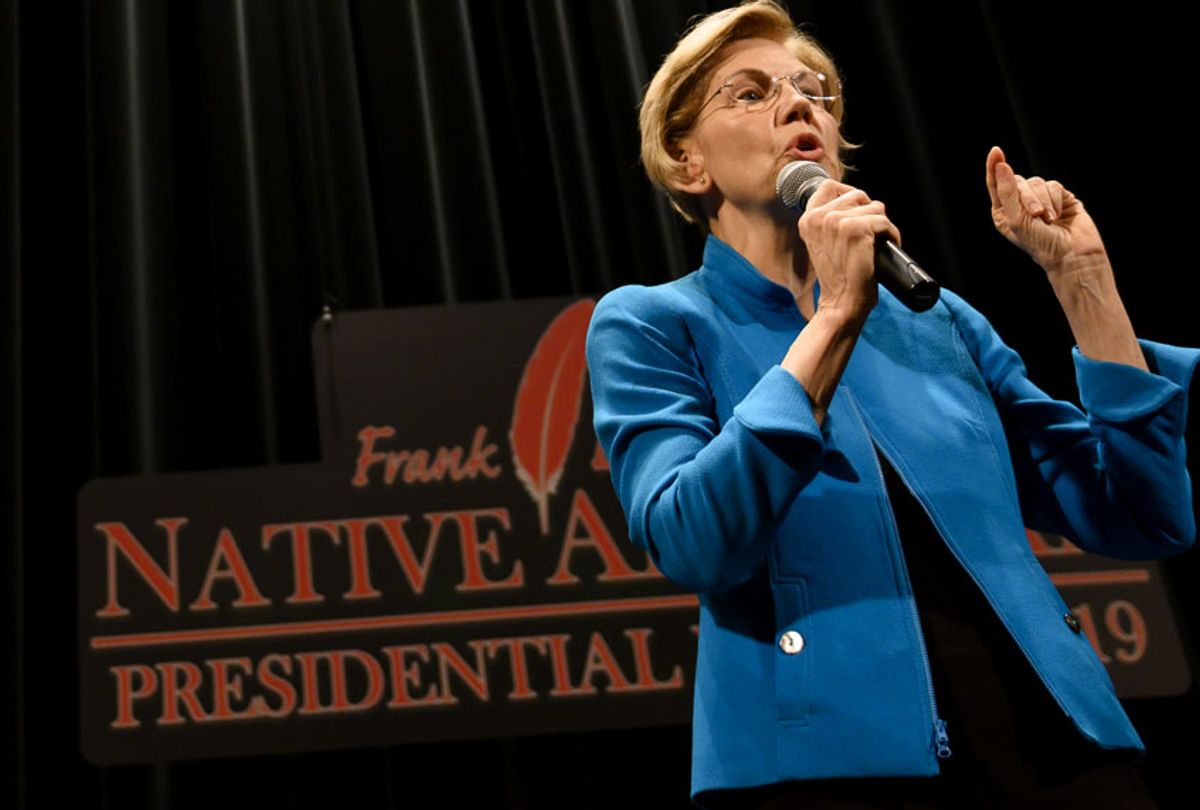 Sen. Elizabeth Warren offered her most direct, public apology for the "harm" she caused by claiming Native American ancestry for nearly two decades on Monday. In doing so, she vowed to fight for the many native people across the country if elected president.

"Now, before I go further in this, I want to say this: Like anyone who has been honest with themselves, I know I have made mistakes," said Warren, who was greeted with a standing ovation when she took the stage at the Frank LaMere Native American presidential forum, named for the longtime activist who died in June.

"I am sorry for harm I have caused. I have listened and have learned a lot, and I am grateful for the many conversations that we've had together," she continued. "It is a great honor to be able to partner with Indian Country. And that's what I've tried to do as senator, and that's what I promise I will do as president of the United States of America."

Warren's remarks at the forum, held at a theater in Sioux City, was part of the senator's broader effort to move past the political fallout of the long-running controversy over her past claims of tribal ancestry, which culminated in the widely-criticized release of DNA test results last year.

As Warren continues to surge in nationwide polls of the 2020 race, she is attempting to prove to voters that the controversy will not cripple her in a general election matchup against Trump.

In keeping with her reputation as the presidential hopeful with a steady stream of detailed policy plans, Warren unveiled a wide-ranging proposal last week focused on a host of Native American issues, including "restoring tribal sovereignty," addressing the "epidemic of missing and murdered indigenous women" and empowering tribes to combat substance use disorders. She also released an expansive measure with Rep. Deb Haaland, D-N.M., one of the first Native American women to serve in Congress, which covers criminal justice, economic development, education, health care and housing.

Warren's latest proposals appeared to help her receive a warm reception from attendees at the tribal forum. She prompted widespread applause when she called for expanding the ability of tribal nations to prosecute non-native individuals who commit crimes on their land.

"Full funding for housing, for health care, for education, for infrastructure — those are not optional," she said Monday. "We need to change the rules and make it happen."

Warren also vowed to address the issue of missing and murdered indigenous women, including by improving the federal government's collection of data on the problem. At the beginning of the forum, a moment of silence was held for Savanna LaFontaine-Greywind, a Native American woman from North Dakota who disappeared two years ago Monday and was later found dead.

Warren faced a barrage of criticism last year after she released the results of a DNA test providing evidence she had a Native American ancestor.

The DNA analysis — part of a broader pushback against President Donald Trump's long-standing taunts and disparaging nickname of "Pocahontas" — revealed Warren likely had a Native American ancestor six to 10 generations ago, although the Cherokee Nation joined other tribal officials in rebuking the senator for attempting to attribute tribal membership to genetics. Warren later apologized to the Cherokee and expressed regret before Monday's event.

She was introduced on Monday by Haaland, who endorsed her presidential campaign last month and has worked with her on part of her proposal aimed at helping tribal communities. Haaland called it the "boldest" plan yet to "address the promises that have been broken and the need in our communities."

"Some media folks have asked me whether the president's criticisms of her regarding her ancestral background will hamper her ability to convey a clear campaign message," she told the forum audience. "I say that every time they asked about Elizabeth's family instead of the issues of vital importance to Indian Country, they feed the president's racism."

Later Monday, Warren campaigned in Minnesota, a state Trump lost by just 1.5 percent in 2016 and seeks to win next year amid his ongoing feud with Rep. Ilhan Omar, D-Minn. The senator's first appearance in the Land of 10,000 lakes drew what her campaign said was her largest crowd yet — an estimated 12,000 people — to a town hall at Macalester College, a private liberal arts school in St. Paul.