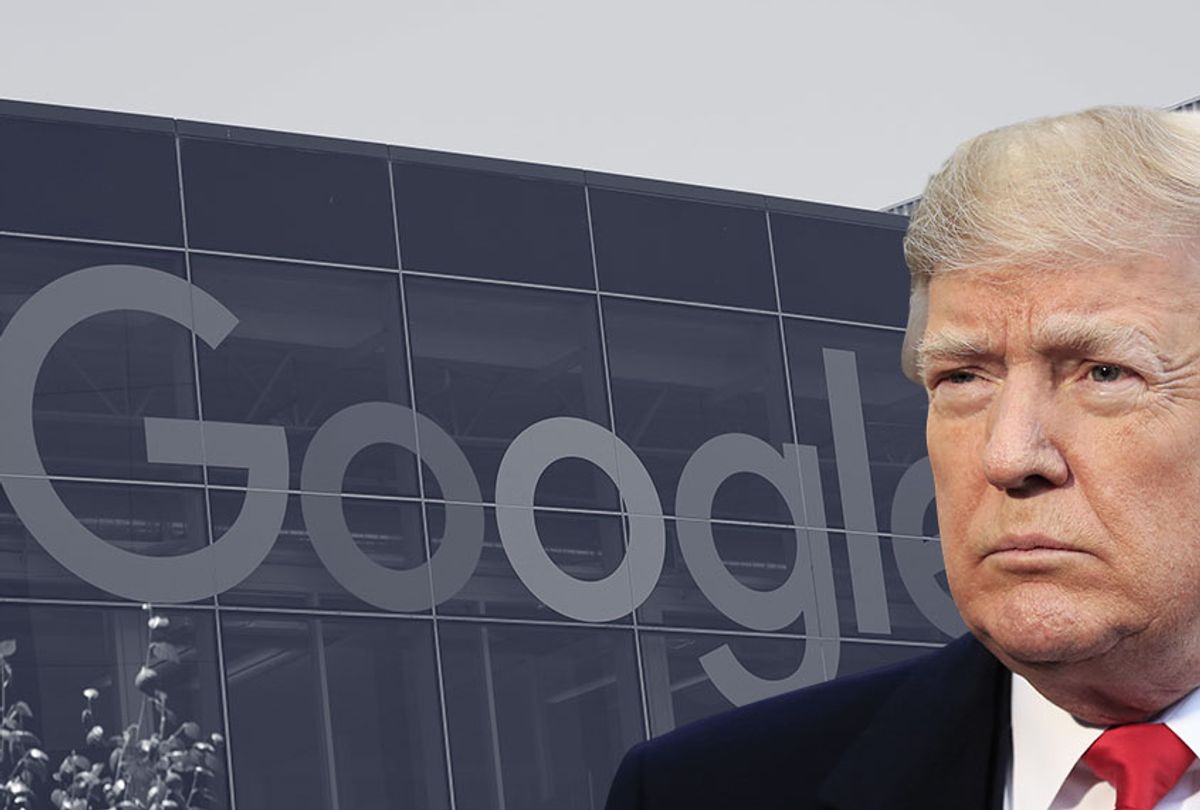 President Donald Trump accused Google of manipulating votes in the 2016 presidential election in order to hurt him and help Democratic nominee Hillary Clinton, even though the report he cited was already controversial — and he mischaracterized its conclusions.

"Wow, Report Just Out! Google manipulated from 2.6 million to 16 million votes for Hillary Clinton in 2016 Election! This was put out by a Clinton supporter, not a Trump Supporter! Google should be sued. My victory was even bigger than thought!" Trump posted on Twitter on Monday night.

It added, "We also found different levels of bias in different search engines, as well as evidence of demographically-targeted bias. We don’t know what caused these patterns of bias, but no matter what the cause or causes, given the power of search rankings to shift votes and opinions without people’s awareness, they are a matter for concern."

Although the report claimed that the supposed bias could impact "upwards of 15 million votes" in the 2020 election, it did not say that this was true of the 2016 contest. When interviewed by CNN, Epstein disputed that Google had "manipulated" votes in 2016 or even that it had intentionally skewed its search algorithm or results, explaining that "I don't have any evidence that Google manipulated anything. I just have evidence that there was this bias — highly statistically-significantly bias."

Google disputed the study's conclusions, arguing that "this researcher's inaccurate claim has been debunked since it was made in 2016. As we stated then, we have never re-ranked or altered search results to manipulate political sentiment. Our goal is to always provide people with access to high quality, relevant information for their queries, without regard to political viewpoint."

Other academics have also called the study's methods into question. Criticisms include that it conflated reliable sources like the Washington Post with unreliable ones like Breitbart, and that the study did not establish a link between the supposed bias in Google's search results and how people voted in the 2016 election. Michael McDonald, a political science professor and elections expert at the University of Florida, also pointed out that because American voters tend to learn a great deal about the two candidates and have access to a wealth of ideologically various sources, it is simply "not plausible" that something like search engine results could have had the degree of impact that the study speculates it did.

Hillary Clinton also spoke out about Trump's claim, tweeting that "the debunked study you’re referring to was based on 21 undecided voters. For context that’s about half the number of people associated with your campaign who have been indicted."

This is not the first time that Trump has used debunked conspiracy theories to try to explain away his losing the popular vote to Clinton in 2016. Early in his presidency, he attempted to create a commission on voter fraud in order to draw attention to the alleged millions of illegal voters who cast their ballots for Clinton, even though there is no evidence that illegal voting happened anywhere near that scale. The commission was later disbanded.