This discussion is in light of the Israeli government's decision to bar Reps. Ilhan Omar and Rashida Tlaib 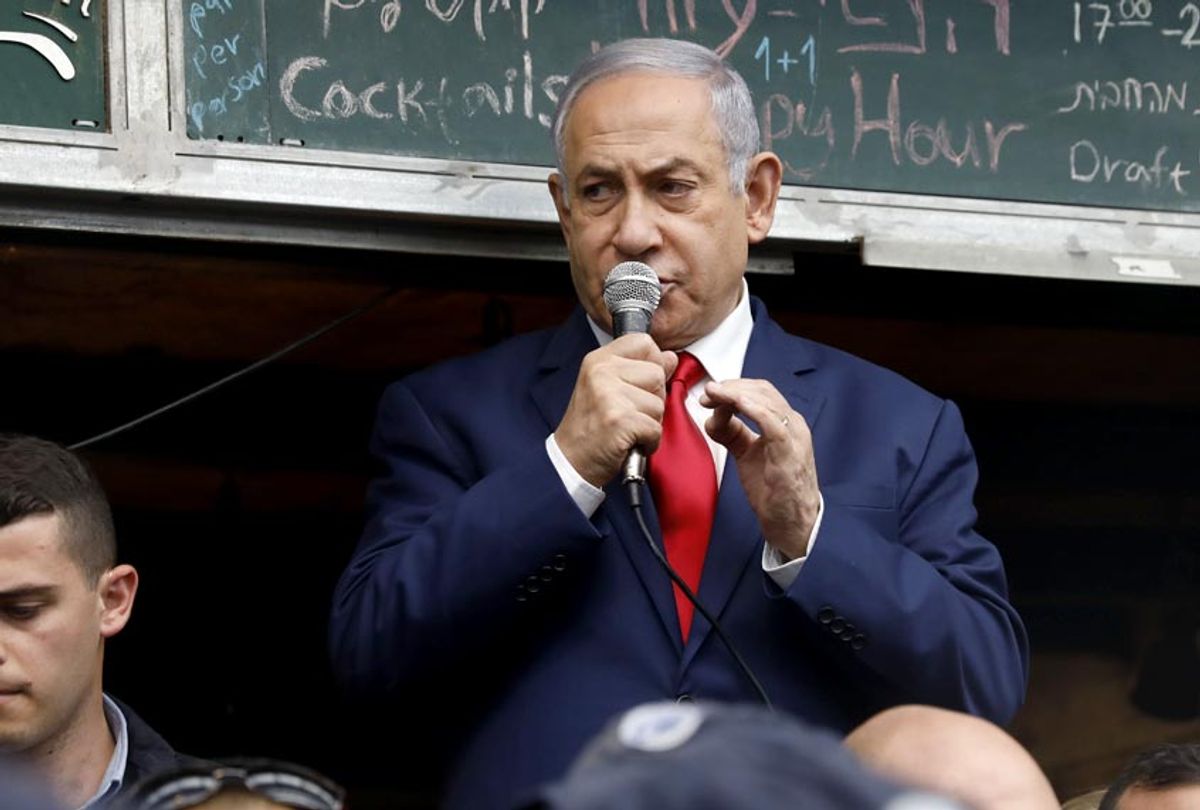 Israeli Prime Minister Benjamin Netanyahu, leader of the Likud party, addresses his supporters at the main market of Jerusalem on April 8, 2019, a day ahead of the electoral polls. (Getty/Menahem Kahana)
--

With a blatant show of support for President Trump’s strategy of racial polarization, Israeli Prime Minister Bibi Netanyahu not only signaled his government’s support for Trump in the 2020 election; he also served to unify an often-fractious party around a more anti-Israel message that resonates across the party’s left-center spectrum.

Israel’s intervention in the 2020 campaign is not like the subtle, underhanded approaches that President Putin and his Russian agents used to help the Trump campaign in 2016. This isn’t the IRA troll factory exposed by Robert Mueller. This is a prime minister as troll sponsored by Donald Trump.

The social media binary tends to divide Democrats into two hostile camps on the question of foreign interference in the 2020 election. Centrists and their cable TV spokesmen see Russia state interference as the primary threat, while leftists deprecate Russia’s secret and extensive efforts to help Trump and complain that Saudi and Israeli interference is actually much greater.

The partisans of this war do their best to convince each other and the public that treachery is afoot: Rachel Maddow is a “Russia conspiracy theorist.” No, Tulsi Gabbard is “a Russian agent.” In reality, there’s less of a contradiction than the rhetoric suggests.

It should now be clear that the Russian, Israeli and Saudi governments are all authoritarian regimes that are seeking to keep authoritarian Trump in power. All of these governments — and their intelligence services — intend to “interfere” in the United States 2020 presidential election; that is to say, they will take secret action in order to secure a second term for Trump.

It is not “anti-Semitic” to say that Netanyahu is scheming against American democracy. It is not a “hoax” to say Putin (and operatives like Yevgeny Prigozhin) want to hobble critics and help Trump. It is not a “conspiracy theory” to say the Saudis run influence operations in Washington. Rather, it is evident that three pro-Trump powers will undertake dirty tricks on behalf of the man in the White House.

To be sure, Israeli, Russian, and Saudi interests diverge in some areas. Russia has no interest in the U.S.-Saudi-Israeli campaign against Iran. When Trump claimed Iran shot down a U.S. drone in international air space, Russia sided with Iran. Russia state media promote Tulsi Gabbard. Israeli and Saudi media demonize her.

But the pro-Trump axis has enough commonalities that Democrats need not bicker about the details.

Putin and Steve Bannon, apostle of Trumpism, are making common cause with the populist right in Europe. So is Netanyahu.

Just as Israel has a burgeoning spyware industry fostered by the Israeli intelligence services, so Russia’s GRU has created at least two hacking units to wage cyberwar. Both act in their own national interests against Trump’s American opponents.

(See my piece “Spooks for Hire: How Mossad Seeds the Private Intelligence Industry.”)

Israel’s banning of the congresswomen, like the indictment of the IRA and the whitewashing of Khashoggi’s murder, exposes the intent of foreign powers to thwart American democracy.

It has never been more respectable to criticize Israel. From the corporate Obama-Clinton center to the progressive and bleeding-edge socialist left, Israel is now under fire. The disgrace of a president and a prime minister who prevented an American representative from visiting her 90-year-old grandmother is something that Democrats can agree on.

To be sure, the Israel lobby remains powerful in the party. Many Democrats in Congress have doubts about the legitimacy and the viability of the BDS (Boycott, Divestment and Sanctions) movement. But after Omar and Tlaib’s exclusion, the critical tone about Israel has grown harsher.

The travel ban undermined those who say the Israeli government policy isn’t racist. The only two U.S. representatives forbidden from visiting Israel/Palestine are women of color. How do the 41 Democratic representatives who have traveled to Israel explain that? They suddenly face the question: will they stand up to Israeli racism?

Maybe. Maybe not. The party’s rhetoric is gravitating, once again, toward the plainspoken formulation of a certain Jewish guy from Vermont: “Opposing Netanyahu’s policies is not ‘hating the Jewish people,’” Bernie Sanders tweeted Thursday.

Rep. John Delaney (unkindly deprecated as a “human mayonnaise jar” by Naomi LaChance of Splinter) is about the most conservative Democrat running. His microphone-hogging centrism in the Democratic debate has inspired much Twitter sniping from the left. Delaney tweeted, accurately, that Netanyahu had “disrespected” Congress by colluding in Trump’s effort to make Israel a wedge political issue.

Admiral Joe Sestak, a military man and latecomer to the race, said, “Israel should not set American policy.” Not too long ago, such a statement could have gotten a Democratic candidate (or a D.C. political pundit) denounced as an anti-Semite. Now it sounds mild and commonsensical.

The banning of Omar and Tlaib was “appalling,” said Julian Castro. “An affront to the United States,” said Kamala Harris. Jay Inslee called it “state-sanctioned Islamophobia.” No one among the Democrats uttered the a-word — “apartheid.” But they’re getting closer.

The weakest tweets came from Amy Klobuchar and Beto O’Rourke. They responded to Trump’s claim that Israel would be showing “weakness” by admitting the two congresswomen. The Minnesota senator and El Paso congressman countered that Trump is showing “weakness” (in Klobuchar’s words) by “exporting intolerance.” That’s more convoluted than convincing.

Joe Biden, who has been getting a lot of grief for his gaffes, didn’t distinguish himself with the claim that Israel “shares our democratic values.” The banning of Omar and Tlaib was a clear statement that the current Israeli government does not share the democratic values of the Democratic Party in 2020.

That’s the issue, whether Biden likes it or not, and the party’s reaction is not benefitting Israel. To the contrary, the Democratic Party in Washington is more anti-Israel than it was a week ago. And the triple threat to the 2020 election from Tel Aviv, Moscow and Riyadh is clearer than ever.