Kentucky Gov. Matt Bevin may be in real trouble — and Democrats lead in two other races to be decided this fall 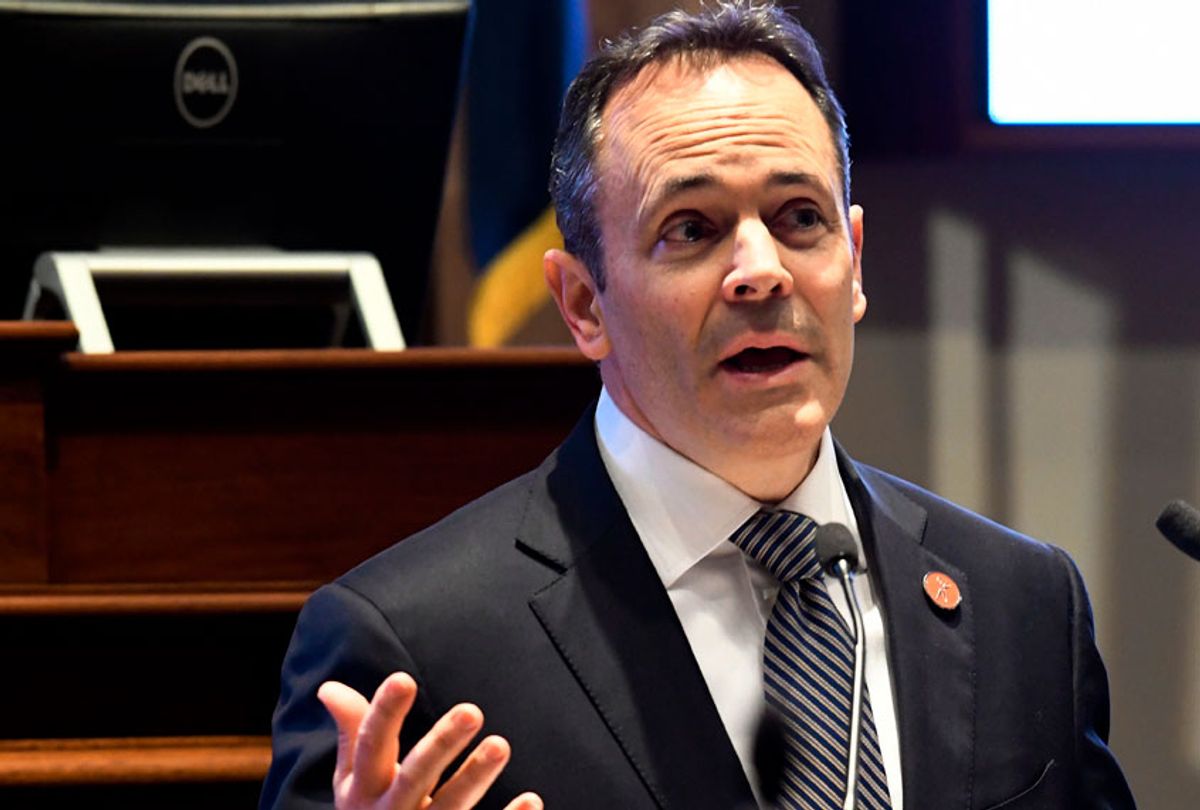 An internal Democratic poll released on Friday found that the party is on track to sweep the top three statewide elections in Kentucky this November.

Though internal polling tends to be more favorable to the party paying for it, these numbers appear in line with other data. According to a Morning Consult poll conducted in July, Bevin is the most unpopular governor in the entire country, holding just a 32 percent approval rating.

Cameron is a former general counsel to Senate Majority Leader Mitch McConnell and Adams is a former aide to the Republican leader. If the statewide races go the way the polls suggest in November, it could spell trouble for McConnell, who is on the ballot next year.

The new poll shows that 56 percent of Kentucky residents have an unfavorable opinion of the Senate majority leader, including 43 percent who said they had a very unfavorable view, while just 39 percent view him favorably.

“What we’re seeing is that Kentuckians are tired of Bevin and McConnell, and that it’s possible for Kentuckians to be supportive of President Trump but choose not to support Bevin, McConnell, and now McConnell’s guy Daniel Cameron,” Sean Rankin, the executive director of the Democratic Attorneys General Association, said in a statement. “As a Kentuckian with a lot of family in the state, we need to make sure the people who are elected put people above politics.”

Bevin, who won his first race with just 52 percent of the vote, dismissed polls showing him as America’s most unpopular governor, telling the Lexington Herald-Leader that he has never done well in popularity polls.

Democrats say the polls show that Republican policies are failing.

“Kentuckians are rejecting Matt Bevin’s weak and failed time as governor because he bullies teachers, tries to tear down public education and supports ripping away protections for people with pre-existing conditions,” Kentucky Democratic Party spokeswoman Marisa McNee told the Herald-Leader. “Working families know they’re falling behind on Bevin’s watch, and it’s time for a change.”

While Democrats are optimistic about their prospects in Kentucky this year, many also hope that they can unseat McConnell next November.

Democrat Amy McGrath, a former Marine fighter pilot, raised a lot of money after becoming the first Democrat to jump into the Senate race but her campaign has stumbled out of the gate. State House Minority Leader Rocky Adkins and sports radio host Matt Jones are considering jumping into the race, though they have not yet formally done so.

It’s unclear whether any of them can break through in a state as red as Kentucky, which FiveThirtyEight pegs as 23 points more Republican as the country as a whole. Unlike the Republican state-level candidates running this year, McConnell has the advantage of running on the same ticket next year as President Trump, who won Kentucky in 2016 by a full 30-point margin, 62-32.

There is hope for Democrats, however, given Trump’s falling popularity. Trump’s approval rating fell by 19 net points in Kentucky over his first two years in office, according to a Morning Consult analysis. That's the president's biggest drop Trump in any Southern state.